With the 2013 government shutdown and debt ceiling crisis now behind us, one conclusion seems inescapable — this was a disaster for the Republican Party. While both major parties received negative reviews from the American public for their performance in the crisis, it was the GOP that took by far the bigger hit to its image and standing in national polls. In the midst of the crisis, the Gallup Poll found that the percentage of Americans rating the Republican Party unfavorably was the highest ever recorded for either party since they began asking the party favorability question in 1992.

The shutdown and debt limit impasse were almost exclusively the work of the Tea Party and its allies inside and outside of Congress. External groups like Heritage Action and FreedomWorks along with right-wing media commentators like Rush Limbaugh played key roles as cheerleaders for these confrontations. And members of Congress affiliated with the Tea Party, most prominently first-term Sen. Ted Cruz (R-TX), were the strongest supporters of the shutdown and debt ceiling conflicts and the most vocal opponents of the deal to end the crisis.

In the aftermath of the crisis, there are signs of a growing divide within the GOP between establishment conservatives and the Tea Party. A number of prominent Republicans including Sen. John McCain (R-AZ) and some conservative business groups that are closely allied with the Republican Party, like the U.S. Chamber of Commerce, have been calling for a clean break between the GOP and the Tea Party. There has been talk of sponsoring challengers to Tea Party incumbents in some 2014 Republican congressional primaries, and some are even organizing SuperPACs to aid establishment candidates against Tea Party opponents. But how serious is this emerging divide and how likely is it that such challenges could succeed?

Evidence from the 2012 American National Election Study (ANES) makes it very clear why the Tea Party poses a serious threat to the future viability of the Republican Party in national elections. But these data also show why any attempt by the GOP establishment to challenge the influence of the Tea Party will be very risky and could easily backfire.

The 2012 ANES involved interviews conducted in person and online with well over 5,000 voting-age Americans. Among voters in the ANES sample, Barack Obama defeated Mitt Romney by a margin of about six percentage points, which was only slightly larger than Obama’s actual margin in the election of about four points. In addition to asking respondents about their presidential vote choices, the ANES survey included questions asking about election-related activities and attitudes toward the candidates, parties and issues in the election, including opinions of the Tea Party. Respondents were asked to place themselves on a seven-point scale measuring support for the Tea Party with the end points of the scale labeled “strongly support” and “strongly oppose.”

Table 1: How representative is the Tea Party? 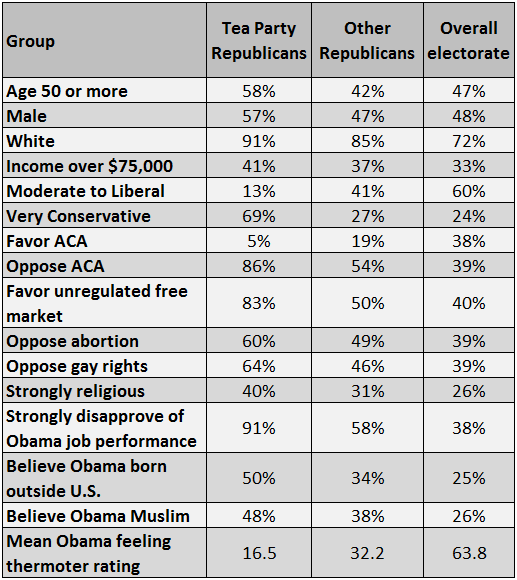 Table 1 compares selected social characteristics and attitudes of Republican Tea Party supporters with those of other Republicans and the overall electorate in 2012. These data show very clearly why the Tea Party movement poses a major threat to the future viability of the Republican Party in national elections. Contrary to the frequent claims made by Tea Party leaders that they represent a majority of Americans, the results in Table 1 show that Tea Party supporters stood out in many respects from other Republicans and were highly unrepresentative of the overall electorate.

The differences between the social and political attitudes of Tea Party Republicans and those of the overall electorate were even more dramatic. These Tea Party supporters were much more conservative than the American public on social as well as economic issues, more religious and much, much more negative in their opinions of Barack Obama.

It is their overwhelmingly negative opinions of the president that perhaps most distinguish Tea Party supporters from the overall American public. A stunning 91% of Tea Party supporters strongly disapproved of the President’s job performance, and the average rating that they gave to Obama on a feeling thermometer scale which has a range from zero degrees to 100 degrees was a frigid 16 degrees. About half of Tea Party supporters indicated that they believed, contrary to all evidence, that Obama was born outside of the United States (which would make his presidency illegitimate) and that he is a Muslim. 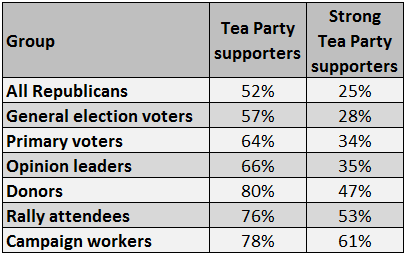 These results indicate why it will be very difficult for mainstream Republican leaders and business groups to successfully challenge Tea Party incumbents and why such efforts could even backfire on the party establishment. Tea Party supporters now dominate the activist base of the Republican Party. In 2012 they made up nearly two-thirds of those who reported voting in Republican presidential primaries, and in 2014 they may well make up an even larger majority of those voting in what are likely to be very low turnout congressional primaries. Some might argue that the recent special election GOP primary in Alabama’s 1st Congressional District might augur well for the Republican establishment as the establishment-backed candidate defeated the Tea Party-backed one. However, it was a narrow five-point win that saw overwhelming resources put at the establishment candidate’s disposal. If anything, the ANES survey data suggest that a more realistic scenario in next year’s primaries is that more establishment Republican incumbents will be unseated by Tea Party challengers.