On Tuesday, an important deadline came and went in Alaska’s gubernatorial race: the final day that a candidate could officially withdraw and not appear on the November ballot. Since former Sen. Mark Begich (D-AK) entered the race on June 1, the final day to file as a candidate, Democrats have worried that he and Gov. Bill Walker (I-AK) might draw from some of the same base of support in the general election, easing the GOP’s path to victory. Walker, a former Republican, ran as an independent with a Democrat as his lieutenant governor nominee in 2014 (Byron Mallott, who is on the same ticket with Walker again), and was something of a de facto Democratic candidate four years ago (there was no Democrat on the ballot). Given the Democrats’ concern about fragmenting the vote, the Sept. 4 deadline to withdraw loomed large, especially as behind-the-scenes dealmakers tried to push Begich or Walker to get out. Begich announced on Tuesday that he would hold an afternoon press conference, leading to speculation that he planned to exit the race, thus preventing a likely split of the left and center in a right-leaning state. However, the former senator instead announced at the presser that he would remain in the race, setting Alaska on course for its latest three-way gubernatorial melee. Begich’s decision makes former state Sen. Mike Dunleavy (R) at least a slight favorite in the Alaska race, so we are moving the gubernatorial rating there from Toss-up to Leans Republican. 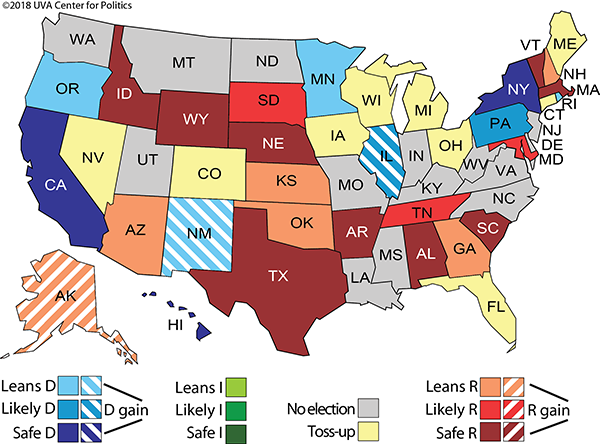 Alaska has a history of three-way contests for governor. Since its first gubernatorial election in 1958, five of its 15 elections have featured a third-party, independent, or write-in candidate who won at least 13% while both a Democrat and a Republican were on the general election ballot. In those five cases, Democrats won three times, Republicans once, and a third party once. In the latter case, former Gov. Wally Hickel (R-AK) ran as a more conservative alternative to the GOP nominee in the 1990 election. Running as the Alaska Independent Party’s nominee, Hickel won 39% and defeated former Anchorage Mayor Tony Knowles (D), who won 31%, and state Sen. Arliss Sturgulewski (R), a pro-choice Republican who won 26%. The Last Frontier is also tied with Maine for the largest number of plurality — i.e. less than 50% — winners in gubernatorial elections going back to 1958: nine. While Democrats have arguably benefited more often from crowded Alaska races than the GOP, this cycle looks like it might be different. Although there’s been little polling in the Alaska race, surveys have shown Dunleavy consistently with the lead, with either Walker or Begich running second. Now the Crystal Ball’s rating reflects the GOP’s edge, though there may be more twists and turns to come. After all, either Begich or Walker could hypothetically stop campaigning and encourage supporters to back the other non-Republican in the race. However, both of their names would remain on the ballot in that scenario, which would complicate matters. A situation somewhat like this occurred in Maine’s 2014 gubernatorial race, when independent Eliot Cutler told supporters just a few days before the election that they should vote for another candidate if they did not believe Cutler could win. Cutler’s 8% share of the vote in the election probably reflected his sort-of withdrawal, at least to some degree, as he had won 36% in Maine’s 2010 gubernatorial race and finished a close second to current Gov. Paul LePage (R-ME).

Republicans benefit from two of the three ratings changes we’re making this week, although that doesn’t change our overall assessment of the House (Democrats favored, but not overwhelmingly so):

Rep. Carlos Curbelo (R, FL-26) — Toss-up to Leans Republican: Curbelo, a Republican who operates closer to the political center than the vast majority of his colleagues, is one of the strong incumbents Republicans have in swing seats. Though Hillary Clinton won his district by double-digits, it is more Republican down the ballot (as are other parts of South Florida). Curbelo has led even in Democratic polling and he seems like one of the Clinton-district Republicans best positioned to survive even in a wave environment. His opponent, former state Senate candidate Debbie Mucarsel-Powell (D), has raised impressive amounts of money but Curbelo still has a more than two-to-one cash on hand advantage per the most recent reporting. This should still be a very competitive race but Curbelo probably has an edge.

Rep. Rod Blum (R, IA-1) — Toss-up to Leans Democratic: Blum, something of a surprise winner in both 2014 and 2016 as his district turned right after supporting Barack Obama in both the 2008 and 2012 presidential elections, is being mentioned in news reports as someone that national Republican outside groups may eventually decide to write off (although they have not yet, as far as we can tell). Democrats have argued that state Rep. Abby Finkenauer (D) is in good shape in this race and that the district’s Democratic history is reasserting itself in a good midterm environment for the party. Blum also got some unwelcome news earlier this week, when the House Ethics Committee announced it is investigating Blum over an omission of his involvement in a business on his disclosure form that Blum has said has been corrected (the Des Moines Register has more details). One caution: Finkenauer, at 29, would be young for a new member of the House, and she will need to continue to prove herself in a district that is older than the national average. But we think she’s a small favorite for now, and this rating change solidifies Blum’s status as one of the most vulnerable Republican incumbents in the country.

Rep. Matt Cartwright (D, PA-8) — Likely Democratic to Leans Democratic: The new Pennsylvania House districts, which the Democratic-controlled state Supreme Court substituted for a Republican-drawn map, largely benefited Democrats and should allow them to net several seats in the Keystone State as a whole. However, Republicans are targeting a northeastern district, PA-8, that covers Scranton/Wilkes-Barre and other places where Trump ran well ahead of Mitt Romney’s showing in 2012 (Trump won the new district by about 10 points, similar to his showing on the previous version of the map). So Cartwright is representing a district that changed significantly in terms of its terrain — only about half of the voters in Cartwright’s old district live in the new PA-8 — and his opponent is a credible self-funder, businessman John Chrin (R). Republicans have been talking up this race for months, and the National Republican Congressional Committee backed up those words with a nearly half-million dollar ad buy in the district. Democrats have been bullish on Cartwright; we think he’s still favored but PA-8 is probably one of the best half-dozen or so GOP offensive targets on a national playing field where the party is mostly playing defense.

Senate: Arizona gets its replacement for John McCain — but for how long?

With the ceremonies and burial complete for Sen. John McCain (R-AZ), Gov. Doug Ducey (R-AZ) announced his choice to fill McCain’s vacant Class III Senate seat. And the pick has one of the most familiar names in Arizona politics: ex-Sen. Jon Kyl (R), who served in the Senate from 1995 to 2013 after first winning the state’s Class I seat in the 1994 Republican Revolution. Kyl, who has the shortest name of any U.S. senator ever, opted to accept Ducey’s offer but appears inclined to be only a temporary choice. That could mean serving until a new senator is elected in the November 2020 special election for the seat, but it could also mean that Kyl might only serve a few months before stepping down. If Kyl were to resign the seat prior to the 2020 special election, his exit would necessitate another appointment by Ducey — or David Garcia (D), Ducey’s Democratic opponent in November, should he defeat the GOP incumbent. If Garcia were to win, however, he would still have to nominate a Republican to the seat in case of a vacancy because of a state law that requires a U.S. Senate appointment to be from the same party that previously held the seat.

The fact that Kyl may not serve until a replacement is duly elected raises the possibility that, should it come to it, Ducey might appoint Rep. Martha McSally (R, AZ-2) to the seat to replace Kyl if she loses her Toss-up Senate contest again Rep. Kyrsten Sinema (D, AZ-9) this November. So one way or another, McSally may become a senator in the 116th Congress. But multiple appointments for the same seat prior to an election to fill said seat would be highly unusual, especially without an appointee dying. Since 1913, when popular elections for the U.S. Senate began, a senate seat has had multiple appointees before a general election only four times, and just twice without one of the appointees dying and necessitating another appointment. This doesn’t include cases where a newly-elected senator was appointed to the seat for a few days at the end of the previous Congress after the appointed senator resigned to give the incoming senator more seniority (technically, this category includes the wild 1974-1975 contested Senate election in New Hampshire). The three multiple-appointee cases are as follows: In October 1921, Sen. Philander Knox (R-PA) died, precipitating the appointment of Sen. William Crow (R). But then Crow died on Aug. 2, 1922, creating another vacancy prior to the November general election. The new appointee was David Reed (R), who had won the May primary to run as the GOP nominee in both the concurrent special and regular general elections for the seat; he easily won both in November. In July 1941, Sen. James Byrnes (D-SC) resigned from the Senate to take a seat on the U.S. Supreme Court, leading Gov. Burnet Maybank (D) to appoint Alva Lumpkin (D) in Byrne’s place on July 17. But Lumpkin became ill and died on Aug. 1, forcing Maybank to then appoint Roger Peace (D-SC) to the position. Maybank then won the Sept. 30 special election for the seat. The only other case did not involve the first appointee dying: In August 1937, Sen. Hugo Black (D-AL) resigned from the Senate to take a seat on the U.S. Supreme Court. Gov. Bibb Graves (D) opted against appointing the most likely choices for the seat to avoid favoring any Democratic faction in the one-party state and instead appointed his wife, Dixie Bibb Graves, to the seat a few days after Black resigned. In the Jan. 4, 1938, special primary for the April special general election, Rep. Lister Hill (D, AL-2) won the Democratic nomination. Now-Sen. Dixie Bibb Graves (D) then resigned the seat on Jan. 10 and her husband appointed Hill to the seat on Jan. 11. So in two of these three cases, the second appointee had already won the party’s nomination for the ensuing election for the Senate seat.

With Kyl’s appointment, he also joins a rare group by becoming the 24th senator in the modern era the U.S. Senate (post-17th Amendment in 1913) to sit in both of a state’s Senate seats. Note that three of those 24 senators actually held one of their state’s Senate seats entirely before 1913 and then held the other after popular elections started, so 21 senators separately sat in each of their state’s seats after 1913. In Kyl’s case, he previously represented the Class I seat and now sits in the Class III seat. He is not the first Arizona senator to do this, however. Sen. Barry Goldwater (R-AZ) won Arizona’s Class I seat in 1952, won reelection in 1958, and then gave up a reelection run in 1964 to seek the presidency. After losing the 1964 presidential contest, Goldwater reentered Washington politics by winning Arizona’s Class III seat in 1968 upon the retirement of seven-term Sen. Carl Hayden (D-AZ). Goldwater would hold that seat until his retirement in 1986, when Rep. John McCain (R, AZ-1) won the seat to enter the Senate.