Another prominent establishment-oriented Republican is leaving the U.S. House of Representatives. Rep. Steve Stivers (R, OH-15), a former chairman of the National Republican Congressional Committee, announced Monday that he is resigning in mid-May to become the president of the Ohio Chamber of Commerce. Stivers appeared to be gearing up to run for the state’s open U.S. Senate seat, so the news comes as something of a surprise.

Stivers’ eventual resignation sets up another House special election for later this cycle. OH-15 covers some western and southern Columbus suburbs as well as more rural counties both southwest and southeast of Ohio’s most populous city. Donald Trump carried the district 56%-42% in 2020, slightly less than his 2016 margin. This is a more Republican district at the presidential level than OH-12, which covers the northern Columbus suburbs and more rural areas north and east of Columbus and which featured a highly-competitive 2018 special election between now-Rep. Troy Balderson (R) and Franklin County Recorder Danny O’Connor (D). OH-12 voted for Trump by just six points in 2020, down from 11 in 2016. A key difference between OH-12 and OH-15 is that the former has a considerably above-average percentage of residents over 25 with a four-year college degree (a little over 40%), while OH-15 is right around average (a little over 30%). A higher percentage of degree-holders has been a key indicator of a trend toward Democrats in recent years across the country.

Additionally, and as we noted in our piece on House special elections last week, House specials are likelier to break against the president’s party. The 2018 OH-12 special happened with Donald Trump in the White House; now Joe Biden is president. That factor alone likely improves Republican chances of holding OH-15 without too much of a problem.

The OH-15 special likely won’t happen until later this cycle; the general election for another U.S. House special in Ohio, the heavily Democratic OH-11 that runs from Cleveland to Akron, isn’t happening until November.

We’re starting the special election race as Likely Republican, and it’s probably closer to being Safe Republican than it is to being Leans Republican. There is a deep bench of potential Republican candidates for the seat, although Democrats may also be able to produce a strong nominee given their strength in Columbus’ Franklin County. O’Connor is someone to watch: He announced recently that he was planning to run for Congress again in 2022, but he did not indicate the district in which he would be running, likely because the map in Ohio (and in every other state with more than one House district) is still up in the air. In all likelihood, there will continue to be a safe Democratic seat covering Columbus and central Franklin County (currently OH-3, held by Democratic Rep. Joyce Beatty), with Republican-leaning seats around it. Regardless, the eventual winner of the special election will have to run for reelection in a differently-configured district than the current OH-15.

Speaking of specials… a word on LBJ, 1937, and court-packing

In response to last week’s history of House special elections since 1957, reader Sammy Finkelman reminded us that President Lyndon B. Johnson got his electoral start in a 1937 U.S. House special election. Johnson ran in TX-10, which then covered Austin and what was then a surrounding constellation of tiny towns and rural areas. “Many of the district’s country people lived in towns too small to be marked on any map,” wrote Robert Caro in the first volume of his LBJ biography series, The Path to Power.

Johnson triumphed with just 28% of the vote, though his next-closest competitor only won 17%. All of the candidates were Democrats, and there was no runoff — unlike special elections in present-day Texas. In the upcoming TX-6 special election, there will be a runoff unless one of the nearly two-dozen candidates wins a majority of the vote in the first round of voting, which seems very unlikely.

Johnson ran as a strong supporter of then-President Franklin Delano Roosevelt, even backing FDR’s controversial (and ultimately unsuccessful) plan to expand the Supreme Court — or “pack” it, depending on one’s opinion of the plan — by adding members to it.

Expanding/packing the court is back in the news, with a proposal by House Judiciary Committee Chairman Jerry Nadler (D, NY-10) and Sen. Ed Markey (D-MA) to add four members to the court, presumably flipping the court’s 6-3 conservative majority into a 7-6 liberal majority with four additional nominations by President Biden. But Speaker of the House Nancy Pelosi (D, CA-12) said she did not intend to bring the legislation to the floor, and Biden recently created a commission to study the courts — which, like many commissions before it, probably won’t lead to massive, actual changes. This all comes in the wake of several conservative victories in the judicial wars that have rankled liberals: Senate Republicans’ blockade of President Obama’s nomination of Merrick Garland in advance of the 2016 election followed by their confirmations of two Donald Trump appointees, Brett Kavanaugh before the 2018 election and Amy Coney Barrett before the 2020 election.

On the other side of Capitol Hill, one Senate contest that has been heating up in the past weeks is North Carolina’s. The retirement of three-term Sen. Richard Burr (R-NC) has left an open seat in a state where Democrats have come close in many recent senatorial elections but haven’t actually sealed the deal since 2008.

Last week, former Gov. Pat McCrory (R-NC) got into the Republican primary. Former Rep. Mark Walker (R, NC-6) has already been in the race and has racked up some important endorsements, but his latest fundraising report was not impressive. McCrory was mayor of the state’s largest city, Charlotte, from 1995 to 2009, and self-identified as a pragmatic “Eisenhower Republican.” However, after winning the governorship in 2012, on his second try, he was pushed rightward by a conservative legislature and was defeated by now-Gov. Roy Cooper (D-NC) in 2016.

In his first two statewide runs, McCrory had considerable crossover appeal in the Charlotte area — he only barely lost Mecklenburg County in 2008 and carried it in 2012. But in 2016, much of that support collapsed, as he signed the state’s controversial “bathroom bill,” which prompted some businesses to boycott the state. (Map 1) 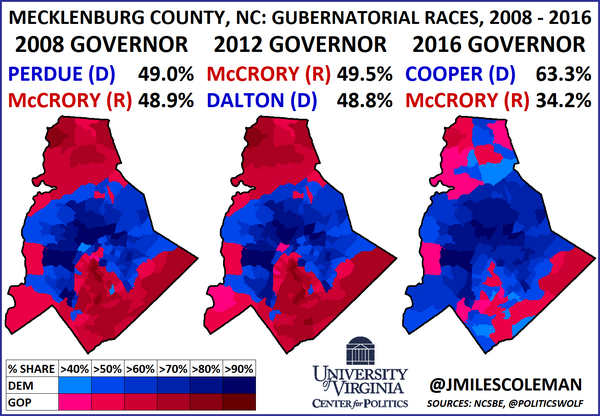 So if McCrory, though a transitional figure in the state’s politics, makes it to the general election, he likely won’t have much of an “electability” bonus in his home region — this is certainly something his primary opponents will claim. In south Charlotte, once his political base, Unaffiliated voters now dominate this formerly-Republican area. Given North Carolina’s semi-closed primary system, those Unaffiliateds could support him in the Republican primary, but they’d also have the option to vote in the Democratic primary.

Still, McCrory enters the primary with high name recognition, and could perform well, in the primary, in other parts of the Charlotte area.

Rep. Ted Budd (R, NC-13), who hails from the state’s very Republican Piedmont region, appears poised to enter the race. Lara Trump, the former President’s daughter-in-law who is originally from the coastal city of Wilmington, continues to be mentioned as a candidate. One other potential candidate, Lt. Gov. Mark Robinson (R-NC), said Monday night that he is not going to run.

The most prominent Democratic candidate in the race is state Sen. Jeff Jackson. Jackson, who — coincidentally — represents the area McCrory is from, got in the race in January and is in the process of touring all the state’s 100 counties. Former state Supreme Court Justice Cheri Beasley is a likely candidate, as well. Beasley was very narrowly defeated last year, and she received more raw votes than Biden.

Overall, North Carolina probably isn’t Democrats’ best offensive opportunity, as the Crystal Ball rates it as Leans Republican. Still, by this time next month, the primaries there, on both sides, could be looking a bit more competitive.

On Thursday evening, the Center for Politics hosted the Brennan Center’s Theodore Johnson; Emory University’s Andra Gillespie; UCLA’s Natalie Masuoka; and the Pew Research Center’s Mark Hugo Lopez for the discussion “The Changing Face of America: Voters of Color in the 2020 Election.” They discussed several trends among voters of color, including the gender gap within certain minority groups, the importance of Black voters in Joe Biden’s victory, Republican growth among Hispanic voters, the value of “descriptive representation,” and much more.

To see the program, see this direct link or visit our YouTube channel, UVACFP.

On Wednesday from 4 p.m. to 5 p.m., the Center for Politics will be hosting His Excellency Lazarous Kapambwe, Ambassador of Zambia to the United States. Kapambwe will speak about the relationship between Zambia and the United States, current successes and challenges in the country, and the state of civil discourse in Zambia. The virtual event is free to attend, and more information is available on Eventbrite.