The challengers to former Gov. Terry McAuliffe (D-VA) in the Old Dominion’s June 8 Democratic gubernatorial primary are running out of lifelines.

McAuliffe already holds a sizable lead in polls: both the Democratic firm Public Policy Polling and the nonpartisan Wason Center at Christopher Newport University have found his support over 40%, with none of his four opponents cracking double digits. With no runoff, McAuliffe benefits not only from his name ID and money advantages, but also from a splintered field: former state Del. Jennifer Carroll Foy, state Sen. Jennifer McClellan, Lt. Gov. Justin Fairfax, and state Del. Lee Carter all have been unable to clearly distinguish themselves from their rivals. Without consolidation, it’s hard to see how McAuliffe loses.

On Monday, the Washington Post editorial board endorsed McAuliffe. Newspaper endorsements typically don’t mean much, but there is some belief in Democratic circles that the Post’s backing is valuable in a Democratic primary in vote-rich Northern Virginia. So McAuliffe, who already owns many advantages in this contest, now holds another. Perhaps more importantly for him, this arguable endorsement advantage did not pass to one of the other candidates.

Early voting for the primary began a few days ago, so time is really growing short for the non-McAuliffe candidates.

The Republican nomination will be decided in a convention on Saturday, May 8. Virginia allows parties to use different nominating methods for different races, and Democrats opted for a primary while Republicans opted for a convention. But in response to the pandemic, the “unassembled” convention is being held at roughly 40 satellite locations across the commonwealth instead of at a central location, and voters will use ranked-choice voting to simulate what is often a multiple ballot winnowing at a traditional, in-person convention. If no one gets majority support on the first ballot, which seems unlikely with seven candidates, the ranked-choice voting system will kick in, with the lowest-performing candidate eliminated first and the votes cast for them reallocated based on the ranked-choice. The process will continue until someone wins a majority.

Close to 53,000 people signed up to be a delegate in this convention, according to the Republican Party of Virginia. To put that into some context, about 8,000 delegates attended the 2013 Virginia Republican statewide nominating convention, so this should be a much larger universe of participants than that convention. On the other hand, about 366,000 votes were cast in the 2017 Republican gubernatorial primary, so this convention electorate will only be a small fraction of the size of a normal primary electorate.

Some party leaders are saying that Youngkin may be the GOP frontrunner primarily because of a big campaign operation powered by his considerable personal wealth, but others caution that the unusual form of this nominating “convention” makes this contest unpredictable, especially when factoring in the ranked-choice voting system.

The candidates are aware of the importance of educating delegates about the process. On Tuesday, Cox released a video asking delegates to consider marking him second if they are voting for someone else first.

Virginia Republicans are surely hoping the vote goes smoothly despite the ranked-choice component and unusual format, especially given the (in our view unfounded) suspicions about voting that former President Donald Trump has nurtured among Republicans. Chase, the most Trump-like candidate in the field, unsuccessfully sued over the choice to hold a convention, which some believe party leaders chose in order to block her from winning a higher-turnout primary. Determining the winner likely will take days, per reporting from the Washington Post, and we know from last November’s experience that a delayed vote count can spur conspiracy-mongering. However, this count will be tallied by hand as opposed to by a computerized method after some of the candidates questioned the latter process, which Republican Party of Virginia Chairman Rich Anderson told the Post should give the candidates confidence in the process.

Democrats will start favored in the general election, assuming McAuliffe is the nominee. It’ll then be a question of how strong the GOP nominee performs and whether the overall political environment for Democrats weakens between now and November. The Virginia gubernatorial race often breaks against the party in the White House, giving Republicans hope for their first statewide win since 2009, although McAuliffe bucked the presidential party curse with his narrow victory in 2013.

In an intraparty runoff over the weekend, voters in Louisiana’s 2nd District — the state typically holds elections on Saturdays — elected Democratic state Sen. Troy Carter over fellow state Sen. Karen Carter Peterson. This Black-majority district has long been based in New Orleans, though LA-2 now follows the Mississippi River up to Baton Rouge.

When the seat’s previous occupant, former Rep. Cedric Richmond (D, LA-2), resigned to take a job in the Biden administration in January, Louisiana was left with an all-Republican congressional delegation for the first time since 1875 (though there was no question that a Democrat would eventually win the resulting special election).

In last month’s jungle primary, Carter finished with 36% to Peterson’s 23%, but a surprisingly strong third place finisher was Gary Chambers, an activist and first-time congressional candidate. In something of an irony, though Chambers was from Baton Rouge, some of his strongest precincts were in Peterson’s state Senate district, which includes wealthier, and gentrifying, New Orleans neighborhoods. In the runoff, Chambers endorsed Peterson, who tried to position herself as an “unapologetic progressive.”

Though Carter courted Republicans, it wouldn’t be entirely fair to characterize the runoff as a case of a moderate against a liberal. Carter received support from most other Democratic state senators in the district, as well as some leading progressives in New Orleans. This was a contrast to Peterson, whose endorsement roster included Rep. Alexandria Ocasio-Cortez (D, NY-14) and Stacey Abrams, Democrats’ 2018 nominee for Georgia governor. So if anything, a local versus national dynamic seemed more at play.

Map 1 shows the breakdown of Saturday’s election; it was a clear win for Carter, who took just over 55%. 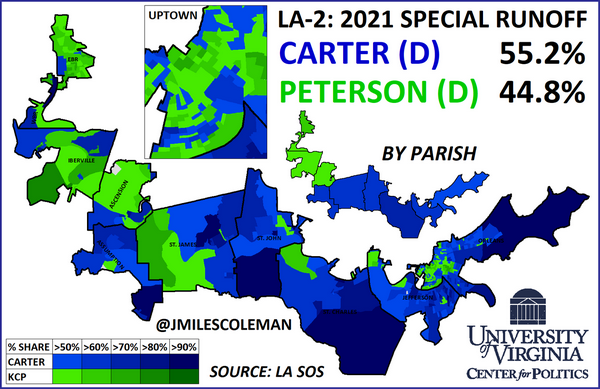 Much of Peterson’s strength was in the Baton Rouge metro area, on the western extreme of the district. Though Baton Rouge Mayor-President Sharon Weston Broome endorsed Carter, Peterson (despite her anti-establishment rhetoric) spent much of the past decade chairing the state Democratic Party, so she probably had some name recognition in the capital region. There was also evidence that her endorsement from Chambers provided in a boost in parts of New Orleans: precincts that supported Chambers in the primary broke 63%-37% for Peterson in the runoff. While it ultimately wasn’t enough, her showing in those areas helped her keep Orleans Parish competitive, as she only lost it 53%-47%.

Carter’s formula for success seemed three-pronged. First, he ran up the score in the River Parishes, located between the two main metros; in general elections, these parishes are, on balance, less Democratic than LA-2 overall. Carter’s margins in these more rural parishes suggested that reaching out to Republican voters, though very much a minority bloc in the district, paid dividends. State analyst John Couvillon estimated that, outside of Orleans Parish, Carter got over 80% of the white vote.

Carter’s 67% share in Jefferson Parish, which makes up about one-fifth of the district, was also key. LA-2’s holdings in Jefferson Parish are basically coterminous with the Westbank, an area that is, visually, south of the Mississippi River, but technically on the western half of the continental United States (using the river as the dividing line). The Westbank is home to a diverse, but working class, electorate — so essentially the types of voters who’d be most turned off by an overly nationalized campaign. Carter represents a few Westbank cities in the state Senate.

A third ingredient to Carter’s win seemed to be his campaign’s emphasis on the early vote. In the 2020 general election, the polarization of voting methods — with Democrats voting early and Republicans waiting until Election Day — was a theme in many states. That type of sorting could play a role in future primaries and intraparty races.

About 30% of the vote tallied on Saturday was cast early, and Carter won that group by a nearly 60%-40% spread (he still won the Election Day vote, but by a smaller 7% margin). Couvillon found that the early electorate skewed older, with about two-thirds of those voters being over 65 years old. The Peterson campaign seemed more reliant on turning out younger voters on Election Day.

LA-2 was always going to be a safe hold for the Democrats, but its result raises some questions for future elections. Will urban voters in gentrifying neighborhoods continue to push for more progressive candidates? Some 2020 primary results, such as Rep. Carolyn Maloney’s (D, NY-12) close call and now-Rep. Cori Bush’s (D, MO-1) victory, suggest that Chambers and Peterson’s strength with urban white liberals was part of a national trend. Secondly, will these candidates try to bank more of the early vote?

While these trends are worth watching, the broader electorate in this Democratic seat still went with the more “cautious” candidate. In that way, LA-2 may have some parallels with Virginia — Democrats in the Old Dominion seem to prefer McAuliffe, who’s framed himself as a “safe” choice, against his more stridently liberal opponents. With its open primary, Virginia’s format is also somewhat similar to Louisiana’s jungle primary, as voters other than partisan Democrats can weigh in.

Finally, though they no longer share a party affiliation, Carter will have something in common with Sen. John Kennedy (R-LA): Both got to Capitol Hill on their third attempts. Carter ran for LA-2 in 2006, in a field that included Peterson, and 2010, against Richmond — Louisiana politics often feels like a small world. Kennedy ran unsuccessfully for Senate in 2004 as a Democrat, then lost again, as a Republican, to then-Sen. Mary Landrieu (D-LA), but finally won in 2016. Sometimes, in politics, persistence pays off.