Overall, the basic contours of the 2020 presidential election mostly lined up with the fault lines of 2016 — in the Center for Politics’ post-2020 book, A Return to Normalcy, Crystal Ball Senior Columnist Alan Abramowitz observed that if one simply added 3 points to Hillary Clinton’s margin in each state, it would be a fair predictor of Joe Biden’s showing. While this method held up for Texas at the statewide level (Biden did 3.4 points better than Clinton there), South Texas stood out as a region where Donald Trump made substantial gains.

In the redistricting process, Texas Republicans seemed to keep that in mind when drawing the 3 seats that cover the Rio Grande Valley. TX-15, which has never been held by a Republican, was reconfigured from Biden +2 to Trump +3 (we currently rate it as Leans Republican). Meanwhile, Rep. Henry Cuellar (D, TX-28) kept a single-digit Biden seat, and TX-34, a Biden +16 seat, seemed to act as a Democratic sink (Rep. Vicente Gonzalez currently holds TX-15, but was drawn into TX-34 and decided to run there after the district’s current representative, Filemon Vela, announced his retirement).

Last week, FBI agents raided Cuellar’s home. Although Cuellar says he will cooperate and has committed no wrongdoing, the investigation certainly raises eyebrows. His campaign launched an ad buy shortly after news of the raid broke. Though this may help contain any potential damage, the state’s March 1 primary is approaching fast — and he has serious opposition: Cuellar, a pro-life Blue Dog, faces a rematch with Jessica Cisneros, a progressive who nearly beat him in 2020.

Despite the pro-Trump trend South Texas saw in 2020, Cuellar kept considerable crossover support, which is why we started this Biden +7 seat out as Likely Democratic. But even if Cuellar is cleared of any possible wrongdoing, the imagery of the FBI search may still damage his standing — and if he loses the primary to Cisneros, she very well may be weaker than Cuellar has been with a general electorate. Given the recent developments in this race, we’re bumping the rating down to Leans Democratic.

On the other side of the Rio Grande Valley, we are also downgrading TX-34 from Safe Democratic to Likely Democratic. As we noted last week, Biden’s current approval numbers with some key minority groups are subpar (the district is 90% Hispanic). Though the district was drawn to pack Democrats, as Map 1 shows, its lean has still eroded. 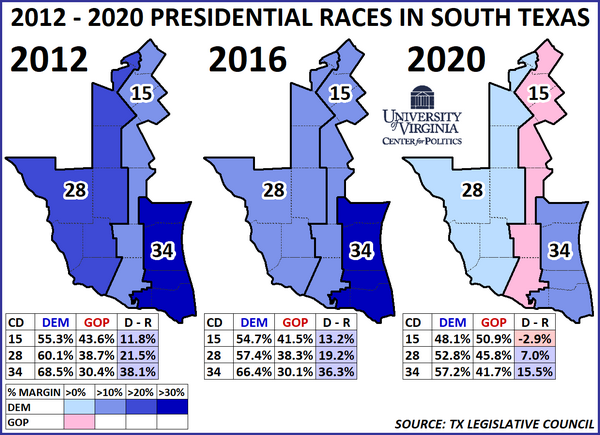 Though Republicans probably won’t sweep all 3 South Texas districts this cycle, 2022 could still be a rough year for Democrats there. In fact, if their numbers with Hispanics continue to drop, Democrats’ dream of a blue Texas could be set back several cycles.

Then-Lt. Gov. Kim Reynolds (R-IA) ascended to the Hawkeye State’s governorship in 2017 after then-Gov. Terry Branstad (R-IA) became ambassador to China. She won by about 3 points in 2018, part of several narrow Republican gubernatorial victories in competitive states (Florida, Georgia, and Ohio were others) that prevented 2018’s gubernatorial races from becoming a calamity for Republicans (Democrats did still net 7 governorships, but it could have been more).

As she seeks a second full term, Reynolds’s path appears much clearer this time. Unlike many of her Republican peers, Reynolds does not have to worry about a primary. The most prominent Democratic challenger to Reynolds is Deidre DeJear, who lost the 2018 secretary of state race to incumbent Paul Pate (R). DeJear lost 53%-45%. That wasn’t necessarily a blowout, but DeJear did get the lowest share of the vote of any of the Democrats running for statewide executive offices that year. In the most recent fundraising reports, Reynolds reported an imposing $4.8 million cash on hand, while DeJear had just $8,500.

Iowa is a reddening state and this is shaping up to be a Republican-leaning year, the opposite of the 2018 Democratic-leaning environment that Reynolds survived as an incumbent who had not been elected in her own right. Reynolds should be fine in 2022 (she has not officially announced her reelection bid, but she is certainly acting like someone who is running again). We’re moving this race from Likely Republican to Safe Republican.

Compared to the busy stretch around the holidays, the past few weeks have seemed relatively quiet on the redistricting front. Still two red states have just enacted maps: Kentucky and Mississippi. In terms of expected partisanship, neither state’s plan will mark a departure from their current arrangements.

In Kentucky, the process included some drama. Republican legislators could have tried to shut Democrats out of the state’s 6-member congressional delegation, but they opted for a plan that should keep the current 5-1 split intact. The legislature’s plan was nonetheless met with Democratic Gov. Andy Beshear’s veto pen. While Republicans hold heavy majorities in both chambers of the state legislature, a simple majority is adequate to override gubernatorial vetoes. So just as we saw in Maryland, the minority-party governor’s veto was almost instantly overridden. Map 2 shows the enacted Kentucky plan.

District 3, the sole Democratic-held district in the state, saw almost no changes: aside from about two-dozen precincts east of I-265, it is coterminous with Jefferson County (Louisville). Though Rep. John Yarmuth (D), who flipped the seat in 2006, is retiring, Jefferson County gave Biden a margin of just over 20 points. Since the days of Andrew Jackson, Kentucky has kept at least one member of Old Hickory’s party in its delegation (although during the Civil War, some Bluegrass State Democrats had to run under different affiliations). We expect that to be the case for another decade.

One of the more obvious changes the new map made was in the 1st District. Historically a rural district based in the western part of the state, it extends a thin finger northward to take in the state capital, Frankfort — in fact, to get there, the district is just a single precinct wide at some points. Franklin County (Frankfort) is usually light red at the presidential level and blue in statewide races, but as it is not a very populous capital county (it has just over 50,000 residents), KY-1’s partisanship doesn’t budge much — it remains a Safe Republican seat. For Republican Rep. James Comer, this addition to KY-1 may, counterintuitively, be convenient: he has a home in Frankfort.

From a purely partisan standpoint, the Frankfort switch also works in Republicans’ favor. KY-6 is currently the least red of the state’s 5 Republican-held seats — Rep. Andy Barr flipped it in 2012, and Democrats seriously contested his seat in 2018. Though Barr held on by just over 3 points that year, he lost Franklin County by almost 10.

KY-6 is still a fundamentally similar seat to the outgoing version in that it is based around Fayette County (Lexington). Vis-à-vis the state, Fayette County has seen something of a contrarian trajectory in recent history: when Democrats dominated Kentucky politics, they would not run especially well there, and would often lose it. But in 2020, as Trump claimed 62% in Kentucky, Biden took 59% in Fayette County. The problem for Democrats is that Fayette County accounts for just 43% of the 6th District — the other 57% comes from 15 counties which, collectively, broke to Trump by a better than 2-to-1 ratio.

Elsewhere in Kentucky, though District 2 contains the cities of Bowling Green and Owensboro, it typically gives Republicans over 60%. KY-5, which contains much of the state’s section of Appalachia, has been a contender for the Trumpiest district in the nation — Biden was held under 20% in many of its counties. Though there are some positive longer-term trends for Democrats in KY-4 (the district is becoming more influenced by the suburbs of Cincinnati), it still gave Gov. Beshear just 45%.

Moving south, though Mississippi’s congressional redistricting was ultimately settled by the courts last decade, this time, the process seemed quite cut-and-dry. The 2nd District, which is Black-majority, has been losing population at a relatively rapid rate — going into redistricting, it needed to pick up nearly 66,000 residents. As a result, aside from a few miles up north, MS-2 now includes all of Mississippi’s western border.

MS-2 should continue to reelect Democratic Rep. Bennie Thompson, or most any other Democrat, without much of a fuss in general elections. The other 3 Republican-held seats all gave Trump more than 60% — if any of them are in jeopardy over the course of the next decade, Democrats are likely looking at tsunami-level gains across the country.

Staying the Deep South, a federal court ruled earlier this week that Alabama, which has one majority-Black district on its 7-seat map, must draw another district that gives Black voters an opportunity to elect a representative of their choice (mappers would not have to draw horrendously jagged lines in order to achieve such an outcome). Though the U.S. Supreme Court has yet to weigh in, the Alabama ruling may have implications for other states across the South, if it stands.

In some better news for Republicans, and as we anticipated, Tennessee Republicans are very close to finalizing a map that eliminates Rep. Jim Cooper’s (D, TN-5) Nashville-based seat. Cooper announced his retirement on Tuesday, and Republicans should have an easy time going from a 7-2 edge in that state to 8-1. Gov. Bill Lee (R-TN) is expected to sign the map — we will have more to say then.