With just under 4 months left until the midterm elections, the New York Times kicked off the week with a survey from Siena College showing President Biden in a perilous position. While only 33% of registered voters approved of his job performance, it is notable that the president’s approval rating with Democratic partisans is “only” at 70% — for context, according to Gallup’s tracking polls, throughout 2010 and 2014, 80% of Democrats, on average, gave President Obama positive marks. It is one thing for a sitting president to be struggling with independents (which is the case here), but it is potentially an even more ominous sign for Democrats that their voters seem to be cool on Biden.

The New York Times poll comes as some Democrats seem to be shopping around for other potential 2024 options. Though Govs. Gavin Newsom (D-CA) and JB Pritzker (D-IL) have said they’d back Biden for reelection, both have recently garnered attention as prospective presidential contenders down the line.

Could Biden be vulnerable in a primary? When asked, only about a quarter of Democrats would stick with Biden, while 64% went to “a different person.” But, if he runs for reelection, the nomination process will not solely be referendum on Biden — it will be a choice between him and whoever else steps forward. While the 1980 Democratic primary between then-President Jimmy Carter and the late Sen. Ted Kennedy may offer some parallels to Biden’s situation, NBC analyst Steve Kornacki points out that Biden is still in a considerably stronger position with his party compared to Carter back then.

Perhaps one encouraging sign out of the New York Times poll for Biden was that, even given his torpid standing with the electorate, he still may have the ability to accomplish what he was originally nominated to do: defeat Donald Trump. In a hypothetical general election matchup, he very narrowly led the now-former president 44%-41%. It is possible that voters’ perception of the economy may pick up by the time the 2024 cycle gets underway, which could strengthen Biden’s hand.

But, with 2024 still a far way off, we thought this would be a prime opportunity to look back at how President Biden’s approval rating has changed over the first year and a half of his presidency.

Using FiveThirtyEight’s aggregator, we tracked Biden’s approval rating on the 12th day of each month of his presidency since he took office (as yesterday was July 12, it just made for a logical interval). Table 2 shows FiveThirtyEight’s data. 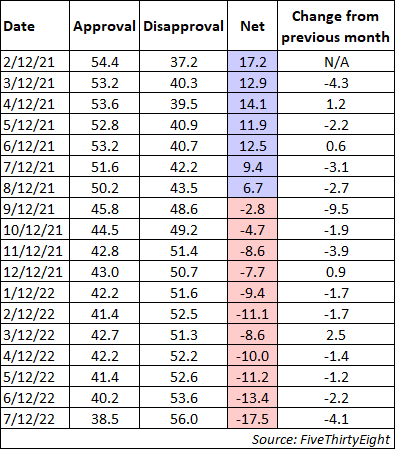 In February 2021, Biden had a +17.2 net approval rating. Conveniently, for the sake of comparison, his current -17.5 spread is almost a mirror image of that. If this roughly 35-point negative swing has been a painful trajectory for Democrats to watch, it has also been a relatively stable one. On average, his net approval rating has dropped 2.0 percentage points each month during his time in office, and the median monthly change over this timeframe is also about that (-1.9).

Out of all the days that FiveThirtyEight has posted data for, June 12 was the most recent day where Biden’s approval was above 40%, now a month ago at the time of this writing.

Though this midterm cycle is shaping up to be one very much centered on domestic issues — most notably, inflation is perhaps the top issue on voters’ minds — foreign events likely have contributed to some of the most obvious shifts in Biden’s standing.

Not surprisingly, the largest single-month drop in Biden’s approval spread came in September 2021, following the United States’ haphazard exit from Afghanistan as the nation’s U.S.-backed government collapsed. Biden’s net approval fell nearly 10 percentage points between mid-August and mid-September, and thus began his descent into negative territory — unfortunately for Democrats, that slump came right as Virginia voters seemed to be tuning into what became a marquee gubernatorial race. Conversely, Biden saw his most substantive — but still relatively meager — net approval rating increase in March of this year. There is evidence that this bump was due to his handling of Russia’s invasion of Ukraine.

Given the consistent downward trend in the president’s numbers, Democrats probably shouldn’t count on rapid positive movement, at least not in time for November. With that, in order to salvage their prospects in the midterms, Democrats will have to run markedly ahead of Biden’s approval rating. In some key races across the country, polling suggests that this is the case: in late June, Quinnipiac University showed Sen. Raphael Warnock (D-GA) taking 54% against Republican nominee Herschel Walker as Biden’s approval rating in Georgia was a rough 33/60 spread. While Quinnipiac’s findings seem undeniably rosy for Warnock compared to other polls, he is, at minimum, in better standing with the electorate than Biden. In Wisconsin, Marquette University Law School’s latest round of polling showed Gov. Tony Evers (D-WI) running several points head of his potential opponents, while the Senate contest continues to look competitive. Meanwhile, Biden was 17 points underwater in the state.

CNN’s Ron Brownstein wrote on Tuesday that Democrats may be able to sustain that dynamic nationally, but the forces of political gravity are strong. The president’s weak approval ratings in some marginal districts across the country have also enabled Republicans to expand the House playing field.

The marathon process of completing California’s vote tallies is now unofficially complete, with all counties now done counting and certification coming Friday. And while we might be tempted to say, what a long strange trip it’s been (hat tip to the Grateful Dead), the reality is that while the journey has been long, it hasn’t been very strange, given that this is how California has counted its votes for many years now.

There’s nothing nefarious about it, but it’s also a good thing that California is so uncompetitive at the statewide level — otherwise, the slow methodical count would leave the nation on edge. As it stands now, the long-delayed results leave only election-watchers on edge, as we wait to analyze the complete returns.

As we noted a few weeks ago, the California top-2 primary can provide something of a preview of the November campaign, in part because all candidates compete on the same ballot, with the top 2 advancing to the general election, as opposed to the separate primary ballots we see in nearly every other state. (Washington state, which votes in a few weeks, also has a top-2 primary system that can offer some suggestions about the fall.)

The general trend in California is that the vote gets bluer in the fall. In our analysis of the combined 2-party vote in California House races last decade, the Democratic share of the 2-party vote improved from the primary to the general, on average, by 6, 4, and 3 points in 2012, 2014, and 2018. The Republican share improved in 2016 and 2020 by about 2 points, on average, in each of those elections, but Democrats had competitive presidential primaries those years while Republicans did not.

There’s no presidential primary this year, which perhaps suggests we should expect Democrats to do better in the fall. However, we cannot just automatically assume that the Democratic share will improve in the competitive districts this fall. Perhaps California’s decision to mail ballots to all registered voters, a pandemic-era provision that the state made permanent last year, will disrupt the usual pattern of Republicans generally performing better in the primary than the general election. Or perhaps the political environment for Democrats will be worse in November than it was in June.

Before the primary, we rated 34 of California’s 52 districts as Safe Democratic, and we continue to do so. We also rate 5 as Safe Republican. That leaves 13 districts as something other than safe. Table 1 shows the 2-party results in each of these districts, in descending order from most to least Democratic. The table also shows, for comparison’s sake, Joe Biden’s share of the 2-party vote in each of these districts, as well as Gov. Gavin Newsom’s (D-CA) share in his 2018 election. Biden won the statewide 2-party vote by 30 points in 2020, while Newsom won by 24 — in our experience, the latter may be a better barometer for the actual partisanship of these districts (the presidential numbers may overstate how blue the state/districts actually are). 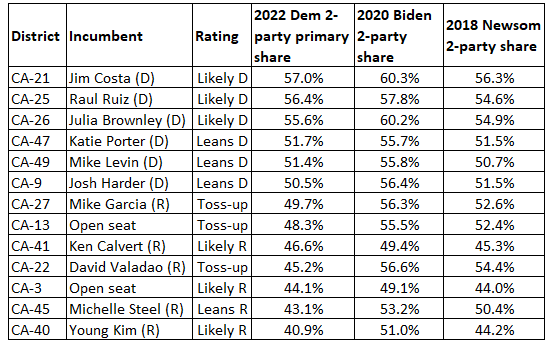 Source: California Secretary of State for 2022 results, Dave’s Redistricting App for 2018 and 2020 results

A few observations as we move down the table:

— While we’re keeping the districts that Democratic Reps. Jim Costa, Raul Ruiz, and Julia Brownley hold as Likely Democratic out of an abundance of caution, the collective 2-party share in their districts was over 55%, meaning that they should be fine in the fall.

— Democratic Reps. Katie Porter, Mike Levin, and Josh Harder all saw the Democratic share in their districts go over 50%, although it was very close in Harder’s district. While historical trends are made to be broken, this suggests all 3 should be at least narrowly favored. However, we’re moving Harder’s race in CA-9 from Likely Democratic to Leans Democratic, as it belongs among this more competitive group of districts.

— Rep. Mike Garcia (R) only barely held on against his Democratic challenger, former state Assemblywoman Christy Smith (D), in 2020 after beating her more soundly in a special election held earlier that year. The very divided 2-party vote in CA-27 suggests another barnburner, as the pair will face each other for the third time this fall. Compared to their last 2 bouts, the race between Garcia and Smith will take place in a somewhat bluer district, but the poor Democratic environment may effectively negate that partisan bump, at least for the 2022 cycle.

— CA-13, which has no incumbent running, saw Republicans narrowly outvote Democrats in the 2-party vote, 51.7-48.3%. State Assemblyman Adam Gray (D) will face businessman John Duarte (R). The Central Valley, where this district is located, often sees Democrats do better in the fall than in the primary, but the race seems initially competitive enough to move it from Leans Democratic to Toss-up.

— The same is true of CA-22, a seat further down the Central Valley where Rep. David Valadao (R) will face state Assemblyman Rudy Salas (D). The vote was roughly 55%-45% Republican, although in the previous iteration of this district, the old CA-21, Democrats sometimes did well enough going from the primary to the general to overcome such a gap. In 2018, Democrats reversed a nearly 26-point primary deficit to narrowly oust Valadao in the fall (though he came back in 2020). Low turnout is also a hallmark of this district, which can lead to those types of volatile results. With that, this is still a Toss-up.

— We moved CA-45, where Rep. Michelle Steel (R) faces community college trustee Jay Chen (D), from Toss-up to Leans Republican a few weeks ago, as we thought the 57%-43% Republican share represented a strong start to the general election campaign for Steel.

— The Republican share in CA-41, where Rep. Ken Calvert (R) is running, was a somewhat surprisingly low 53.5% in a narrowly Trump-won district. We’re keeping this district as Likely Republican but it may be a sleeper Democratic offensive target — likely more so than the other 2 California seats we also rate as Likely Republican, the open CA-3 as well as CA-40, which is being defended by Rep. Young Kim (R).

All told, we thought that the results were decent for Democrats, at least in the context of the otherwise daunting headwinds they face this cycle. In aggregate, Democrats outpaced Republicans by about 24 points in the gubernatorial primary, and 22 points in the Senate primary — this, broadly, tracks with what Newsom got in the 2018 general election (the 2021 recall against him failed by a similar margin). While we did end up moving 3 race ratings toward the Republicans as a result of the primary, we were curious to see if there were eye-poppingly strong Republican results in some of these districts that might cause us to broadly downgrade more Democratic seats. That did not come to pass, in our view, as Democrats finished under 50% in the 2-party vote in only one of the seats that they are effectively defending (CA-13) under the new map.

Our overall and oft-stated House assessment — Republicans are strongly favored to flip the chamber — remains unchanged.