We’d say the first primary of 2022, in Texas, is now in the books, but that’s not actually the case. Votes are still being counted, and Texas also has a primary runoff system that requires winning candidates to receive a majority of the vote in order to win outright. A number of key races were easily decided. Though Gov. Greg Abbott (R-TX) had a few primary challengers, we noted last year that he would be hard to defeat — he carried every county last night. On the Democratic side, 2018 Senate nominee Beto O’Rourke (D) won the gubernatorial nomination with over 90% of the vote. But many others will be going to runoffs, which won’t be held until May 24.

That includes the race for the Republican nomination for attorney general, where embattled and Donald Trump-backed incumbent Ken Paxton (R) will face state Land Commissioner George P. Bush (R), son of former Florida Gov. Jeb Bush; several Democratic statewide contests; and a number of important congressional primaries, most notably in South Texas. One of those is in TX-28, where longtime incumbent Henry Cuellar (D), arguably the least liberal member of the Democrats’ House caucus, is facing a runoff with Jessica Cisneros (D), a progressive who held Cuellar to a narrow victory in the 2020 primary. As of the most recent results, Cuellar was leading Cisneros by a couple of points but was short of 50%, and the Associated Press has projected a runoff. The Republican primary is also going to a runoff.

This is a difficult district to handicap. Joe Biden carried it 53%-46%, so not that much better than his overall national vote in 2020. Cuellar, however, is a proven local commodity, but he has a cloud hanging over his head — his home was raided by the FBI a month ago, though he claims no wrongdoing. Cisneros, meanwhile, may very well be too progressive for an ancestrally Democratic but not particularly liberal area. Looming over all of this is a Republican trend among Latino voters that manifested itself in South Texas in 2020: Biden’s showing was way down from nearly 20-point victories in the district by Hillary Clinton in 2016 and O’Rourke in his 2018 Senate campaign, per figures from Dave’s Redistricting App.

One potential upside of the runoff is that voters may get more information, positive or negative, about whether Cuellar is actually in serious legal trouble, although such investigations can take quite a long time to develop.

We’re going to go ahead and move this race from Leans Democratic to Toss-up, because we believe the GOP trend in this region is real; because the Democratic runoff is likely to be nasty; and because the overall political environment looks good for Republicans.

Last week, we noted that we were watching several typically Democratic counties to see if there were any notable trends in primary turnout. These counties typically have hardly any Republican participation in primaries. These counties continued to be overwhelmingly Democratic in terms of primary participation. However, there definitely was noticeable slippage in several counties compared to the 2014-2020 average, with a few dipping into the mid-70s for Democrats. That said, many of the >90% Democratic counties that we highlighted last week stayed there. 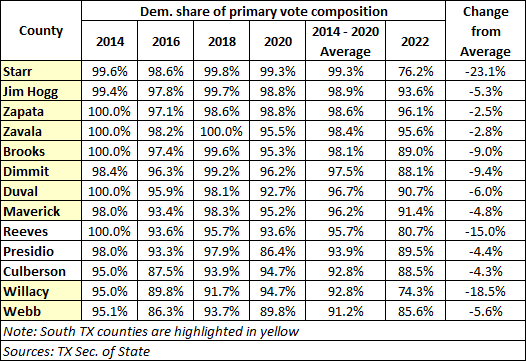 Elsewhere in the state, and though the district will be Safe Republican regardless, 2-term Rep. Van Taylor (R, TX-3) was (barely) forced into a runoff against former Collin County Judge Keith Self. Taylor was criticized from his right during the campaign. There is also some evidence that he was hurt by an unfavorable story that broke shortly before the election: in Collin County, which makes up the bulk of the district, he took 52% of the early and mail-in vote, but dropped to 44% on Election Day.

Overall statewide, and with not every single vote counted, about 1.9 million votes were cast in the Republican gubernatorial primary and about 1 million were cast in the Democratic gubernatorial primary, or a 65%-35% Republican split. Four years ago, in 2018, the statewide split was about 60%-40% Republican, with almost the exact same number of Democratic votes cast compared to this year but with roughly 350,000 fewer Republican votes. In other words, in 2022, Democratic participation held constant while Republican participation jumped quite a bit. It is fair to note that there was probably more statewide excitement on the Republican side, given the heated AG primary, as well as some other races. This is part of the reason why using primary participation alone as an indicator for November results is not something we’d suggest doing, but we would say that the improved Republican share of the vote compared to 4 years ago does line up with several other national indicators suggesting an engaged Republican electorate.

The state of the midterm

President Joe Biden gave his first official State of the Union address last night. While it is hard for any speech to change public opinion, the State of the Union remains one of the big political events on the calendar — arguably the biggest regularly-scheduled one of the year, other than election nights. Tens of millions tune in for these addresses, still impressive in an era with a splintered media environment and an overflowing trove of content options for Americans. The speech presented Biden with an opportunity to try to improve perceptions of his presidency; we’ll see if it has any effect.

Biden gave his speech as his approval rating continues to stagnate. His approval rating in the 2 major polling averages, FiveThirtyEight and RealClearPolitics, was at about 41% in each as of Tuesday afternoon with disapproval at around 54%. There’s been scant sign of a rally-around-the-flag effect from the ongoing Russian invasion of Ukraine, at least in terms of Biden’s approval, although that could change.

Republicans also more often than not lead House generic ballot polling, the national surveys that ask respondents either which party they plan on supporting in the next election or which party they want to control Congress. Over the weekend, the ABC News/Washington Post poll showed Republicans up 49%-42% on the generic ballot among registered voters; other polls have generally showed smaller Republican leads, with Democrats retaining leads in 2 regularly-conducted online surveys, Politico/Morning Consult and Economist/YouGov. Although even in those 2 surveys, Democrats lead but only register about 45% support or less. With Biden’s approval rating so low, one would expect Republicans to have an easier time winning undecideds later in the cycle. Overall, Republicans lead in the averages of generic ballot polls by between 2 (FiveThirtyEight) to 3 (RealClearPolitics) points.

Table 3 shows the results of the last half-century or so of midterm elections, along with the president’s average approval rating around the time of the election. This table also shows the adjusted 2-party popular vote for House in all of those midterms. We say “adjusted” because this calculation accounts for uncontested seats, which can sometimes skew the numbers one way or the other — these figures are from our friend and occasional Crystal Ball contributor Theodore S. Arrington, an emeritus political science professor at the University of North Carolina at Charlotte (if you’re curious as to how Arrington accounts for uncontested seats, see his previous pieces for the Crystal Ball). 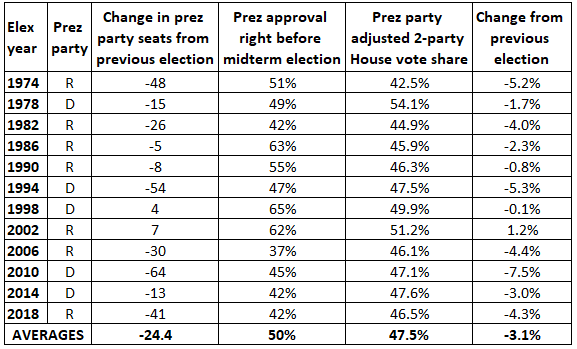 Note, also, that even popular presidents typically see their party lose the adjusted House popular vote, like Ronald Reagan in 1986 and Bill Clinton in 1998 (the latter’s party actually gained seats in the midterm, 1 of just 2 times since World War II that has happened). The president’s party also almost always loses ground in the adjusted 2-party vote share from the previous election (the presidential election year). The only exception was George W. Bush and the Republicans in 2002, a midterm in which Bush was over 60% approval and where Republicans benefited, on balance, from decennial redistricting/reapportionment. Even then, Republicans gained just an extra point from their performance in the bitterly-contested 2000 election.

On average, the president’s party lost about 3% of its previous House vote share over the course of the last 12 midterms (that’s 6 points in terms of margin). Democrats won just 51% of the adjusted 2-party House vote in 2020, and Biden is unpopular. Even though redistricting, on balance, appears to have turned out better for Democrats than many expected, the history and the environment suggest that the Republicans are much likelier than the Democrats to win the national House vote in November, which would almost assuredly translate into a House majority.

Sen. Jim Inhofe (R-OK), who was just reelected in 2020, announced late last week that he would be resigning at the end of the year. In Oklahoma, state law allows a senator to announce an intent to resign and trigger a special election for the remainder of that senator’s term. The late Sen. Tom Coburn (R-OK) did the same thing a few cycles ago, which set up Sen. Jim Lankford’s (R-OK) initial election in 2014.

That sets up what we like to call a “double-barrel” Senate election in Oklahoma –2 Senate elections held on the same day. Our old colleague Geoffrey Skelley wrote a history of such contests several years ago for the Crystal Ball. Since he wrote that piece, we had perhaps the most impactful and dramatic set of double-barrel Senate races ever — the 2020 Georgia elections, when Democrats narrowly flipped both seats in an early 2021 runoff, giving them control of the U.S. Senate at the dawn of Joe Biden’s presidency.

The double-barrel Senate elections are often won by the same party. The last time 2 Senate races decided on the same day were won by candidates from different parties was way back in 1966, when South Carolina reelected Sen. Strom Thurmond (R-SC) while Ernest “Fritz” Hollings (D-SC) won the first of several terms in the concurrently-scheduled special election.

There’s no threat of Oklahoma breaking the longstanding trend of a single party sweeping both barrels of a double barrel Senate election — we rate both races as Safe Republican. Oklahoma is one of the most Republican states in the country, and Democrats have not won a Senate election there since 1990, when then-Sen. David Boren (D-OK) won his final term. Since then, Democrats have not even got within a single-digit margin in any Oklahoma Senate race.