With the congressional primary season schedule already poised to start heating up in May, 2 new elections will soon be added to the calendar.

Towards the end of last week, a couple of members of Congress, from both sides of the aisle, announced plans to leave office early. Before that, there were already 3 vacancies in the House, all of which came in Republican-held seats: AK-AL and MN-1 became open seats with the recent deaths of their incumbents, while CA-22 opened up with former Rep. Devin Nunes’s departure on Jan. 1.

In Nebraska, Rep. Jeff Fortenberry (R, NE-1), who was indicted in October of last year, was convicted by a federal court on Thursday — he was charged with lying to federal investigators, in an attempt to cover up an illegal campaign contribution. Fortenberry was first elected to Congress in 2004 and is the longest serving member of Nebraska’s current delegation.

As a result of his conviction, Fortenberry submitted a resignation letter that will be effective on Thursday — after that, a special election must be held within 90 days. From an administrative standpoint, the timing of Fortenberry’s resignation was less than ideal: He was a candidate for the regular May 10 primary, and his name has already been printed on the ballots. Still, as it was, he was not guaranteed renomination (more on that later), so the ballot design may not ultimately matter too much.

Nebraska’s 1st District includes the state capital, Lincoln. In fact, Lincoln’s Lancaster County accounts for roughly half the district’s population. NE-1 also takes in all or parts of 16 other counties — many of them are more rural, and, geographically, the district forms a semi-circle around the Omaha area. NE-1 is also the state’s median district: while it is not as friendly to Democrats as the Omaha-based NE-2, a Trump-to-Biden seat, Republicans don’t get the types of crushing 3-to-1 margins there that they do in the expansive NE-3, which covers most of the state’s geography.

In 2020, the current NE-3 would have given Trump a 15-point margin. As a result of redistricting, NE-1 contracted, and Trump’s margin dropped to 11 points, but the special election will be held under the current configuration.

Nominees for the special election, which seems likely to take place in June, will be selected by the executive committees of the state parties. The leading Republican prospect is state Sen. Mike Flood, who previously served as Speaker of the Legislature and was briefly a candidate for governor in 2014. Flood was already running in the primary against Fortenberry in the regular election.

In a double-digit Trump seat, Democrats would start out as obvious underdogs to Flood, or essentially any other Republican. Though we’ll see where things stand after the party selections, we’re starting the NE-1 special election off as Safe Republican.

Last week’s other resignation announcement, on the Democratic side, came in the Lone Star State. In South Texas — a region that we have written much about this cycle — Rep. Filemon Vela (D, TX-34) announced almost exactly a year ago that he would be forgoing reelection. However, he will now be departing Congress early to take a job at a law firm.

As it was, there was something of a game of musical chairs going on in South Texas: with Vela’s retirement, fellow Democratic Rep. Vicente Gonzalez, who holds the next door TX-15, was drawn into Vela’s open 34th, and is seeking reelection there.

While the existing TX-15 and TX-34 both supported Biden by narrow margins, Republican mappers turned TX-15 into a Trump seat but made TX-34 more Democratic. Biden’s share in TX-34 jumped from 52% to 57% — so the new TX-34 is bluer, but still not entirely out of reach for the GOP. Map 1 shows how the districts were reconfigured in different directions. 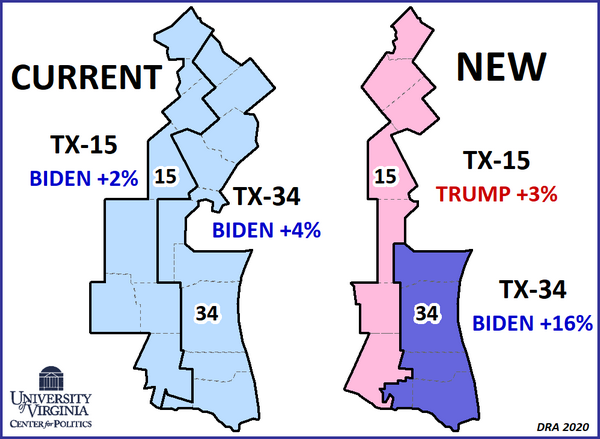 Although Gov. Greg Abbott (R-TX) has not set the exact dates for the special election, it is good news for Republicans that the race will take place under the current (and more marginal) configuration of the district. Meanwhile, Gonzalez, who is already representing TX-15, will not be a candidate for the special election — he won the Democratic nomination for the regular November general election in TX-34.

From a practical standpoint, with Gonzalez as their nominee in November, Democrats may not have much reason to contest a special election in TX-34: even if they held it, their member would only serve for a matter of months — this is a truly unusual situation.

On the Republican side, Mayra Flores, a first-time candidate, took 60% earlier this month in the primary for the TX-34 regular election. As the new district is similar to the outgoing district, Flores would seem well-positioned to claim the lion’s share of the Republican vote in a special election.

Texas, as Crystal Ball readers saw during last year’s situation in the suburban Dallas 6th District, uses Louisiana-style jungle primaries for special elections. So all candidates will run on the same initial ballot — if no one claims a majority, a runoff will ensue.

The jungle primary format can sometimes incentivize parties to consolidate behind a single candidate. If Democratic opposition is weak, and Republicans can unify behind Flores, it is not hard to see her winning a special outright — especially in a district as evenly-divided as the current TX-34. Flores would then run for the new TX-34 as an incumbent, although Gonzalez, who was drawn into the district but currently represents another, could also claim incumbency (again, this is an unusual scenario).

While we’re holding our rating for the regular TX-34 election at Likely Democratic, we would start a special election as Leans Republican. Simply put, Republicans would face a friendlier electorate in the current district, and Democrats may not be motivated to put up too much of a fight.

In addition to being handed a prime pick-up opportunity in South Texas, Republicans also got a bit of good news in Maryland, although it came on the redistricting front.

On Friday, a judge sided with plaintiffs who were challenging the state’s recently-enacted congressional map. Fair Maps Maryland, a group with links to Gov. Larry Hogan (R-MD), and Judicial Watch, a conservative group, argued that the map was a partisan Democratic gerrymander.

Since 2012, Democrats have held 7 of Maryland’s 8 districts, with the sole Republican in the state’s delegation being Rep. Andy Harris (R, MD-1). Though Democrats passed a map — over Hogan’s veto — that turned Harris’s solid red Eastern Shore-based seat into a Biden district, we still considered Harris a favorite for reelection. Though Harris’s new district would have supported Biden by about half a percentage point, it went for Trump by 8 points in 2016 — we considered the latter to be a better indicator of its partisanship, and had Harris’s race as Leans Republican for 2022.

Still, under the plan that was just scrapped, Republicans could have very feasibly been shut out of the delegation in a good Democratic year. The plaintiffs seemed to successfully argue that Maryland is blue, but perhaps not that blue.

Democratic state Attorney General Brian Frosh could elect to appeal the ruling to the state Court of Appeals (Maryland’s highest court), but the court is dominated by Hogan appointees. So in other words, Frosh may not find a very sympathetic audience.

On Monday night, legislative Democrats released a new plan. Though Democrats would still be favored in 7 districts, the map is not quite as lopsided as the one that was struck down. Map 2, courtesy of @JimNPol, considers the 2016 and 2020 presidential vote in the new proposal. 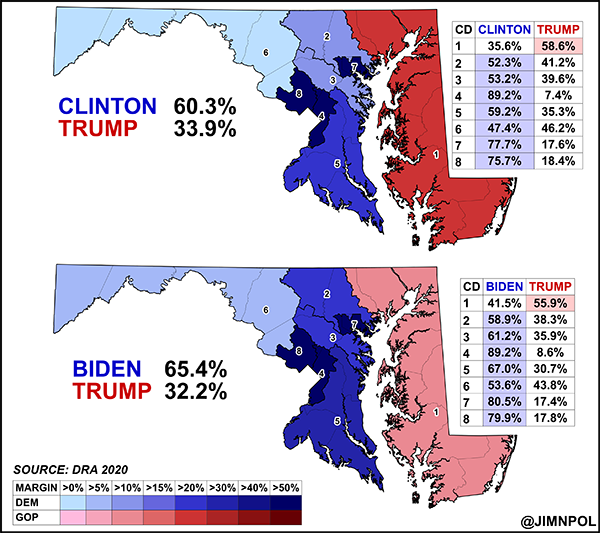 Under this plan, MD-1 would stand very little chance of falling into Democratic hands (although we are holding off on issuing formal ratings until this, or another map, is enacted). Trump would have carried the district with 56%, giving Harris plenty of breathing room.

Perhaps the most important change on the map, though, is on the other extreme of the state. In 2012, Democrats redrew western Maryland’s 6th District (then GOP-held) so that it would be more amenable to them. They flipped it that year, and have held it since. Compared to the current plan, this MD-6 relinquishes some of Montgomery County (a fountain of Democratic votes) and takes in all of Frederick County, which is a blue-trending county but is still marginal.

As a result of the changes in MD-6, Biden’s margin is more than halved, going from 60%-37% to 54%-44%. In fact, in 2016, Hillary Clinton would have only carried the proposed MD-6 by just over a percentage point. This would be a Republican pickup opportunity, although Rep. David Trone (D, MD-6) has the luxury of being able to self-fund. Republicans surely would prefer a return to the pre-2010s status quo, where Maryland featured 2 clearly Republican-leaning districts: MD-1 on the Eastern Shore and the old version of MD-6 covering the panhandle; indeed, this kind of map was proposed by a redistricting commission created by Hogan.

Overall, at a visual level, this latest proposed map from Democrats is much cleaner than what it would replace — it is easily the cleanest Maryland map we’ve seen for a few decades.

The other 6 districts should elect Democrats, although some of the lines were not tailored to the liking of all incumbents. Rep. John Sarbanes’s MD-3, for example, is now based in Howard and Ann Arundel counties — though he has represented those areas before, his home, in Towson, is outside the district. Over the past few rounds of redistricting, legislators seemed to take specific incumbent preferences to heart. That does not seem to be the case this time — in another example, Rep. Dutch Ruppersberger (D, MD-2) said he was not consulted during the drafting of this proposed plan.

Assuming this proposal passes the legislature, Hogan could still veto it — and even if Democrats override him (again), more litigation is possible.

While a battle over the state’s legislative districts continues, the Ohio Supreme Court set a schedule for handling challenges to the state’s congressional map that appears to push the action past the state’s currently scheduled May 3 primary. Cleveland.com’s Andrew Tobias and Jeremy Pelzer wrote on Tuesday that the court’s move “has largely closed the door on Democrats’ attempts to block Republicans’ latest congressional redistricting map from taking effect in 2022.” It is possible that a federal court could intervene, but barring such intervention, the map gives Republicans 10 safe seats, Democrats 2 safe seats, and has 3 districts that could go either way in the context of 2022 — meaning that this map could allow Republicans to achieve their goal of a big 13-2 edge in Ohio. We plan to take a closer look at the map and issue ratings soon — again, assuming there is no further court intervention.