The last few months have not been especially kind to Gov. Kathy Hochul (D-NY). Shortly after she was elevated to replace her predecessor, now-former Gov. Andrew Cuomo (D), last year, she appointed then-state Sen. Brian Benjamin to her old post as lieutenant governor. The pairing seemed like it could be formidable: Hochul is from Buffalo and seems firmly within the mainstream of her party, while Benjamin, who was set to be her running mate, is a Black progressive from New York City.

As it turned out, though, Benjamin entered the lieutenant governor’s office with some ethical baggage. Last month, he resigned after a 5-count indictment alleging that he essentially traded public money for campaign contributions.

Another recent setback for Hochul was that, on April 27, the Democratic gerrymander of the state’s congressional map — which she signed off on — was thrown out by the New York Court of Appeals (the state’s highest court). The now-void plan insulated the state’s more vulnerable Democratic members and imperiled several Republican-held seats, with the goal of a 22-4 Democratic delegation, up from the 19-8 split that the 2020 election produced.

The most inconvenient aspect of the high court’s ruling for Democrats is that the legislature (which they hold) will not get another bite at the (big?) apple: a special master, not legislators, will draw the lines. The special master should release a plan by the end of the month. Until then, it will be hard to tell what the new map will look like, but it will almost certainly feature more than just 4 Donald Trump-won seats.

In something of a last-ditch effort to save their gerrymander for 2022’s elections, Democrats argued that with June 28 (the original date of the state’s congressional primaries) fast approaching, there wouldn’t be enough time to conduct a primary under new lines. But on Tuesday, Democrats were dealt another blow, as the congressional primaries were pushed back to late August by a federal judge.

Rep. Antonio Delgado (D, NY-19), who was already an electoral overperformer, was one of the Democrats aided by the now-defunct gerrymander. In the 2020 election, Delgado’s Hudson Valley-area district was the most marginal in the state, going for Joe Biden by less than 2 points. He was slated to get a district that favored Biden by a more comfortable 54%-44% margin.

Though we’ll know for sure later this month, it seems unlikely that the special master would draw the 19th to be a Biden +10 seat. If the district is kept similar to its current form, Delgado, or any other Democrat, would be in for a challenging race. Even before the new lines were struck down, Republicans had a serious candidate in Dutchess County Executive Marc Molinaro, who was also their 2018 gubernatorial nominee — though he lost to Cuomo, he carried the current NY-19 by 11 points.

So while Hochul was in the market for a new running mate, Delgado faced the prospect of a tougher-than expected congressional race. With that, Delgado announced last week that he accepted Hochul’s offer to be the state’s new lieutenant governor — he should be sworn in by the end of the month. Though Delgado will have to win the Democratic nomination for the office, he seems likely to join Hochul on the general election ticket. Just getting on the ballot was challenging and controversial, as lawmakers had to change state law in order to allow for Benjamin to leave the race and for Delgado to join it.

While he has not yet resigned from Congress, Delgado’s imminent resignation will trigger a special election for his purple seat. Even if the special master makes drastic changes to the district, a special election will be held under the seat’s current configuration.

In a NY-19 special election, Molinaro, who seems poised to run, would have something of a head start — his campaign already has over $700,000 in the bank. Though Democrats have several prospective candidates — one is Ulster County Executive Pat Ryan, who finished second behind Delgado in the 2018 primary for the seat — we’d be inclined to start the race at Leans Republican.

Coincidentally, another congressional vacancy popped up in the Empire State this week. Rep. Tom Reed (R, NY-23) announced last year that he’d forgo reelection, in the wake of some sexual misconduct allegations, but he said yesterday that he’d leave early. Reed’s Southern Tier district includes the college town of Ithaca (Cornell University) but is otherwise strongly Republican turf. As with NY-19, a special election would be held under the current configuration, and we’d call this seat Safe Republican.

It appears that both special elections will be held later this summer, according to Politico.

As the “May Madness” season rages on, a banner primary came this week in West Virginia. Because of the 2020 census, the Mountain State’s House delegation was set to drop from 3 members down to 2. As Republicans currently hold all 3 seats, the loss would have to come from their column — this set up last night’s member-vs-member primary.

As expected, Rep. Alex Mooney’s (R, WV-2) district, which runs the entire width of the state, was essentially split in half. Mooney himself is from the Eastern Panhandle, which wound up in a district that came mostly from Rep. David McKinley’s (R, WV-1) former turf. Though this new northern West Virginia seat is essentially the successor to McKinley’s WV-1, in a confusing twist, the legislature renumbered the seat as WV-2.

Three decades ago, northern West Virginia was the scene of another member-vs-member primary, except on the Democratic side. As the state downsized from 4 seats to 3, Reps. Alan Mollohan and Harley Staggers were drawn into a seat that favored the former. The primary was highly regionalized: although Staggers took at least 67% in each of the counties he represented, Mollohan won by 23 points, as more of the district was familiar to him.

With Mooney’s somewhat shaky connections to the state — he was a state legislator in Maryland but moved to West Virginia shortly before running for Congress in 2014 — and his territorial disadvantage, he initially seemed like the underdog. But as the race eventually took on a more nationalized character, it seemed to break more along ideological than geographic lines.

Although McKinley was a party-line vote on most issues, he would occasionally show an independent streak — in his first term, he voted against then-House Budget Committee Chairman Paul Ryan’s (R, WI-1) plan. More recently, he was among the 13 House Republicans who supported Biden’s infrastructure spending package. Shortly after that vote, former President Trump endorsed Mooney, who is also a member of the right-wing House Freedom Caucus.

As Map 1 shows, the Trump endorsement helped Mooney overcome his geographic disadvantage: he won by a wide 54%-36% margin, carrying all but 3 of 27 counties. 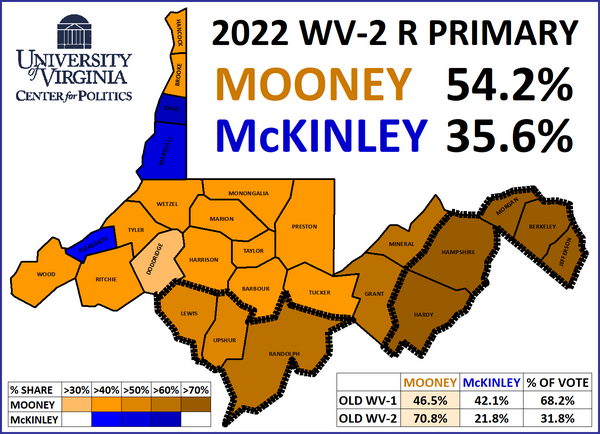 Though the overall result was quite lopsided, some geographic patterns are evident. Eight counties, along the district’s eastern border and with a thicker outline, came from Mooney’s old district. Mooney carried that group, collectively, by an almost 50-point margin. Before his time in Congress, McKinley served several terms in the state legislature representing a Wheeling-based district within Ohio County. McKinley took over 60% in his home county, but lost the area that came from his old WV-1 by about 4 points.

During his victory speech, Mooney took aim at Sen. Joe Manchin (D-WV), whose Senate seat comes up in 2024 — in a rare cross-party move, Manchin, who is from the district, endorsed McKinley. While we’ll have to wait 2 years to see how that contest will shake out, Mooney is a safe bet for reelection.

Mooney’s commanding win may bode well for Rep. Mary Miller (R, IL-15), who is running in another member-vs-member primary, in Downstate Illinois. Miller, one of the most conservative members in the House, is Trump’s candidate, and she is facing Rep. Rodney Davis (R, IL-13), who is considered a more mainstream Republican. The Illinois primary is June 28.

In Nebraska, the most visible primary of the night was the race for the GOP gubernatorial nomination. Last year, Trump endorsed businessman Charles Herbster — as the Trump administration was beginning to take shape, after the 2016 election, Herbster was mentioned as a potential Secretary of Agriculture. In the closing stretch of the campaign, though, Herbster’s prospects faded, as multiple women accused him of sexual misconduct.

Though the Republican field featured 9 candidates, Herbster’s main opposition came from state Sen. Brett Lindstrom and university regent Jim Pillen — both of whom, interestingly, played football for the University of Nebraska before getting into politics. Lindstrom’s support came from moderates: The late Rep. Brad Ashford, who served in Congress as a Democrat but was a former Republican, endorsed him. Pillen, meanwhile, had the support of current Gov. Pete Ricketts (R-NE).

Lindstrom carried the Omaha-based 2nd District with a 38% plurality, but he finished a distant third in the 3rd District. NE-3 is made up of 80 (mostly rural) counties and acts as a Republican vote bank in general elections. In fact, despite making up 1/3 of the state’s total population, NE-3 cast close to half the ballots in the Republican primary (Map 2). 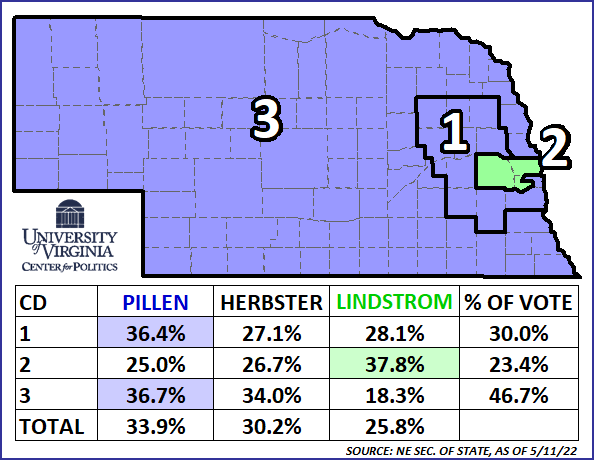 Herbster placed second in the Omaha area, but Pillen cobbled together the most balanced coalition: he carried District 1, which houses the state capital of Lincoln, with 36% and got a similar plurality in District 3.

This was all enough for Pillen to claim victory with 34%, while Herbster took just over 30%, and Lindstrom earned 26%. Democrats have a serious candidate in state Sen. Carol Blood, but we are holding our rating at Safe Republican. Had Republicans nominated Herbster, we would be less confident about their chances.

Towards the end of March, we covered the situation in the 1st District, which is seeing both a regular and a special election this year, due to the departure of former Republican Rep. Jeff Fortenberry. Mike Flood, who served as Speaker of the Nebraska Legislature from 2007 to 2013, easily captured the GOP nomination for the regular election (he is already the party’s nominee for the June 28 special election).

Meanwhile, Rep. Don Bacon (R, NE-2) was renominated with close to 80% in his Trump-to-Biden district. He will advance to the general election with state Sen. Tony Vargas (D). We rate the 2nd District as Leans Republican.