TX-6: Democrats locked out of runoff

In the Dallas area this weekend, a somewhat unexpected — but not entirely surprising — result will induce a Crystal Ball ratings change.

On Saturday, Texans in the state’s 6th District went to the polls to decide who should replace the late Rep. Ron Wright (R, TX-6). Sadly, Wright died of COVID-19 in February. On paper, TX-6 had potential to be a competitive district — Trump carried it 51%-48% last year, which was considerably closer than his 12-point margin there in 2016. About 70% of the district’s votes typically come from a blue-trending portion of Fort Worth’s Tarrant County, while the rest is from two much redder counties to the south.

In Texas, though, special elections are held under Louisiana-style jungle primary rules: all candidates, regardless of party, appear on the same ballot and a runoff is triggered if no one clears 50% — this turned out to be key.

In a field that featured nearly two-dozen contenders, Democrats didn’t consolidate behind a single candidate, while Susan Wright, the late congressman’s widow, emerged as something of a frontrunner. Another Republican, Jake Ellzey, a state legislator with a base in exurban Ellis County, also fared well on Saturday. As a result, Wright took first place, with 19.2%, while Ellzey placed second, with 13.9% (a Democrat finished third, about 350 votes behind Ellzey). So a runoff — which Gov. Greg Abbott (R-TX) has yet to set a date for — will feature two Republicans.

Though former President Donald Trump has been out of office for months, he weighed in on this race — and in a very typical style. Even as last year’s NV-3 Republican nominee, Dan Rodimer, carpetbagged to the district and claimed Trump’s support, Trump got behind Wright late in the game. In the final stretch of the primary, Wright appeared increasingly favored for a runoff spot regardless. The former president likes to support winners, after all. Rodimer finished with less than 3% of the vote.

There was evidence the Trump endorsement helped Wright on Election Day: she netted roughly 4,000 votes over Ellzey with voters who cast ballots the day of, while the two were about tied in the early vote.

For its part, the Democratic Congressional Campaign Committee steered clear of the race. Perhaps the DCCC was trying to avert a situation like the 2017 special election in Georgia’s 6th District, where they suffered a close, but stinging, loss in a seat that had narrowly supported Trump the previous year.

The looming redistricting process may have also impacted the DCCC’s calculus. With Republicans drawing the lines, TX-6 seems likely to get redder, and it could have been hard for Democrats to hold further down the line. Redistricting expectations have occasionally factored into special election results.

In 2011, when Nevada’s Reno-based 2nd District became open, Democrats landed a quality candidate in Kate Marshall — now the state’s lieutenant governor, she was then its treasurer. But with the state set to gain another district after the 2010 census, it was expected that Democrats would pick up that new seat the next cycle anyway. The version of NV-2 in place at the time had very narrowly voted for McCain in 2008, and to this day, the district has only elected Republicans — so even with Marshall, Democrats’ long-term prospects there were not especially promising. So as the DCCC largely passed on that race, state analyst Jon Ralston joked that Democrats would win the race only “When Jupiter aligns with Mars…” In the end, Marshall lost by over 20% to now-Rep. Mark Amodei (R, NV-2).

Still, whether it was strategic or not, getting shut out of the TX-6 runoff didn’t exactly project Democratic strength, nor did the lopsided 62%-37% Republican edge in the aggregate vote. This is just one special election, but it was definitely a better showing for Republicans than Democrats.

Looking to the runoff, the result could break down much like the 2018 Republican runoff: Ellzey racked up majorities in the district’s two exurban counties, but Tarrant County delivered for Ron Wright, who won 52%-48% overall. Either way, this seat is obviously moving from Likely Republican to Safe Republican in our Crystal Ball ratings.

In perhaps the first truly surprising House retirement of the 2022 cycle, Rep. Cheri Bustos (D, IL-17) announced on Friday that she wouldn’t seek reelection. Bustos was first elected in 2012, in a district that has been anchored in the Quad Cities area of western Illinois for the past several decades.

In Congress, Bustos aimed to bring a Heartland perspective to her caucus. For much of her tenure, she was thought to be Sen. Dick Durbin’s (D-IL) heir apparent (years ago, she babysat his children). But Durbin was just reelected, so it seems he won’t be going anywhere for at least another six years.

For the 2020 cycle, she was tapped to head the DCCC’s efforts. Bustos’ time leading the organization proved rocky, though: in 2019, she faced criticism for its lack of diversity, and while the Democrats were favored to expand their majority in last year’s elections, they instead suffered a net loss of more than a dozen seats.

On one hand, her strength with rural voters made her insights valuable to both Democratic leadership and other candidates; she won her first three reelection campaigns by double-digits in an Obama-to-Trump district. Still, 2020’s result in IL-17 may deter parties from elevating members in marginal districts to leadership positions. As IL-17 stuck with Trump by just over one percentage point last year, Bustos was reelected by a smaller-than-expected 52%-48% — given her role in House Democrats’ national operations, a loss would’ve been especially embarrassing.

While Bustos’ retirement would ordinarily signal a prime Republican pickup opportunity, Democrats will be drawing the new lines in Illinois, so it’s possible something comparable to the current district won’t exist for 2022. Indeed, Democrats could dismantle it to strengthen their prospects in other seats. IL-17’s current holdings in Democratic-leaning Rockford, for instance, could be transferred to Rep. Lauren Underwood (D, IL-14), who had a close reelection race last year. So it’s hard to know the overall impact of Bustos’ retirement, although the departure of senior members can often be a telling and negative sign for a party’s prospects heading into the next election.

There’s a fair chance that the Quad Cities area, which spans Illinois and Iowa, and is the historic heart of the district, could be left with exclusively Republican representation for the first time since the early 1980s. In fact, the Driftless Area — a region which cuts across southern Minnesota, eastern Iowa, western Wisconsin, and northwestern Illinois — may soon be represented mostly by Republicans. The Crystal Ball discussed the region’s trends in our post-election look at Wisconsin. Map 1 shows some recent congressional elections in states that the Driftless Area includes. 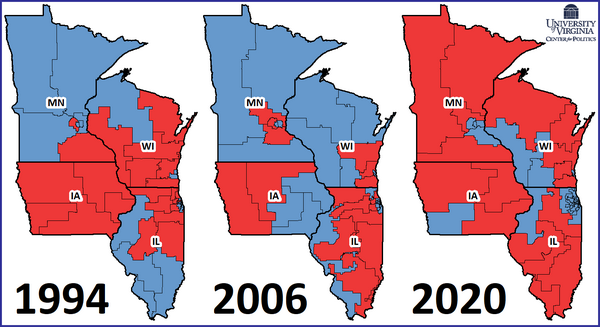 The border region between the four states has sometimes been susceptible to national waves. After the 1994 Republican Revolution, Rep. Lane Evans (D, IL-17) was the sole Democrat to hold a seat there. But after the anti-Bush 2006 wave, Democrats held nearly all the districts along the border.

As the area lacks the Democratic heritage of northern Minnesota or southern Illinois — until recently, organized labor helped keep these extraction-based areas blue — successful Democratic candidates in the border region often had to be quality retail politicians with an ear to local issues. This was the case with Evans: He was first elected in 1982, when Reagan’s standing in the area dipped as the farm economy suffered, and he won several tough reelection bouts, in part, by looking after the Rock Island Arsenal, a major job provider in the district. Bustos and Rep. Ron Kind (D, WI-3) have used a similar playbook. But Bustos is retiring and Kind’s future is uncertain — after a close call last year, he could get a tougher seat, or run statewide.

Depending on how Democrats redraw the lines, Bustos’ retirement may not necessarily cost them a seat, but the broader regional trends illustrate how Democrats have become increasingly dependent on other areas of the state.

Are we polarized yet?

Crystal Ball Senior Columnist Alan Abramowitz passes along this striking figure, which he created through the 2020 American National Election Study (Figure 1). It shows those who voted for Joe Biden (blue) and those who voted for Donald Trump (red), sorted by ideology. Abramowitz used several traits measured in the ANES — liberal/conservative ID, social welfare ideology, cultural ideology, immigration, and racial justice — to create a liberal versus conservative scale. The greater the negative number, the more liberal a respondent was, and the more positive a number, the more conservative a respondent was.

Figure 1: Vote choice by ideology in the 2020 presidential election 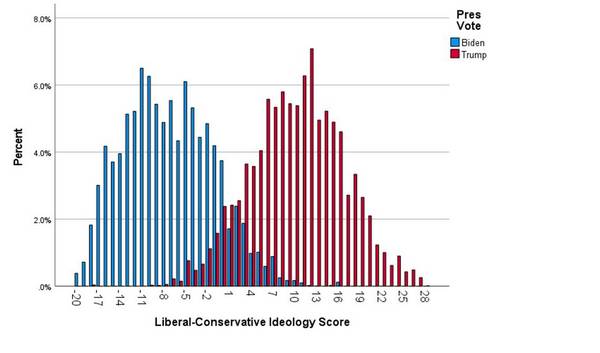 Note that effectively all of the strong liberals voted for Biden, and effectively all of the strong conservatives voted for Trump. The voters in the ideological middle, unsurprisingly, featured the most competition between the two candidates. Abramowitz reports that the liberal-conservative ideology scale is a stronger predictor of vote choice than party identification and a much stronger predictor than demographic characteristics like race, age, and education.

The overall takeaway: The party divide is very deep, and the parties are ideologically sorted, with strong liberals in the Democratic Party and strong conservatives in the Republican Party. It was not always like this — the parties of the mid-20th century were not well-sorted on ideological lines — but it is the reality now.

Are we polarized yet? Part two

Our friend Alexander Theodoridis, who helped launch the UVA Center for Politics and is now an associate professor at the University of Massachusetts Amherst, passes along the latest results from the UMass Poll, a national survey conducted late last month by YouGov. Roughly two-thirds of Democrats (64%) and Republicans (68%) strongly or somewhat agreed with a statement saying that many members of the other party “are not just worse for politics — they are downright evil.” The full poll, which asked about a wide variety of topics including President Biden’s approval rating, the partisan divide on acknowledging his victory, election law changes, and much more, is available here.