Since the Crystal Ball’s redistricting update last week, a few more states have enacted or advanced maps — a testament to how quickly the process can move. In the past week, much of the action has been out west, with 4 states finalizing maps.

Idaho: We’ll start in Idaho, a Republican-dominated state that employs an independent redistricting commission. Though the commission floated a draft map that paired the Mormon-heavy southeast with the more Libertarian panhandle, the commission opted to make only small changes to account for population changes. Boise’s Ada County will continue to be split between two Safe Republican seats. We’ll likely need to wait until the fast-growing state adds a third district before there’s any real redistricting drama, although that could come as soon as the next census.

Montana: Another red state with an independent commission, Montana regained a second district — before it became an At-Large state, in 1992, it was split between an eastern and western district. Three decades later, the commission recreated that divide.

The new MT-1 takes up most of the state west of Bozeman, and includes the state’s liberal bastion, Missoula. On the whole, the new district is Republican-leaning, but it is often decided by single-digits — it supported Donald Trump last year by 7 points, and Sen. Steve Daines (R-MT) carried it by just over 1 point against then-Gov. Steve Bullock (D-MT). However, MT-1 gave Sen. Jon Tester (D-MT) a nearly 10-point margin in 2018, so it may not be completely out of reach for Democrats in the future.

For now, we’re rating MT-1 as Likely Republican. Both parties have multiple candidates running in their respective primaries, but the frontrunner for the GOP nomination, and general election, is Republican Rep. Ryan Zinke. After representing the At-Large district for one full term, Zinke departed Congress to lead Trump’s Interior Department.

Current Republican Rep. Matt Rosendale hails from eastern Montana, so he should slide easily into the new MT-2. Rosendale won by 13 points last year, but that margin will almost certainly increase next year — eastern Montana is the more Republican half of the state.

Nevada: With control of the redistricting process, Democrats sought to lock in their current 3-1 advantage in the Silver State’s delegation. The catch for them, though, is that Nevada only voted for Joe Biden and Hillary Clinton by about 2.5% apiece, so there is only so much “wealth” to spread around among their members’ districts. Similarly, the state’s largest county, Las Vegas’ Clark County (where all 3 Democrats come from), is blue, but not overwhelmingly so — both recent Democratic presidential nominees carried it by about 10 points.

Democrats’ solution, as the Crystal Ball suggested in our Nevada preview, was to unpack Rep. Dina Titus’s (D, NV-1) urban Las Vegas district — although they did so to a greater extent than we may have anticipated. As NV-1 relinquishes nearly all its Las Vegas proper precincts to take in all of the suburban city of Henderson, Biden’s share in the district drops from 61.5% to 53%. On its face, this may not seem like welcome news for Titus, but as a non-Hispanic white Democrat, the racial dynamics may work in her favor: the new NV-1 is only 32% Hispanic by composition, down from her current seat’s 47%. Though this drop may dissuade potential Hispanic primary challengers, 2022 may mark a return to the late 2000s for Titus, when she briefly held a competitive seat (she lost it in 2010, but staged a comeback for the safer seat in 2012).

While the new demographic configuration of NV-1 may prompt litigation, we are assuming the lines stand.

Elsewhere in the Las Vegas metro area, Rep. Susie Lee (D, NV-3) is the biggest beneficiary of the new map, at least in terms of up-ballot partisanship. At the presidential level, her existing Trump-to-Biden seat was decided by about 900 votes last year, but as it becomes a more urban district, Biden’s margin there grows to nearly 7 points. So this formerly 50/50 district is now more Democratic than the nation as a whole. In 2018, Lee won the existing district as an open seat by 9 points, but had a closer race last year.

NV-4, held by Rep. Steven Horsford (D), retains all of heavily Democratic North Las Vegas, as well as a sampling of rural “cow counties” north of the city. Importantly, though, the already slightly-blue 4th District gained several dozen closer-in Las Vegas precincts, which would have collectively broken 62%-36% for Biden — this pushes the district just over 4 points more Democratic, for an 8-point Biden edge overall. Considering that movement, it is possible that Horsford, who lost by less than 3 points in 2014 but came back in 2018, would not have seen his tenure broken last decade if these lines were in place then.

Finally, though it trades out a county or two, Republican Rep. Mark Amodei’s 2nd District is basically unchanged. Washoe County, which houses Reno and has a blue-ish purple lean, makes up just over 60% of the district, but NV-2 takes in all or parts of several more rural counties that skew heavily GOP. The result is a district where Democrats can sometimes come within 10 points, but actually getting to a majority is hard. Since its establishment in 1982, NV-2 has only sent Republicans to Congress.

While we are rating NV-2 as Safe Republican, we are starting the 3 Clark County seats off as Leans Democratic. If the national environment is bad enough, Democrats may regret diluting their strength, although they now have a better chance to preserve their 3-1 edge in the state’s delegation than they would have had under the old map.

Utah: In Utah, Republicans sought to secure their monopoly on the state’s 4-member delegation. Though a 2018 ballot measure established an independent commission, the heavily Republican legislature was not obligated to accept its recommendations — and lawmakers indeed went their own way.

Perhaps the most notable part of Utah’s newly-enacted map is Salt Lake County: the state’s most populous county was essentially turned into a pizza, as it was sliced, relatively equitably, among all 4 districts. On the current map, the county is only split among 3 districts.

While Salt Lake City itself is only cut between two districts, just to its south, every member of the delegation will have a piece of the city of Millcreek, which has a population of about 64,000.

Not surprisingly, under the new lines, none of the 4 seats should be competitive, at least for the near term: last year, Trump would have carried all the districts with between 56% and 60% of the vote. So, if Clark County, NV shows how splitting a metro area can benefit Democrats, Salt Lake County, UT illustrates how that same technique can bolster Republicans.

The biggest winner, though, is clearly first-term Rep. Burgess Owens (R), who narrowly flipped the 4th District in 2020: Trump’s margin in UT-4 expands from 52%-43% to 60%-34%, making it the reddest district in the state. Democrats may take some solace in the fact that had then-Rep. Ben McAdams (D, UT-4) held on last cycle (he lost to Owens by 1 point), he’d have had an even tougher time in 2022, with these lines.

The 3 other Republican members all should have little to fear for 2022. Though his district expands to take in about 35% of Salt Lake City, Rep. Blake Moore (R, UT-1) retains a northern Utah district. Rep. Chris Stewart (R, UT-2) will continue to represent the western counties of the state, while Rep. John Curtis (R, UT-3) keeps a Provo-based eastern seat. All are Safe Republican.

Washington: While we’re out west, we’d also like to note some developments in Washington state. The state’s independent commission had until midnight on Monday to produce maps. When that deadline passed and no maps were released, commissioners released a statement acknowledging that they had failed to agree on a plan.

With the commission gridlocked, the process was kicked to the state Supreme Court, which is technically nonpartisan but functionally controlled by Democrats. However, later on Tuesday, the commission seemed to backtrack and released a consensus map, which they are now encouraging the court to adopt.

Electorally, the post-deadline commission map would essentially amount to a minimal change plan: aside from the 8th District, a light blue seat that Democrats hold, they would be strong favorites to keep their 6 other districts, while the map would also retain 3 Trump-won seats. It is unclear whether the state’s high court will go along with this plan.

With Leahy retirement, the end of an era in Vermont

Though his decision probably won’t have much of an impact on the chamber’s balance of power, one of the most notable Senate retirements of the cycle came on Monday, when Sen. Patrick Leahy (D-VT) announced his retirement. As the last Democratic member from the 1974 Watergate Class remaining in office, Leahy rose to his current post as Senate President Pro Tempore and is Vermont’s longest serving senator.

One other distinction that Leahy has — which may come as a surprise to some, given the state’s recent lean in presidential elections — is that he is the only Democrat Vermont has ever sent to the Senate. Remember: Sen. Bernie Sanders is technically an independent.

Leahy was first elected in the pro-Democratic 1974 cycle. Against Republican Rep. Richard Mallary, he ran on his background as a state’s attorney. An Irish Catholic, he performed best in the heavily Catholic Burlington area, in the northwest. As an interesting twist, that election also featured Sanders, who took 4% of the vote running under the Liberty Union Party banner.

Leahy’s initial election was historic, but his reelection in 1980 may have been his most crucial test. That year, he impressively secured another term, while many of his Senate Democratic colleagues lost in the Reagan wave. Though Vermont’s traditional GOP loyalties were beginning to wane — Ronald Reagan carried it with only 44%, as it was independent candidate John Anderson’s second-best state (his best was neighboring Massachusetts) — Leahy still had to run considerably ahead of then-President Carter’s 38% (Map 1). 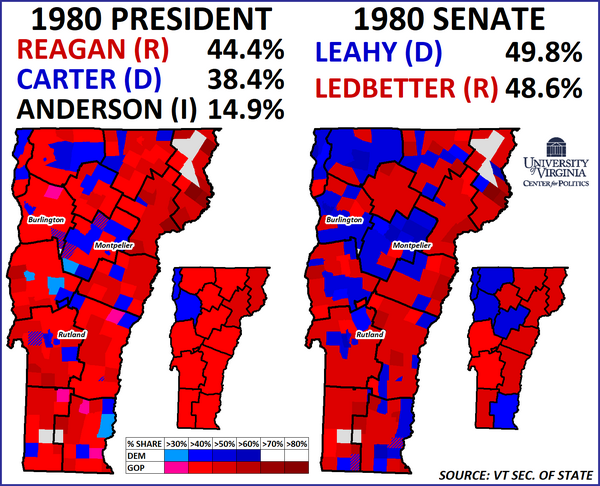 As one edition of the Almanac of American Politics summed up, Leahy held on in that tough Democratic year because he espoused “Vermont values” — a phrase the senator incorporated into his remarks on Monday. In any case, after 1980, Leahy began to win by much more comfortable margins.

Democratic Rep. Peter Welch, who has represented the state’s At-Large district in the House since his election in 2006, is seen as the likely frontrunner for the open Senate seat. At 75 on Election Day 2022, though, Welch would be one of the oldest incoming senators in recent memory. While there are no shortage of Democrats who could run for Welch’s district, first-term Lt. Gov. Molly Gray is considered a likely candidate. To date, Vermont has only elected men to Congress, so Gray, or any other female nominee, could make history next year.

Though moderate Republican Gov. Phil Scott is popular, and would be the GOP’s best recruit, he has repeatedly ruled out a Senate run. Though Republicans have some other options who could potentially push the seats to the edge of the board, we’re keeping the Senate seat as Safe Democratic, and we’d be inclined to keep an open House seat there as well.