— Ross Perot, who died earlier this week, provided something of a template for Donald Trump. He also was the best-performing third-party presidential candidate since Teddy Roosevelt in 1912.

— They are not top-tier races, but there have been noteworthy Senate developments on the outer fringes of the competitive map in Kansas, Kentucky, and Virginia.

There is a great quote from George McGovern, the 1972 Democratic presidential nominee and South Dakota senator: “You know, sometimes, when they say you’re ahead of your time, it’s just a polite way of saying you have a real bad sense of timing.” Given how American politics has developed over the past half-century, that may be a fitting way to look at businessman Ross Perot, who died Tuesday at the age of 89.

Perot ran two of the most credible third-party presidential bids in American history, garnering 19% of the vote in 1992 and a still-impressive 8% in 1996. Despite his showing, he didn’t win any electoral votes, confirmation of how the Electoral College helps perpetuate the nation’s two-party duopoly.

Nonetheless, the themes of Perot’s campaigns provided something of a preview of Donald Trump, as he ran an outsider, populist campaign that was critical of free trade. Perot’s economic orthodoxy, at least as expressed in his campaign, probably existed to the left of the GOP, which one could also say about Trump, at least as a candidate if not necessarily in practice as president. This is not to say that Perot and Trump were platform twins. Contrary to Trump, Perot was pro-choice on abortion, and the Texan did not engage in race-baiting, which has been a staple of Trump’s career before and during his White House years.

Perhaps if Perot had been 25 years younger and came around for the 2016 Republican primary instead of Trump, he’d be in the White House right now. Instead, Perot ended up as something of a forerunner to Trump. Perot’s homespun quips and memorable soundbites were different than Trump’s often coarse ones, but they had the same effect on his followers; the most fervent base prior to Trump’s may have been the so-called “Perotistas” of 1992.

As it was, Perot produced the best presidential vote share of any non-Democrat or non-Republican since former President Theodore Roosevelt, running as a Bull Moose Progressive, won 27% of the vote in 1912. Table 1 shows the history of third-party performance since 1912. 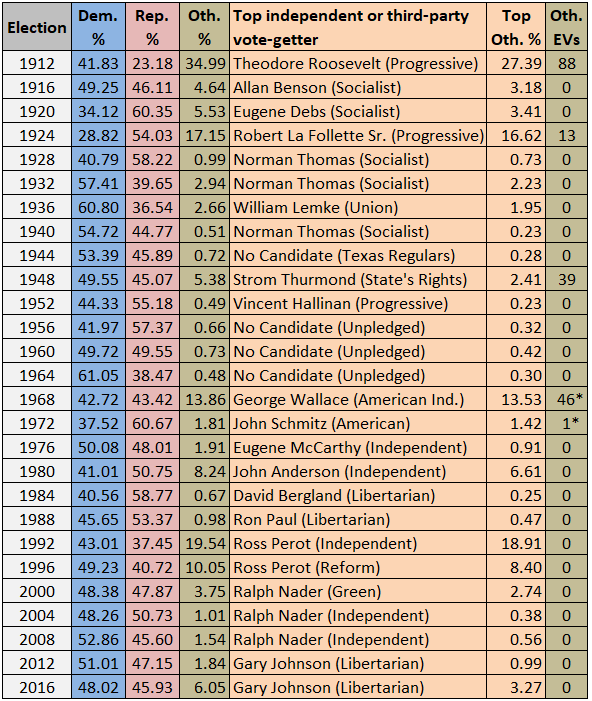 Perot’s passing reignited a long-simmering debate about who Perot hurt and who he helped in 1992, when Bill Clinton unseated incumbent President George H.W. Bush. Some Bush backers are still convinced that without Perot in the race, Bush would have beaten back the Clinton challenge. Hypotheticals are difficult to prove, but we believe the evidence accumulated from 1992 onwards strongly suggests that Clinton would have won a two-way contest — and received the elusive majority he failed to win in both 1992 (43%) and 1996 (49%). But judge for yourself — here are some useful pieces about this enduring political question:

— First, we recommend this instructive video from FiveThirtyEight about the “myth” that Perot cost Bush the 1992 election.

— This Washington Post article was published after the 1992 election and focuses on the Election Day exit polls. It concludes that Perot did not change the outcome of the election.

— MSNBC published this analysis in 2015 when Trump was considering running as an independent rather than a Republican. It shows that Bush would have needed to win two-thirds of Perot voters to win the 1992 election — a very unlikely outcome given the hostility to Bush among a large percentage of Perot’s base.

National Republicans groaned Monday as Kris Kobach (R), a far-right former Kansas secretary of state and weak 2018 gubernatorial nominee, announced a bid for Senate. While Kansas is a very Republican state — it hasn’t elected a Democratic senator since 1932 — it also has a significant contingent of moderate Republicans that might recoil at a Kobach candidacy. We moved the race from Safe Republican to Likely Republican earlier this week, just as a precaution. Outside Republicans groups are openly slamming Kobach and assuredly will work against his nomination if needed. Trump endorsed Kobach in the 2018 gubernatorial primary.

The seat became open after Sen. Pat Roberts (R-KS), himself a weak performer in 2014, announced his retirement. Roberts beat independent Greg Orman by about 11 points in 2014, which amidst a sterling GOP environment was still the weakest showing for a GOP Senate candidate since a 1996 special election there held to replace Bob Dole, who had resigned his seat in the midst of his unsuccessful presidential bid.

In any event, there very well could be competitive primaries on both sides. For the Republicans, besides Kobach, state Treasurer Jake LaTurner and former NFL player Dave Lindstrom are already in the mix, and Rep. Roger Marshall (R, KS-1) and state Senate President Susan Wagle may also join the race. Matt Schlapp, chairman of the American Conservative Union and frequent TV defender of the president, is another possibility (his wife, Mercedes, recently joined the president’s reelection campaign after serving in a top White House communications position).

Former U.S. Rep. Nancy Boyda (D, KS-2) and former U.S. Attorney Barry Grissom are running on the Democratic side, but the most intriguing potential candidate hasn’t officially entered the race yet: state Sen. Barbara Bollier, who switched parties after the election and who is representative of the kinds of Kansans (moderate Republicans) that any Democrat would need to win.

Senate Majority Leader Mitch McConnell (R-KY) has made no secret of the fact that his dream candidate is U.S. Secretary of State Mike Pompeo, who represented KS-4 in the House before becoming CIA director and then leading the State Department. Pompeo seems to still be entertaining the idea.

Speaking of McConnell, he got a notable challenger in his own reelection bid earlier this week when retired Marine pilot Amy McGrath (D) entered the race. McGrath lost a close race against Rep. Andy Barr (R, KY-6) last fall, but became something of a national sensation thanks to a splashy announcement video and her primary upset against former Lexington Mayor Jim Gray (D), who himself challenged Sen. Rand Paul (R-KY) in 2016. We are holding Kentucky at Likely Republican: Even though McConnell carries baggage as the leader of his party’s Senate caucus and isn’t popular, Kentucky has become very Republican. Readers may remember that McConnell’s 2014 race seemed very competitive throughout that cycle, but we never bought the hype, holding that race at Likely Republican the whole time. McConnell ended up winning by 15 points. McConnell likely will run behind Donald Trump in Kentucky — the state is less Republican down the ballot than it is for president — but we need to see a great deal of persuasive evidence before declaring him truly vulnerable. The gubernatorial election this fall will provide some clues: If Gov. Matt Bevin (R-KY), who has very weak numbers himself, nonetheless triumphs against a Democratic challenger who is more proven than McGrath, state Attorney General Andy Beshear (D), that will be even more of a signal that the Bluegrass State just isn’t really open to voting Democratic for much of anything these days. It is also not a guarantee that McGrath will have the Democratic field to herself.

One other note: Sen. Mark Warner (D-VA) also picked up a challenger this week, former Rep. Scott Taylor (R, VA-2). Taylor, a former state delegate, defeated a sitting House member, Randy Forbes, in a 2016 primary after Forbes switched districts following court-ordered modifications to the state’s congressional districts, which effectively made Forbes’ old district, VA-4, unwinnable for a Republican. Taylor won in 2016 but lost in a close race to Rep. Elaine Luria (D, VA-2) last November, and he found himself bogged down by a scandal in which members of his staff allegedly forged signatures to help his 2016 challenger get on the ballot as an independent as a way to hurt Luria. One of those staffers was indicted in May, and the investigation continues.

Taylor has his problems, but he also is a better candidate than Republicans might have otherwise fielded; certainly he is more credible than Corey Stewart (R), the neo-Confederate rabble-rouser who ran a weak challenge to Sen. Tim Kaine (D-VA) last cycle. Taylor’s chances are probably dependent on Trump winning Virginia in 2020, which seems unlikely although is not impossible if the president is otherwise running considerably better than he did in 2016 nationally. That said, Taylor seems capable of at least converting Trump votes into votes for himself, which should keep him within range of Warner, who shockingly nearly lost in 2014. We continue to rate the Virginia Senate race as Likely Democratic.

None of Kansas, Kentucky, or Virginia is likely to make or break the Senate majority next year: Realistically, we’re closer to rating all of them as Safe as opposed to Leans in our ratings. But the action in those states reminds us that there is more going on in the battle for the Senate than in just the topline races. 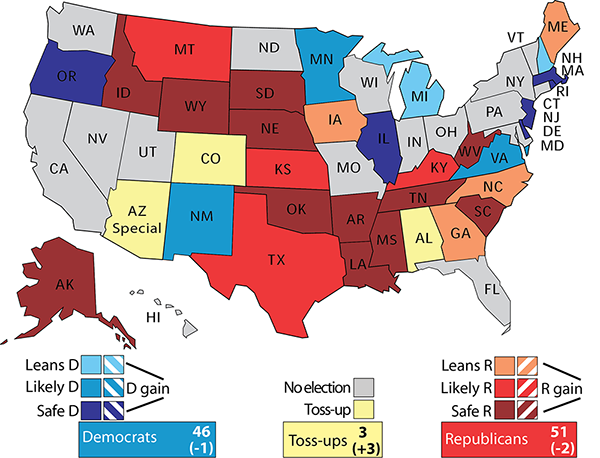 The morning of July 4, Rep. Justin Amash (I, MI-3) declared his independence from the Republican Party. Amash, a conservative who has long been a thorn in the side of party leadership, stuck his neck out when he endorsed opening impeachment proceedings against President Trump in the wake of the release of the Mueller Report. He had at least four primary challengers, according to Politico.

It seemed possible, at least to us, that Amash could emerge from a primary if the vote was splintered, given that Michigan has no runoff. But he decided to simply leave the party.

It’s hard to be a true independent in the House, because even independents typically need to pick one party caucus or the other to get committee assignments. For instance, even though Sens. Bernie Sanders (I-VT) and Angus King (I-ME) are technically independents, they are members of the Senate Democratic caucus, which allows them to serve on committees in the Senate. Amash left the Republican caucus and resigned his post on the House Oversight Committee. To borrow the immortal words of Keith Richards, he walked before they made him run: Republicans were not going to allow Amash to remain in their caucus or serve on Oversight following his departure from the party.

Amash said he will run for reelection as an independent, although it seems possible he may run as a protest presidential candidate, either as an independent or as the Libertarian nominee. If Amash does remain on the ballot, a three-way race would be hard to predict. His western Michigan-based district, MI-3, is effectively a version of the seat that former President Gerald Ford (R) held while he was in Congress. MI-3 definitely leans Republican, though not overwhelmingly so: Trump won it 51%-42%, and it was considerably closer in the state’s gubernatorial and Senate races last year, according to Bloomberg’s Greg Giroux. The heart of the district is the Democratic city of Grand Rapids, county seat of Kent County, a usually Republican but Democratic-trending swing county. Indeed, if you’re looking for a place that voted for Trump in 2016 but might vote Democratic for president in 2020, Kent County, which is mostly contained in Amash’s district, is a good possibility.

The combination of a potential blue trend in MI-3 and a possible three-way race pushed us to move MI-3 from Likely Republican to Toss-up. We might move it to Leans Republican, though, if Amash leaves the race and it becomes a standard Republican vs. Democrat contest. We do think it should be competitive regardless, though.