Wisconsin is a state that features competitive races for both Senate and governor, though only the latter contest saw a notable primary. For the past few months, the Democratic primary for Senate seemed like a fluid contest, but in the weeks leading up to the election, 3 of Lt. Gov. Mandela Barnes’ opponents dropped out of the race and endorsed him — with that, Barnes took the Democratic nomination with close to 80% of the vote. He will move on to face Sen. Ron Johnson (R-WI), who easily won renomination as he seeks a third term. We are keeping this race as Leans Republican. Johnson has a penchant for stoking controversy, but made an impressive comeback in 2016, after essentially being left for dead. Johnson was reelected in 2016, in large part, by overperforming in the suburban counties around Milwaukee — last night, Johnson did better in the “WOW” counties than he did statewide in his own uncompetitive primary, which is perhaps an indication that his support there is still firm.

In contrast to the Senate, which had sleepy primaries on both sides, the Republican primary for governor was a hard-fought race that tuned nasty in its final stretch. Former Lt. Gov. Rebecca Kleefisch, who ran, in large part, on her connection with former Gov. Scott Walker (R-WI), initially seemed a favorite, but lost to Donald Trump-endorsed businessman Tim Michels. Michels lost handily to then-Sen. Russ Feingold (D) in 2004, and has reentered politics after a nearly 20-year hiatus. In his 2010 primary for governor, Walker racked up huge margins in the Milwaukee suburbs, while losing the (now-Trumpier) rural areas of the state. But Kleefisch simply didn’t get the margins she needed in the former: while Walker took close to 80% in Waukesha County (just west of Milwaukee County) 12 years ago, Kleefisch took just a bare majority.

The gubernatorial primary was almost an exact mirror image of the 2018 Republican primary for Senate. The Milwaukee suburbs were the lynchpin of then-state Sen. Leah Vukmir’s 49%-43% win over veteran Kevin Nicholson (Nicholson was a gubernatorial candidate this year but dropped out in advance of the primary). Vukmir ran with more institutional support, while Nicholson made overtures to Trump’s supporters, getting Steve Bannon’s endorsement. Map 1 shows the races. 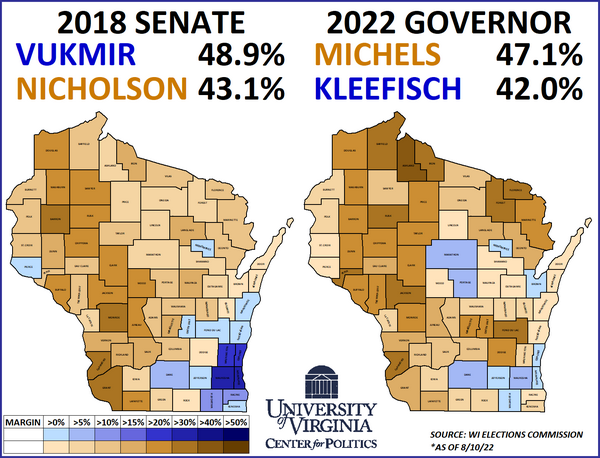 There were some differences between the 2 contests. Kleefisch, picked up some populous counties up north that Vukmir, as a Milwaukee-area legislator, may have had less appeal in — specifically Green Bay’s Brown and Wausau’s Marathon. Compared to Nicholson, Michels performed better in Dodge County, where his construction business is based. But broadly, the coalitions were similar, with the more “rural” candidate turning a 6-point loss in 2018 into a 5-point win this year.

As an aside, Robin Vos, the Speaker of the State Assembly — and one of Evers’ biggest nemeses in the legislature — only barely survived a primary for his Racine County seat. Though Vos, over his tenure, has very much been a team player for his party, he did not push to have the 2020 election in the state overturned, which prompted former President Trump to get involved against him.

Minnesota was the scene of last night’s only special congressional election. After Rep. Jim Hagedorn (R, MN-1) died earlier this year, former state Rep. Brad Finstad won the GOP nomination to replace him in May. Democrats nominated Jeff Ettinger, a former CEO of Hormel Foods, which is headquartered in the district. MN-1 borders Iowa and, like its southern neighbor, it was a Barack Obama-to-Donald Trump constituency: After Obama narrowly carried it in his elections, Trump carried it 53%-38% in 2016, and held it 54%-44% in 2020.

But like the special election several weeks ago in Nebraska’s 1st District, the result was a surprisingly good one for Democrats, at least compared to the 2020 presidential results. Finstad won 51%-47%. Like the Nebraska election, the bluer areas of the district seemed to punch above their weight: Rochester’s Olmsted County, a historically Republican county that has trended blue recently, made up close to 30% of the district’s vote, up from about a quarter in the 2020 general election.

When we first discussed this race, we posted this map comparing 2012 to 2020 in the district (Map 2). Ettinger ran about 7-8% ahead of Biden in both the blue Obama/Biden counties and the purple Obama/Trump counties. But what undoubtedly helped Finstad is that there was no change in the red Romney/Trump counties: his 29.7% margin matched Trump’s exactly. 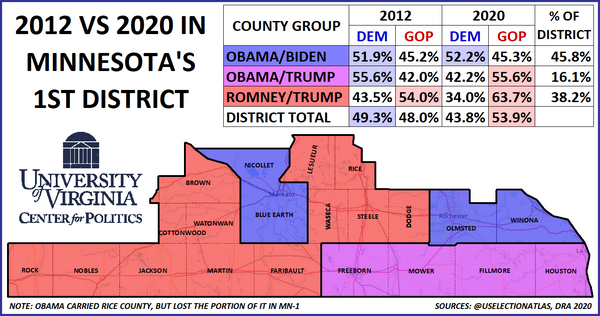 The general election will feature the same major party nominees in a fundamentally similar district, so given the fairly close result, we think bumping its outlook down from Safe Republican to Likely Republican is warranted. Something that may frustrate Democrats is that 2 pro-marijuana third party candidates will be on the November ballot — that was also the case with this special election, but as Finstad took a majority, they didn’t spoil the race for Ettinger.

It’s also worth noting that Hagedorn, the late former incumbent, lost in 2016 and won in 2018 by razor-thin margins, and then captured a second term by about 3 points in 2020 — so Democrats have done better down the ballot recently in the district. Gov. Tim Walz (D-MN), who is from the district and preceded Hagedorn in the House, will also be leading the Democratic ticket as he seeks another term as governor.

Other than the MN-1 special election, Minnesota’s primaries were mostly uneventful, with the exception being in Minneapolis’s 5th District. Rep. Ilhan Omar (D, MN-5), a member of “The Squad” drew a challenge from former Minneapolis City Councilmember Don Samuels. If elected, Samuels was promising to legislate in a more collaborative fashion, and drew some notable endorsements, including Minneapolis Mayor Jacob Frey and the Star Tribune. Omar held on 51%-48%, winning thanks to her strength in the closer-in precincts of Minneapolis. Omar was lucky that Minnesota, somewhat unexpectedly, retained all 8 of its seats in the last census: if it dropped to 7, MN-5 would have expanded into areas that would have likely favored Samuels. In any case, the seat is safely blue, and Omar has 2 more years to work the district before her next primary.

Several of the races we’ll be watching in the Nutmeg State this fall did not feature primaries. Gov. Ned Lamont (D-CT) will face a rematch with businessman Bob Stefanowski (R). Lamont won by about 3 points in 2018, although that was a bigger margin than his predecessor Dan Malloy’s (D) closer victories in 2010 and 2014. We rate this race as Likely Democratic for the fall. Republicans are hoping to compete for a couple of House seats here as well, as Reps. Joe Courtney (D, CT-2) and Jahana Hayes (D, CT-5) face a couple of well-regarded but not well-funded Republicans with state legislative experience, state Rep. Mike France (R) and former state Sen. George Logan (R), respectively. Joe Biden won a little under 55% in each district, although Hillary Clinton only won pluralities in 2016 (the less ideologically-defined Trump of 2016 was a stronger candidate in New England than he was as a more clearly conservative Republican incumbent in 2020). We continue to rate CT-5 as Leans Democratic and CT-2 as Likely Democratic.

There was, however, a primary for the GOP’s Senate nomination. We mentioned last week the possibility that Sen. Richard Blumenthal (D-CT) could hypothetically be a deep sleeper Republican target in November in the event of a Democratic collapse. But the deep sleeper is now in true hibernation as GOP primary voters picked Trump-backed Leora Levy, a strong social conservative that Trump nominated to be ambassador to Chile, over former state House Minority Leader Themis Klarides, a moderate. Klarides was a more credible option, in our view, in a Democratic-leaning state. Blumenthal’s reelection bid remains rated Safe Democratic.

Vermont, a one-time Yankee Republican stronghold, has long since shed that lineage in most races. But Gov. Phil Scott (R-VT) — running for a 4th, 2-year term — is a successful, throwback moderate Vermont Republican who has won a couple of easy reelection bids in this otherwise deeply Democratic state. Scott does have some critics to his right, and it shows up in primaries — he got about 70% in his renomination bid, similar to the past couple of cycles. Activist Brenda Siegel (D), who unsuccessfully sought the Democratic nomination for governor in 2018 and lieutenant governor in 2020, was unopposed for the Democratic nod. This race was basically locked up for Scott as soon as he launched his reelection bid; we rate the contest as Safe Republican for the fall.

In the state’s at-large House seat, state Senate President Pro Tempore Becca Balint (D) is now on track to become the first woman elected to Congress from Vermont after easily winning the primary to replace Welch. Assuming Balint wins in the fall, every state will have elected at least one woman to Congress (Vermont is the last holdout). Balint’s top endorsers were progressives like Sens. Sanders and Elizabeth Warren (D-MA). The Republican nomination went to someone who does not appear to be an actual Republican — veteran and antiwar activist Liam Madden, who considers himself an independent. Reporting as of Wednesday morning suggested he might end up declining the nomination. This is a Safe Democratic seat.