Wyoming, with its small population and deep red hue, usually sees little attention but hosted a nationally watched primary last night — even if the results went as predicted. Just 2 years ago, Rep. Liz Cheney (R, WY-AL) was one of the top Republicans in the House GOP conference, but she ramped up her criticism of now-former President Trump in the wake of the Jan. 6 insurrection. Since then, as vice chair of the select committee investigating the insurrection, Cheney has continued to make the case against the former president to a national audience. While her commitment to principle may be admirable, this was clearly not a message that the Wyoming Republican electorate wanted to hear.

Though she was, for a time, allied with Cheney, attorney Harriet Hageman, who ran unsuccessfully in the state’s 2018 gubernatorial primary, got into the race. With an endorsement from Trump, she was basically able to consolidate the anti-Cheney vote. Though Cheney was considerably better funded than her opposition, much of the $15 million she raised came from out of state, which perhaps bolstered Hageman’s case the incumbent had lost touch with the state.

The results of last night’s primary broke down essentially as a typical partisan race in Wyoming would have. As Hageman claimed the nomination in a 66%-29% vote, Cheney carried the state’s 2 Joe Biden-won counties, Albany and Teton. Cheney’s strength in the latter was especially impressive, considering the magnitude of her loss. Encompassing much of Wyoming’s portion of Yellowstone National Park, Teton County is also home to the touristy Jackson Hole ski area — Cheney took 75% there and, though it was a midterm primary, she received more raw votes there than recent GOP presidential nominees have in their general elections. Albany County, in the southeastern quadrant, is home to the University of Wyoming in Laramie — Cheney (and Biden) posted narrow wins there.

The GOP 2-party advantage in the primary vote was more lopsided than usual, suggesting that at least some Democratic partisans voted for Cheney. But in a state that is over 70% Republican by registration, Cheney was always going to have an uphill fight if her standing within her own party was weak, which was obviously the case.

In the final days of the campaign, Cheney spoke directly to the camera in an ad that seemed aimed at voters outside of Wyoming. Perhaps we’ll see more of Cheney down the line, but starting next year, the reddest state in the Union will be represented by a much more reliable Trump ally.

If the Wyoming House primary was a fairly open-and-shut case, the contests in the Last Frontier, which also voted last night, offered considerably more intrigue.

As ballot counting is not yet finalized in Alaska, we are hesitant to draw firm conclusions for now. However, we thought it would be worth parsing over the results we have so far.

In a special election for Alaska’s single House seat, voters are choosing a successor to state’s late (and very colorful) Republican congressman, Don Young — Young, who died in office back in March, represented the 49th state for 49 years. Importantly, this race is a test case of the state’s new ranked choice “tundra primary” system. In June, voters chose from a list of nearly 50 candidates. Theoretically, the top 4 vote-getters were slated to advance to a second round which would be held under ranked-choice rules. But former Senate candidate Al Gross, an independent, made the cut but dropped out shortly after, so this contest has 1 less contender than it should. Without Gross, the 3 contenders on last night’s ballot were Republicans Sarah Palin — the state’s former governor and 2008 vice presidential nominee — and Nick Begich, as well as former Democratic state legislator Mary Peltola.

With early and partial returns, Peltola sits at just under 38%, while Palin is taking 32% and Begich is at 29%. As much of the Native-heavy Alaska Bush has yet to be tallied, it seems that Peltola’s numbers may have room for growth. But it is easy to see Palin and Begich being the second choice of each other’s voters, so once the ranked-choice algorithms kick in, things will likely look better for Republicans. However, some pre-election polling suggested that Palin could be weaker than Begich in attracting the second-place votes of GOP voters, which leaves the window cracked open for Peltola to spring an upset, if it ends up being her against Palin in the final RCV round. The ranked-choice vote reallocation is scheduled to happen a couple of weeks from now, so we’ll have to wait to find out.

The second round for the special House election was held concurrently with the first round of the regular election (the second round of the regular election will take place as other states have their November general election). Peltola, Palin, and Begich are set to square off again in a few months, although this time, they should actually have a fourth opponent — that berth has not been called yet, as no other candidates are currently taking over 5%, although Republican Tara Sweeney seems the likeliest option.

In the Senate race, moderate Republican Lisa Murkowski (R-AK), who has cobbled together unique political coalitions in the past, will make the second round with Trump-endorsed Republican Kelly Tshibaka — the 2 other second-round berths have not been called as of this writing. Perhaps importantly, Patricia Chesbro, the top Democrat in the race, is only earning 6% — a sign that Democrats may have supported Murkowski en masse.

In the state’s initial batch of returns, which accounted for about 50% of the estimated vote and included the Trumpier Election Day vote, Murkowski and Tshibaka were tied at about 42% apiece. With closer to 70% reporting at the time of this writing, Murkowski’s lead has expanded to 44%-40%, and with later arriving ballots from the Bush (where Murkowski usually runs well) still to come in, the incumbent’s lead may increase by more.

We’ll have more to analyze once all the votes are in, but this is clearly, for the purposes of the Crystal Ball’s ratings, still very much a Safe Republican race — although there are big differences between the mavericky Murkowski and the Trump-aligned Tshibaka.

In the race for governor, Gov. Mike Dunleavy (R-AK) will advance to a rematch (of sorts) with his predecessor, independent Bill Walker. Dunleavy challenged Walker, who was then the incumbent, in 2018, but Walker dropped out late in the race, as former Sen. Mark Begich (D-AK) gained traction as the most viable anti-Dunleavy option. Democrat Les Gara will also advance, while the last berth has not been called. The Crystal Ball rates the race as Likely Republican.

Moving back into the Lower 48, Washington state’s primary was August 2, but as a predominantly mail-in state, its results took a few weeks to tabulate. With results there basically finished, we have a few observations.

Earlier this year, we moved the state’s Senate race onto the board, moving the contest from Safe Democratic to Likely Democratic. Though 5-term Sen. Patty Murray (D-WA) is, by this point, an institution in state politics, Republicans were optimistic that their candidate, nurse and veterans advocate Tiffany Smiley, could compete.

While we kept an open mind, we were not impressed with Republicans’ showing in the state’s blanket primary.

With results final, Murray is sitting at just above 52%, while Smiley took about 34%. In aggregate, Democrats outvoted Republicans 57%-43% in the overall 2-party vote. In 2010, the last time Murray had a truly competitive race, Republicans actually outvoted Democrats in the primary — but she still went on to win by almost 5 points in what was a rough cycle for Democrats. Map 1 compares the primaries in 2010 and 2022. 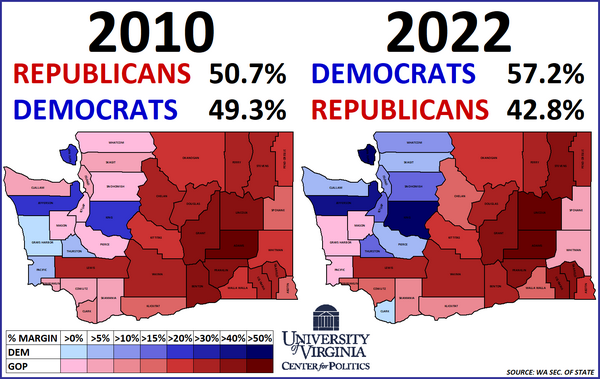 Overall, the 2022 picture for Murray looks much less dire than 2010 did. Though Democrats traded away 2 Trumpy counties that hug the Pacific Ocean, they picked up almost every county bordering the Puget Sound. In Seattle’s King County, the Democratic margin more than doubled, going from 24% to 51% — if that margin holds up in the general election, it is going to be almost impossible for Republicans to offset. With these results in mind, we’re moving the race back to Safe Democratic.

Democrats had a better-than expected showing in the suburban 8th District, a Biden +7 seat held by 2-term Democrat Kim Schrier. King County Councilmember Reagan Dunn, the son of the district’s late representative, Jennifer Dunn, seemed to be one of national Republicans’ more highly touted challengers, but he placed third. Instead, Schrier’s Republican opponent will be Matt Larkin, the GOP’s 2020 nominee for state Attorney General. Though we are keeping the race as a Toss-up, it bodes well for Schrier that Democrats narrowly outvoted Republicans in this seat — she held on in 2020 even after Republicans got more votes in the primary, and this area also tends to be redder down the ballot (Democratic Gov. Jay Inslee has never carried it).

In the southwestern 3rd District, Jaime Herrera Beutler, a pro-impeachment Republican, placed third in her primary, and was squeezed out of the general election — she may be the first member from the state in 90 years to be primaried out. Though Democratic nominee Marie Perez may fare better against veteran Joe Kent, the GOP nominee, than she would have against Herrera Beutler — who, despite her loss this year, has typically garnered some crossover support — we are keeping the race at Likely Republican. This is a district where Democrats can often come close, but getting to a majority is difficult — in the 2016 and 2018 Senate races, for example, Democrats won overall by about 18 points each time, but took 49% in the district.

In the next door 4th District, Rep. Dan Newhouse, who also voted to impeach Trump, may be the only one of the 10 pro-impeachment Republicans to make it back to Congress next year. He placed first in his primary, as a Democrat beat out Trump’s candidate, 2020 Republican gubernatorial nominee Loren Culp, for second place. As Newhouse holds the reddest district in the state, he has little to worry about in the general election. Aside from Newhouse and California’s David Valadao, the 8 other pro-impeachment Republicans have either retired or lost primaries. While Valadao has made it to the general election, he is still not “home free” like Newhouse — in November, he could lose in his Biden+13 Central Valley seat. Democrats are running state Assemblyman Rudy Salas (D) there, and it’s a good thing for them that he’s the candidate there as opposed to former Rep. T.J. Cox (D), who beat Valadao in 2018 and then lost a rematch in 2020. Cox considered running again this cycle but decided not to; on Tuesday, he was arrested by the FBI on what appear to be serious financial fraud charges.

RealClearPolitics analyst Sean Trende, a friend of the Crystal Ball, recently put together an insightful column combing over the Washington results and putting them in historical context — the state’s all-party primary can not only tell us about the fall results in that state, but also about the broader national political environment. Sean’s conclusion is that, with Washington state’s primary as a barometer, 2022 may still well be a promising year for Republicans, but perhaps less so than 2010 or 2014 — this is an assessment that sums up our thinking, as well.