— For talented young political prospects who belong to the minority party in states dominated by one party, the path to statewide advancement is rocky.

— In 34 of the 50 states, a single party controls all of the statewide elected offices.

— Only four states have a relatively balanced mix of Republican and Democratic statewide officeholders.

By historical standards, Pete Buttigieg had a thin record in public office before he embarked upon a presidential run. Buttigieg had served two terms as mayor of South Bend, Indiana, a mid-sized city, and his one run for statewide office — for state treasurer, against a candidate who would later lose a U.S. Senate race ignominiously — ended in failure.

But Buttigieg was, like many politicians with potential, doomed to live in a state trending away from their party. In Buttigieg’s case, a Democrat’s chance of winning statewide office in Indiana seemed — and likely was — smaller than his chance of being elected president. Though he eventually gave in and endorsed rival Joe Biden, Buttigieg ended up as a top-tier candidate, narrowly winning the Iowa caucuses and finishing respectably in the New Hampshire primary — stronger showings than he might have had if he’d run for, say, secretary of state or state auditor back home in Indiana.

Such is the reality in today’s highly polarized electorate. If you are a Democrat serving in local office in a red state, or a Republican serving in a similar post in a blue state, your chances of winning a statewide election have become vanishingly small, thanks to the highly polarized partisan preferences for filling relatively anonymous “row offices.”

To understand this phenomenon fully, we looked at the partisan breakdown of major statewide offices in all 50 states. We focused on these positions — which include everything from governor, attorney general, and secretary of state to state auditor and state agriculture commissioner — because they serve as time-honored tools for ambitious politicians in both parties to climb the political ladder.

For this article, we analyzed elected positions for which the candidates ran with a partisan affiliation. We included lieutenant governors only if they won election on their own, not as part of a ticket. And we did not include positions serving on multi-member commissions, such as boards of regents, or on state supreme courts.

The following tables break down the results by state: 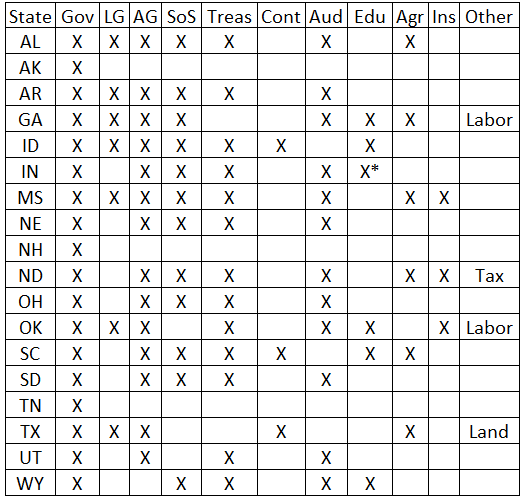 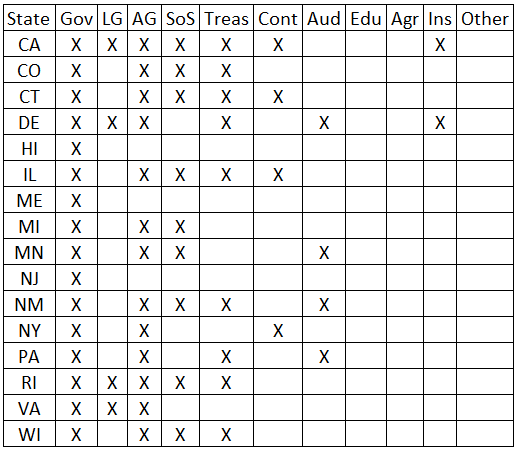 Table 5: Republican sweep except for one non-governor Democratic official (3)

Table 6: Democratic sweep except for one non-governor GOP official (2)

Notes: Elected, partisan positions only. Lieutenant governors included only if elected in their own right, not as part of a ticket. Some minor elected offices excluded. No positions serving on a multi-member commission (such as boards of regents) or state supreme courts are included.

* Position being phased out.

As these charts show, the Republicans swept every statewide office in 18 states, while the Democrats swept in 16 states of their own. In four other states, the Democrats beat the odds by winning the governorship even as they lost every other statewide office. The Republicans managed this trick in another three states. (The governorship, by virtue of its prominence in media coverage, is the most likely position to be evaluated on the candidate’s merits, rather than by partisan preference.)

In three states, the Democrats lucked out by winning one non-gubernatorial seat amid a Republican sweep in those states, while the Republicans managed the same feat in two states.

That leaves just four states in which a state’s minority party managed to win at least two statewide offices. One of these states, Arizona, is undergoing a partisan transition from red to purple. Another state, North Carolina, has been a fierce battleground between the parties in recent election cycles.

A third state, Iowa, has a history as a swing state, although less so today on the presidential level. And the fourth, Washington state, is a curiosity — a solidly blue state where the GOP has managed to hang on to both the secretary of state and state treasurer positions.

For an ambitious politician who has a proven record of winning office in a smaller geographic area — say, in runs for mayor or county executive — this state of play is ominous. Making the leap from local positions to statewide posts today means competing on distinctly unfriendly turf, making the jump harder than ever.

Indeed, in many states, this becomes a vicious cycle. As minority-party politicians turn down longshot bids for state office — opting instead to remain in safer local posts or to simply retire from politics — the minority party’s bench of future statewide candidates withers, further ensuring the party’s long-term demise.

Consider Rhode Island, where Republicans have not won a statewide election since 2006, where just 12% of the electorate identifies as Republican, and where the GOP holds only 14 of 113 General Assembly seats. In Rhode Island, Democrats won uncontested races even in some legislative districts won by Donald Trump in 2016, said Val Endress, a Rhode Island College political scientist.

“The inability to field candidates in favorable districts speaks to the dysfunction of a state GOP organization that is often rife with controversy and infighting, is characterized by lackluster fundraising, insufficient infrastructure, and that expends little effort on candidate recruitment, vetting, and training at both local or state levels,” Endress said.

The flip side can be seen in Tennessee, where, “as far as I can tell, the Democratic Party has been eviscerated,” said University of Tennessee political scientist Anthony Nownes. “This was obvious when the only candidate they could find for the U.S. Senate race in 2018 was former Gov. Phil Bredesen. I can think of no other Democrat in the entire state who has any name recognition at all.”

In Illinois, the once venerable Republican Party has seen its influence wane, as the bedrock Republican suburbs of Chicago have turned a shade of purple, or even blue.

In recent election cycles, the GOP’s declining fortunes in Illinois have produced a “smaller and much more fiscally and socially conservative Republican Party,” said University of Illinois-Springfield political scientist Kent Redfield. While a fiscal conservative like businessman Bruce Rauner was able to win the Illinois governorship in 2014, a good year for the GOP, he had no hope of surviving a much stronger Democratic midterm wave four years later.

“For a Republican to win statewide in Illinois they need to be the right kind of Republican, and the current direction of the Republican Party makes it difficult for those kind of candidates to win in a primary,” Redfield said.

John Gregg, an Indiana Democrat who ran unsuccessfully for governor in both 2012 and 2016, said he faced several challenges in his bids.

“First, candidates must overcome a perception that the office is unwinnable,” he said. “Regardless of the candidate’s own personal experience, electoral record, and fundraising prowess, people too often make assumptions about a race before it is run. To make matters worse, in most of these places, the minority party doesn’t have a strong party infrastructure, enthusiasm, and optimism.”

A second factor, Gregg said, is the media. News outlets “can be somewhat dismissive because they want to follow the perceived winner. A candidate can propose detailed, well-thought-out policies and be ahead of the curve, but often there is no coverage. There are fewer and fewer local media outlets, and that is having a huge impact on a candidate’s ability to get a message out.”

Indeed, Gregg said, the demise of local news has left many voters to tune into national cable outlets, which focus on fights between the national parties. That increases polarization, he said.

“Candidates are consumed by perceptions about national issues and people, regardless of whether they share those viewpoints or not,” he said. “Tip O’Neill’s saying that all politics is local is no longer true. Now, all politics is national.”

Gregg has company. We came across skilled politicians in both parties whose aspirations have been stymied because of their party label.

In Hawaii, Republican Andria Tupola, the young former minority leader for the heavily Democratic state House, was an appealing candidate, said veteran Hawaii journalist Nancy Cook Lauer. In 2018, Tupola won the GOP gubernatorial primary with more than half the votes in a three-way race, but she was defeated with just a third of the vote against incumbent Democratic Gov. David Ige in the general election.

Such a wide loss, combined with the GOP’s weak bench in Hawaii, suggest “the improbability of a major renaissance in the near future” for the state Republican Party, Lauer said.

In Mississippi, Attorney General Jim Hood, a conservative Democrat, initially seemed to have a reasonable shot at beating a divisive Republican candidate, Tate Reeves, in the 2019 governor’s race. But Hood ended up losing by five points.

“If Hood could not win, I doubt that a Democrat will win a statewide office in Mississippi anytime soon,” said Tougaloo College political scientist Steve Rozman. “Hood had been the only Democrat to hold a statewide office in recent years, serving four terms as attorney general. Now, Democrats are completely shut out.”

Arguably the country’s starkest example of a partisan shut-out is California. There, the Republican Party that once produced Ronald Reagan, George Deukmejian, and Pete Wilson now ranks third behind the Democrats and non-aligned voters in party registration, and the last time a non-incumbent Republican was elected to one of California’s eight statewide constitutional offices was in 2006.

Thanks to the state’s top-two primary system, the California GOP is no longer even guaranteed to get a candidate into the general election. And even when they do, credentialed and polished candidates such as Carly Fiorina and Ashley Swearengin saw their candidacies flounder.

The California Republican Party “has no chance of electing a statewide candidate anytime in the near — or even the distant — future,” said longtime Democratic strategist Garry South.

Steve Poizner was a prototypical highly-qualified California candidate who lost due to his party affiliation, said Marcia Godwin, a professor of public administration at the University of La Verne.

“He was first elected as a Republican to the position of insurance commissioner and served for one term between 2007 and 2011,” she said. “He ran for the same office again in 2018, this time as an independent. He was the top vote-getter in the primary and received a large number of newspaper endorsements. But it was to no avail, as he lost to a Democratic state senator in the general election.”

The Democratic tide in California has been so strong that when Republican Paul Chabot lost congressional races in 2014 and 2016, he and his wife decided to move to Texas and start a relocation business for blue state conservatives who wanted to move to politically friendlier territory.

“We were fighting on our own in California,” Chabot told Canada’s CBC network. “We had no real Republican Party support. And what I realize now is most Republicans have given up on California.”

“We used to say the voters were smart about accountability — they picked Republican comptrollers when we had Democratic governors and vice versa,” he said. “No longer.”