Now that Rick Santorum has suspended his campaign, Mitt Romney has essentially wrapped up the Republican presidential nomination. Although Newt Gingrich and Ron Paul remain in the GOP race, Santorum was Romney’s last major opponent, having won 11 states in the Midwest, the South and elsewhere.

However, as shown in Chart 1, 19 states still have to vote. Some commentators have asked whether or not we may see a significant protest vote against Romney in these remaining contests. With evangelical-heavy states such as Texas and North Carolina on the docket, it could be considerable in some states.

The logic goes that if there is a sizable protest vote, it will suggest that the conservative base of the GOP is not rallying around the party’s presidential nominee. On the other hand, should Romney perform well, it may be an indication that the base has acquiesced in his candidacy. This caused us to wonder: how have past candidates performed after wrapping up their party’s nomination? And can this be a sign of things to come in the general election?

Since the modern primary process began in 1972, six party-nomination races with no incumbent have concluded before May (Romney’s apparently will be number seven). In saying that these contests had “concluded,” we mean that the candidate either won enough delegates to clinch the nomination or the last major opponent dropped out of the race. CQ Weekly put together a helpful list cataloging the dates when these candidates wrapped up their nominations; using this information, we took a look at the percentage of the overall vote the six candidates won in primaries after that date. The results are shown in Chart 2.

Chart 2: Post-nomination primary performance for non-incumbent candidates who effectively clinched nomination prior to May 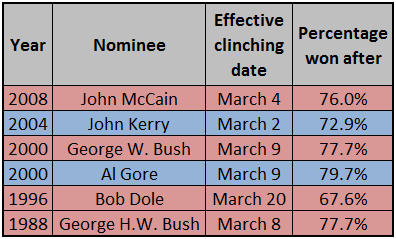 While there is no compelling trend for post-nomination primary performance and eventual general election outcomes, it is nonetheless true that Bob Dole, John Kerry and John McCain received the lowest percentages of the candidates who effectively clinched the nomination before May — and all three went on to lose in November. Al Gore actually had the best performance, but unlike the others, Gore only had to deal with one real opponent, Bill Bradley, making it simpler for him to win a large percentage of the vote once the race was effectively over. Therefore, it seems reasonable to conclude that a good performance for Romney would consist of his winning more than 70% of the vote in the remaining primaries, and the higher he goes, the better for his chances in November.

As we conclude, it is worth stressing that strong post-clinch primary performance should not be termed an essential element of general election victory. For one thing, the sample size we have here is quite small (only six candidates). In addition, each primary season and general election from 1988-2008 had its own unique circumstances. Perhaps paralleled by 2004 — when Kerry was able to count on Democratic antipathy to President Bush to enthuse Democrats — Mitt Romney has a not-so-secret weapon in 2012: manifest Republican dislike of President Obama. Even if the base remains lukewarm towards Romney’s candidacy in the next couple of months, it won’t necessarily be fatal for him. By the end of his convention, and certainly by the conclusion of the fall campaign, the GOP is likely to be quite united. Mitt Romney alone may not be able to bring together all the disparate forces in the Republican party, or to energize them, but President Obama can and probably will.