With five months to go until Election Day 2012, all indications are that the presidential race between Barack Obama and Mitt Romney is going to go down to the wire and that the outcome will ultimately be decided by voters in 10-15 battleground states in which neither candidate has a decisive advantage.

These findings raise an important question for the Obama and Romney campaigns. In deciding how to allocate money and other resources, how much emphasis should they give to mobilizing potential supporters versus persuading undecided voters? The answer to this question depends on the characteristics and political attitudes of two key groups of voters in the battleground states: unregistered supporters and undecided registered voters.

In order to compare the potential payoffs of a strategy emphasizing mobilization compared with a strategy emphasizing persuasion, I analyzed data from a March 20-26 Gallup Poll in 12 key battleground states: Colorado, Florida, Iowa, Michigan, Nevada, New Hampshire, New Mexico, North Carolina, Ohio, Pennsylvania, Virginia and Wisconsin. This was the most recent battleground state polling data available for analysis. A total of 1,046 adults were interviewed on landline and cellular telephones, including 871 registered voters.

Swing voters: Unhappy with Obama but unenthusiastic about voting

The March 20-26 survey was conducted at a time when Mitt Romney was still battling with Rick Santorum for the Republican nomination. Now that Romney has locked up the GOP nomination, Obama’s lead in these battleground states may very well be smaller. What is striking, however, is that as early as March, relatively few registered voters were unwilling to state a preference in a Romney-Obama contest. Even combining leaners with the undecided, swing voters made up less than 10% of the electorate in these 12 states.

Still, with the race between Obama and Romney expected to be very close, even a small group of swing voters could decide the outcome. So who are these swing voters? To answer this question, I compared the characteristics and political attitudes of swing voters (those who were undecided or only leaning toward a candidate) with the characteristics and attitudes of voters who were supporting either Obama or Romney. The results are displayed in Table 1.

Table 1: Who are the swing voters? 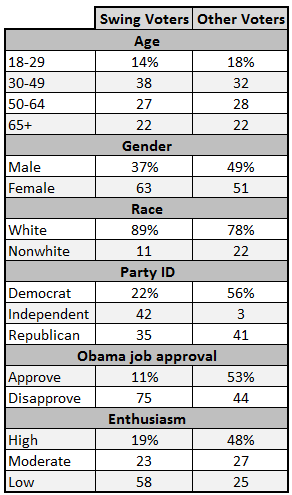 The data in Table 1 show that compared with voters supporting a candidate, swing voters were disproportionately white and female. They were also much more likely to describe themselves as completely independent and much less likely to describe themselves as Democrats or independents leaning toward the Democratic Party. But the most dramatic differences between swing voters and voters supporting a candidate involved their opinions about President Obama and their enthusiasm about voting in 2012.

These findings suggest two different conclusions about the likely results of efforts by the Obama and Romney campaigns to persuade swing voters to support their candidate. From the standpoint of the Obama campaign, efforts at persuading swing voters are likely to be unproductive and could even backfire. These voters have a decidedly negative view of the president and are very unlikely to vote for him. The best the Obama campaign can hope for is that most of these swing voters will not bother to turn out in November.

In contrast, the Romney campaign would appear to have a good chance of winning most of these swing voters over to their side by November based on their negative opinions about President Obama’s job performance. Such opinions are typically a very strong predictor of presidential voting decisions, especially when an incumbent president is running for reelection. The greater challenge for the Romney campaign may be getting these discontented swing voters to turn out given their very low enthusiasm about voting. This suggests that a strategy combining persuasion and mobilization may be needed.

The other unknown in the equation: unregistered voters

In addition to swing voters, there is another group in the electorate whose behavior has the potential to influence the outcome of a close presidential election — voters who are not currently registered. In fact, according to the Gallup battleground state poll, there were almost twice as many unregistered voters as undecided registered voters in these 12 states.

Table 2: Who are the unregistered voters?

These findings suggest that the Obama campaign would be well advised to focus its efforts in these 12 battleground states on voter registration and turnout. However, unregistered voters, like swing voters, tend to be rather unenthusiastic about voting. Getting them registered and to the polls could be challenging.

Despite the closeness of the presidential race, the Obama and Romney campaigns find themselves in very different strategic situations in the battleground states. For the Romney campaign, a strategy focused on persuading and mobilizing registered but undecided voters looks promising given the negative views of President Obama held by most swing voters. In contrast, for the Obama campaign, a strategy focused on mobilizing supporters who are not currently registered seems to hold more promise than one emphasizing persuasion of undecided voters.