UPDATE: The Crystal Ball‘s Geoffrey Skelley spoke with Paul Brandus of West Wing Report about this article. To hear the audio, click here.

Perhaps Pennsylvania Senate Majority Leader Dominic Pileggi (R) should be nicknamed the “The Electoral College Count von Count” for his different ways of trying to count electoral votes. Much like the Sesame Street character, his fixation on counting can be both grating (to not only his political enemies, but also some of his political friends) and instructive.

After his inability to push the Keystone State version of an electoral vote-by-congressional-district plan, Pileggi proposed a new bill that would proportionally allocate Pennsylvania’s electoral votes based on the statewide popular vote.

Democrats see the proposal as a ploy to game the system, and we also get the sense that many Republicans would just as soon let the issue of changing Electoral College allocations go away, given its potency as a rallying cry for Democrats. Any change to how electoral votes are allocated would make more sense if adopted nationally, as opposed to a piecemeal approach (that includes Maine and Nebraska, whose unique apportionment by congressional district gives ammo to those who wish to game the rules in other states).

But unlike the proposal to award electoral votes by congressional district — a plan that the Crystal Ball’s Alan Abramowitz found would have elected Mitt Romney in 2012 even though President Obama won the national popular vote by about 5 million votes — a proportional allocation system, used nationally, might track more closely to the national vote than the current system.

We will tackle what could happen if electoral votes were awarded proportionally in every state, but first an explanation is required to clarify just how the proportional system would work.

2) The remaining electoral votes (18 for Pennsylvania in 2012) are then divided among the candidates based on the proportion of the state’s popular vote each won, with the electoral vote total rounded up to the nearest whole number. That means, for instance, that 1.1 (or 1.001) is rounded up to 2, not to 1.

3) Should the rounded-up electoral vote total add up to more than the state’s total number of electors, “the number of presidential electors allocated to the nominee with the smallest percentage of the statewide popular vote shall be reduced by one.” This “subtraction phase” (as we’ll refer to it) is then repeated until the total is right, going from the last-place candidate to the second-place finisher. The first-place finisher in the state cannot have his or her total reduced in the subtraction phase.

Using Pennsylvania in 2012, let’s demonstrate how this would work. Overall, Obama won 52.0%, Romney won 46.6% and the remaining candidates each won less than 1% apiece. First, Obama gets two electoral votes for winning the state. Next, multiplying .520 by 18, we get 9.4, which when added to two gives Obama 11.4, which is then rounded up to 12 electoral votes based on the bill’s language. As for Romney, we multiply .466 by 18 and get 8.4, rounded up to nine electoral votes. But because 12 plus nine equals 21, we must reduce an electoral vote to get to Pennsylvania’s elector total of 20. So starting with the lowest finisher who has an electoral vote, we subtract one from Romney’s total, making the allocation Obama 12, Romney 8.

Now, what would 2012 have looked like nationally under this format? Chart 1 shows how the electoral votes would have been apportioned according to the proportional plan.

Note: The “O” or “R” in the “State winner” column signifies whether Obama or Romney won the state.

Challenges for a proportional system

But what are the other ramifications of this system? Most notably, it would significantly affect large states. The states with four electoral votes or less would have still ended up awarding all of their votes to the candidate who won their states.  For states with between five and 10 electoral votes, most would still award the vast majority of their electoral votes to the statewide winner, although the minority party would scrape away a few electoral votes in each state. However, this formula disproportionately influences the Electoral College results of more populous states. In 2012, Obama beat Romney 187-69 in states with 15 or more electoral votes (California, Florida, Georgia, Illinois, Michigan, New York, North Carolina, Ohio, Pennsylvania and Texas).  Under the Pennsylvania proportional system, Obama’s electoral margin of victory would have been narrowed to 143-112 (with Johnson winning one), which accounts for nearly all of the difference between the actual and proposed Electoral College results.

Chart 2: Relationship between state size and the proportion of electoral votes awarded to the state’s winner 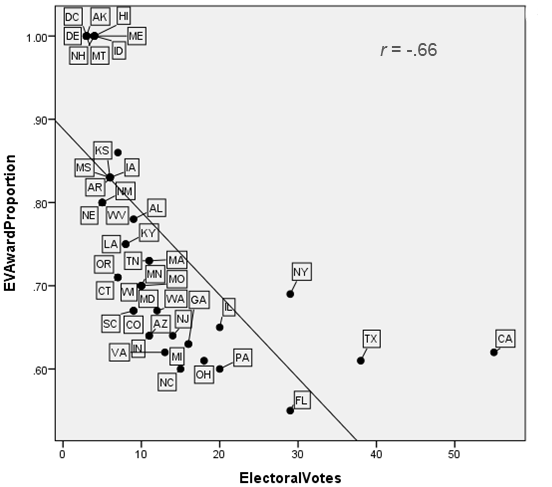 Note: Some state abbreviations are obscured on the chart.

Besides increasing the Electoral College’s small-state bias, a 50-state proportional system could cause considerable confusion. Take Texas in 1992, for instance. George H.W. Bush won the state with 40.6% of the vote, earning him two votes for winning the state and giving him an electoral vote proportion of 12.2. Added together, Bush would have had 14.2 or 15 electoral votes. Bill Clinton finished second with 37.1%, for 11.1 or 12 electoral votes. Ross Perot won 22.0% of the vote, for 6.6 or 7 electoral votes. However, the three candidates’ total electoral votes would have been 34, two more than the 32 that Texas had in 1992. In the subtraction phase, Perot and Clinton would lose a vote, leaving the state’s final total as Bush 15, Clinton 11, Perot 6. With only two major candidates, the system is still fairly clear, but with three or more significant vote-getters this format could prove relatively opaque to voters.

Refer back to the earlier example of Pennsylvania in 2012: Because of the rounding-up provision, technically 12 candidates would have an electoral vote (without even considering the write-in votes) before the subtraction phase. So if Obama’s portion in the Keystone State rounded up to 12, Romney’s to nine and the other 10 candidates to one apiece, we technically begin the subtraction phase for Pennsylvania at 31 electoral votes, needing to subtract off 11 to get to the state’s proper total of 20. In most cases, the third-party candidates would have their electoral votes removed — in Pennsylvania, only Obama and Romney would get votes in the end.

However, third parties in the United States would likely support such a system because it holds the potential for their candidates to win electoral votes, particularly in the bigger states. If we had operated under a proportional system in 2012, Gary Johnson would have won an electoral vote in California. Although it’s only one electoral vote, one is certainly better than none for minor parties. And we only have to look back to 1992, when Ross Perot ran his first campaign, to see the kind of impact it could have outside the two-party system. In real life, Perot netted zero electoral votes in 1992 despite winning 19% of the national popular vote; in a proportional system, he would have won 59, preventing anyone from getting to 270 electoral votes (Clinton would have only won 267), thereby throwing the election to the House of Representatives.

Applying the proportional format to some previous elections produces some interesting results, particularly in elections that featured more than two major candidates. Chart 3 below reviews some important elections and how they would have turned out under a proportional system versus what actually happened.

In the actual 1860, 1968 and 1992 elections, the plurality winner of the national popular vote won a majority in the Electoral College. But under the proportional rules, no candidate in those three elections would have won an Electoral College majority, automatically throwing the election to the House of Representatives to decide, which hasn’t happened in nearly 200 years. The 1992 case would have been relatively straightforward: Democrats controlled a sizable majority of state delegations in the House (an absolute majority of the state delegations is required to produce a president — each state gets one vote), meaning Bill Clinton would have been the likely winner in a House vote. But in 1860, it’s essentially impossible to game out how the House would’ve decided the election given the threat of secession and the North-South split in the Democratic Party; perhaps the nation would have added deadlock to dissolution. In 1968, Democrats controlled 26 of the 50 state delegations in the House so it’s possible that Hubert Humphrey might have won the House vote. However, five of those majority Democratic delegations were from states that George Wallace won — might Richard Nixon have made some kind of deal with the Wallace forces to get their support in the vote? Would some southern Democrats have simply chosen to vote for Nixon instead of Humphrey? And how would the five states with an even number of Republican and Democratic representatives have voted if no candidate could reach a majority?*

Ultimately, it seems unlikely that any changes to the Electoral College will happen anywhere. But it’s worthwhile — and fascinating — to examine the possible repercussions of such proposals. More than anything, by laying out how a plan would have altered the 2012 election (and previous contests) we can better understand that no matter what is proposed, a “perfect” system for apportioning electoral votes to perfectly match the national sentiment as expressed by the national popular vote probably does not exist within the Electoral College framework. Most reforms have unintended consequences — while the current system has its faults, a new one might simply create more opportunities for instability and chaos.

*Granted, if these elections had been contested under the proportional system, the candidates might have run different campaigns than they would have under the winner-take-all-system.