There are a lot of fishy things going on in the presidential race.

An incumbent president’s approval rating is historically a good indicator of how he will do on Election Day. By this measurement, President Obama should be in decent shape: according to the RealClearPolitics average from mid-day Wednesday, Obama’s approval rating was 49.8%; that average includes polls taken of all adults (the bigger pool of people that includes non-voters), as well as likely voters (a smaller pool). And yet, the president is running more than two points behind his approval in the average of national horse race polls — at mid-day Wednesday, he stood at 47.2%, to Mitt Romney’s 47.8%.

Meanwhile, Romney actually has taken the lead over Obama on “favorability.” Romney’s net favorability — the gap between the people who say they have a favorable view of him versus those who have an unfavorable view — is two points higher than Obama, although both men have roughly the same “favorable” ratings: 49.7% for the president and 49.3% for the challenger. On Oct. 3, the day of the first debate, Obama’s net favorability was 6.6 points higher than Romney’s. The changing opinions are almost certainly related to the first debate, and while Obama won the last two debates on points, his aggressiveness toward Romney might have had a cost in favorability, even as his approval rating has stayed close to 50%.

We mention all this just to note the conflicting signals in this very close contest.

So here’s a reminder of where we see the race now: 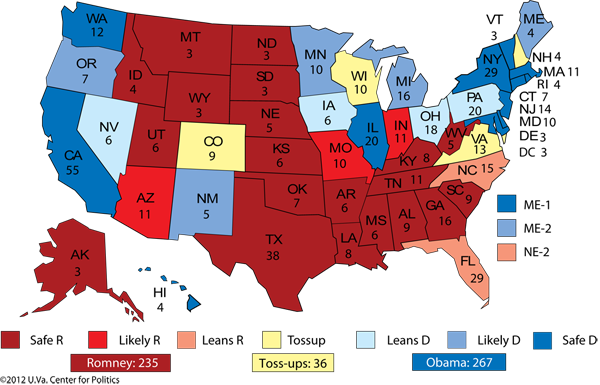 And here’s what we think we know about the battlegrounds:

— Nevada appears to be moving toward the president; Democrats are very well organized there and public polling, which has shown Obama with a small lead, is noted in Nevada for understating Democratic performance. Early voting in the key swing county of Washoe (Reno) is close, although it appears that Democrats have such a huge advantage in heavily populated Clark County (Las Vegas) that it might be difficult for Republicans to overcome in the rest of the state.

— Virginia, meanwhile, might be tilting toward Romney, but only by a hair. On a good day, Romney appears to be up a point or two in his own campaign’s private polling, and the public polling is dead even. Rumors of Virginia’s demise as a swing state are highly exaggerated; it exists in a different place than Florida, a state that very well might be close but that leans more toward Romney in our ratings.

— Democrats historically have an early voting advantage in Iowa, which we still have in the leans Democratic column, but it’s hard to see Democrats banking quite the early advantage they won there in 2008. In 2000, Al Gore won Iowa by less than half a percentage point; George W. Bush won it four years later by less than a point. Another photo finish is not out of the question.

— The same may be true of Wisconsin, which like Iowa has been a decent bet for Democratic presidential candidates in recent years, although Gore and John Kerry each won Wisconsin by less than half a point. Obama has a slightly bigger lead here in public polling than he does in Iowa and Ohio, which might make our rating of it as a toss-up seem counter-intuitive. The trustworthy Marquette Law School Poll, though, shows the race as basically a tie, 49%-48% Obama, and Wisconsin’s political volatility over the cycle along with Paul Ryan’s spot on the Republican ticket might make it a special case. Obama probably has a fingernail’s worth of advantage here — and likely in New Hampshire too — akin to Romney’s potentially minuscule advantage in Colorado and Virginia.

— Pennsylvania and Michigan remain teases for the Republicans. So are Minnesota and Oregon, which are other states mentioned as potential surprises, along with Maine’s Second Congressional District. If the race breaks very late and very big for Romney, he could capture one or more of them. But none of these are likely to provide him with a decisive, 270th electoral vote. North Carolina probably belongs in the same category for Obama, as does a longer long-shot: Arizona.

— Finally: Ohio. We just have not seen indications as of yet that Obama has lost his small lead in the Buckeye State, although Romney is clearly doing better than he was before the first debate. We’re always looking for parallels to previous elections, so how about this one: 1976. That year, Jimmy Carter built a big lead over incumbent President Gerald Ford — much bigger than Obama’s pre-debate edge — only to see that lead slip away during the campaign. That year, Carter won Ohio by less than three-tenths of a percentage point, while a liberal Senate candidate, Democrat Howard Metzenbaum, defeated Republican Sen. Robert Taft by three points. Given that a liberal senator in Metzenbaum’s mold, Democrat Sherrod Brown, looks likely to run ahead of his party’s presidential candidate, it wouldn’t surprise us if we saw a similar outcome this year. The truth is that the Midwestern battlegrounds of Iowa, Ohio and Wisconsin could still go either way.

Next Thursday, we fully intend to call all the states in the Electoral College. But it’s also possible that a state or two will be so close that, even a few days before the election, we won’t be confident enough in the outcome to make a call. For instance, back in 2000, the Crystal Ball called all the states save one: Florida, and said the election would come down to the Sunshine State. It turned out that our caution was justified. We won’t hesitate to do the same again.

A soft Democratic edge in the Senate

We also plan to call all the remaining Senate races before Election Day. We’re comfortable moving one of six toss-ups now, though: Connecticut. It appears that Rep. Chris Murphy (D) is pulling away from Republican businesswoman and 2010 nominee Linda McMahon; McMahon has run a spirited race, but this was always an uphill climb for her. Murphy now leads by 3.1 percentage points in the RealClearPolitics average, and Connecticut’s Democratic lean is hurting McMahon in much the same way that Massachusetts’ Democratic preference is hurting Sen. Scott Brown (R). Massachusetts and Connecticut prove that campaigns can be more about terrain than candidates.

Our remaining toss-ups are also about terrain, as three of the five races are being contested in states that Romney almost certainly will win: Arizona, Indiana and North Dakota. In the end, it’s going to be difficult to pick against the three Republican candidates running in those states, although Indiana state Treasurer Richard Mourdock (R) is doing everything he can to give Dick Lugar’s (R) Senate seat to Rep. Joe Donnelly (D). Mourdock had a Todd Akin moment on Tuesday night with an utterly foolish comment: “Life is that gift from God. I think that even when life begins in that horrible situation of rape, that it is something God intended to happen.” This comes just a few days after Romney cut an ad endorsing Mourdock. Meanwhile, Democrat Richard Carmona appears to be at least neck and neck with Rep. Jeff Flake (R) in Arizona, while perhaps Rep. Rick Berg (R) has a narrow lead over Heidi Heitkamp (D) in North Dakota. We’re not comfortable moving any of these three races out of the toss-up category at this point.

The same goes for the two other toss-ups, Nevada and Wisconsin, which are being fought in two battleground states. It’s possible that Obama victories in either state won’t be enough to elect Rep. Tammy Baldwin (D-WI) or Rep. Shelley Berkley (D-NV), while Romney victories in either place would almost assuredly elect appointed Sen. Dean Heller (R-NV) and ex-Gov. Tommy Thompson (R-WI).

Our Senate count is now 51-44 Democrats, but we are NOT comfortable calling the Senate for the Democrats. There is just too much uncertainty. It’s possible that some of the candidates we now favor, such as Democrats Tim Kaine in Virginia, Sherrod Brown in Ohio, Bob Casey in Pennsylvania and Murphy and Warren in Connecticut and Massachusetts, respectively, won’t actually make it across the finish line.

However, Democrats do retain a clear edge in the battle for control of the Senate with less than two weeks to go before Election Day.