— There have been nearly 200 presidential primary debates since 1948.

— Almost all of them have been held in the last four decades.

— Although Democrats have a record-breaking primary field, they do not appear likely to break the record for the number of candidates appearing on a stage at once, 11, set by Republicans last cycle.

— No incumbent president has participated in a primary debate, and Donald Trump seems likely to continue that trend.

The race for the 2020 Democratic presidential nomination has been going on for months (and it feels like years). Yet in some ways the battle only begins tonight with the first televised debate.

The specifics of this first round of debates on the Democratic side are historically novel. While there have been debates on back-to-back dates in a nomination campaign, this is the first time that two totally different slates of candidates will debate each other. The Democratic National Committee opted to use a drawing to determine the 10 candidates who will debate tonight and the 10 who will debate tomorrow. Four years ago, and in the midst of a field that was very large (although not as large as this two-dozen member field), Republicans opted to hold double-header debates in the pre-primary season, with the lower-polling candidates participating in a so-called undercard debate before the better-polling candidates debated at the main event.

The DNC has sanctioned up to 12 debates, although the total number of discrete debates will almost certainly be larger than that because the first debate, happening tonight and tomorrow, really counts as two debates, not one. Or at least that’s how we’re counting them as part of our updated history of presidential primary debates. We debuted this history four years ago and have updated it, adding all of the 2016 primary debates.

Including both the undercard and main event debates from the 2016 Republican race, plus the Democratic debates featuring, most notably, Hillary Clinton and Bernie Sanders that cycle, there have now been 92 Republican primary debates and 104 Democratic bouts since 1948, when the first modern presidential primary debate was held. That Democratic total will grow by four this month and next, as the party is set to hold back-to-back debates tonight and tomorrow in Miami and then July 30-31 in Detroit. Presumably, the back-to-backs will become unnecessary at some point as the DNC ratchets up the polling and donor thresholds for inclusion (as it has done for debates in September and October).

The full history is included in Tables 1 and 2 at the end of this article. But first of all, here are some quick observations. For more trends from history, see our piece from four years ago, when we first released this historical background on presidential primary debates.

While we count 196 debates in modern presidential primary history, almost all of these have come within the last four decades. Prior to 1980, Republicans held just one debate, in 1948 (more on that below), while Democrats held 11 in the 1950s, 1960s, and 1970s. That means that 94% of all presidential primary debates have been held just since 1980. Figure 1 shows the trend. 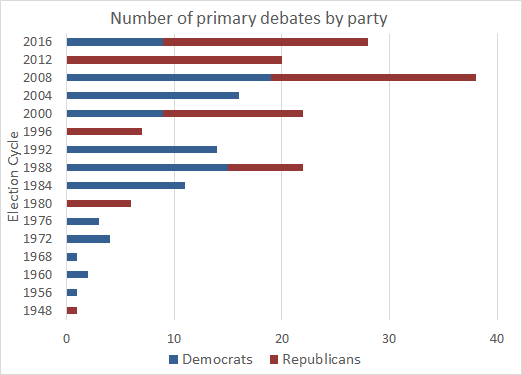 It may not be a coincidence that the rise of presidential primary debates has come in the post-primary reform era. Following the chaotic and explosive 1968 Democratic primary, when Vice President Hubert Humphrey won the Democratic nomination despite not competing in the primaries, both parties eventually reformed their processes to give voters significantly more say in who the presidential nominees would be. Debates therefore became more important because presidential nominations were being decided by a portion of the larger electorate as opposed to party insiders.

At this point, the parties seem petrified of showing any preference toward any of the candidates; this cycle, the Democrats have opted for polling and donor thresholds to determine who gets to appear in debates.

That has led to some candidate inclusions, and exclusions, that never would’ve happened in a political era where party elites held and exercised more sway over such decisions. For instance, self-help guru Marianne Williamson, who had to retreat from peddling anti-vaccination twaddle just last week, made the first Democratic debate while Gov. Steve Bullock (D-MT), a late primary entrant who nonetheless has a long history of statewide electoral success in a state that votes Republican at the presidential level, couldn’t even get in. Something seems off to us about that. Would it not be reasonable for parties to figure out a way to prioritize candidates with prior service to the party as opposed to total outsiders? The same can be said about Trump and the Republicans, but Trump’s immediate polling success would’ve made excluding him from the debates in 2015 unreasonable (practically speaking, neither Williamson nor Bullock has demonstrated any meaningful support in polls — nor have many of the other candidates who will be on one of the debate stages).

In any event, the prevalence of primary debates is a somewhat new feature of the primary process, at least if one looks at the long history of presidential nominations. And the parties having to hold multiple debates at once to accommodate gigantic fields is even newer, as the Republicans in 2016 were the first party that really had to grapple with that problem. It’s easy to nitpick the process the GOP chose, or the Democrats are using now, but in fairness there is not much of a roadmap for either party to deal with such a problem.

Prior to 2016, the maximum number of candidates that appeared on any primary debate stage was 10, set by Republicans in the 1996 and 2008 cycles and Democrats in the 2004 cycle. However, the Republicans actually had a debate with 11 candidates in September 2015. Of course, Republicans had more than 11 presidential candidates total: The GOP roster included 17 candidates at its numerical peak. It’s just that the GOP forced the worst-polling candidates to compete in the “undercard” debate prior to the main event.

Figure 2: How many candidates participate? 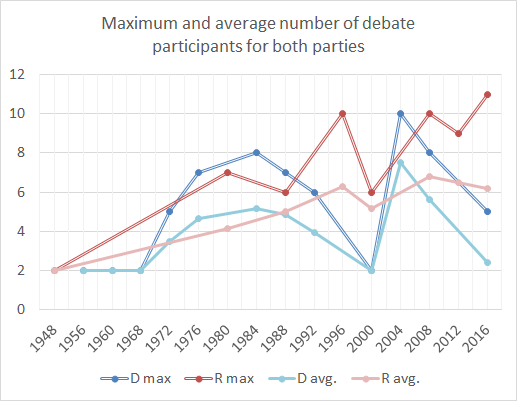 Democrats have even more candidates this time: now 25 with the recent addition of former Rep. Joe Sestak of Pennsylvania. But the DNC is limiting each debate to 10 total participants, with 20 slots over two nights. One wonders if, later in the process, whether the DNC might allow a larger debate stage in order to consolidate two nights of debates into one. But for the time being, the GOP’s debate-stage participant record of 2016 appears safe even as Democrats are breaking records with their total number of presidential aspirants.

3. A single-issue debate would not be unprecedented

Gov. Jay Inslee (D-WA) is emphasizing climate change and has proposed having a debate entirely focused on the subject. A strong majority of the other Democratic candidates agree with him, but Democratic National Committee Chairman Tom Perez has nixed the idea.
Whatever the merits of a single-issue debate, there is historical precedent for it — indeed, the very first presidential primary debate that we counted in our history was a single-issue debate.

Republican presidential candidates Gov. Thomas Dewey (R-NY) and former Gov. Harold Stassen (R-MN) held the first modern debate in 1948. The debate, conducted over radio in advance of the Oregon primary, focused on a single question: whether the Communist Party should be outlawed in the United States (Dewey said no, Stassen said yes). Dewey, previously the 1944 Republican nominee, won the nomination again in 1948, losing in a famous upset to President Harry Truman in November.

While the Democrats are going to hold, in all likelihood, more than a dozen total debates thanks to the back-to-back events starting tonight, there almost certainly will not be any Republican primary debates. The Republican National Committee disbanded its debate committee last year, an unmistakable sign that the party has no interest in sanctioning a debate featuring President Donald Trump and any potential challengers.

A president not participating in a primary debate would be in keeping with history: No sitting president has appeared in a primary debate, even ones who ended up facing significant primary challenges (Gerald Ford in 1976, Jimmy Carter in 1980, and George H.W. Bush in 1992).

If and when a sitting president has a prominent intraparty challenge, we suspect that incumbent will face intense pressure to participate in a debate, as debates have become so clearly part of the presidential primary fabric. But the last three incumbents who ran for reelection (Bill Clinton in 1996, George W. Bush in 2004, and Barack Obama in 2012) did not face such pressure because they didn’t have any real primary opposition. As of now, Trump’s only opponent is a gadfly candidate, former Gov. William Weld (R-MA), who most recently was Gary Johnson’s running mate on the 2016 Libertarian Party ticket.

Since 1972, every non-incumbent major party presidential nominee has appeared in a primary debate, and many of these nominees participated in all or nearly all of the contests included on our list.

However, frontrunners do occasionally skip early debates. Ronald Reagan passed on an Iowa debate in 1980 only to see George H.W. Bush beat him in the caucuses there (Reagan recovered and won). George W. Bush passed on the first few debates in the 2000 cycle but ended up steamrolling to the nomination, despite his landslide loss to Sen. John McCain (R-AZ) in New Hampshire.

In late January 2016, Trump skipped a pre-Iowa debate as part of a feud with then-Fox News host Megyn Kelly, who was part of the moderator team for the debate. Trump would lose Iowa to Sen. Ted Cruz (R-TX). Is it possible that skipping the debate hurt Trump in Iowa? Potentially: He was leading in polls before losing to Cruz, although it’s hard to know what role the debate played in that result, if any. Trump would go on to win the nomination anyway.

It seems certain that the eventual Democratic nominee either will be on the debate stage Wednesday or Thursday night, or will be on a future debate stage. That this point we’re making seems so blindingly obvious is a testament to how ingrained debates have become to the nomination process.

Tables 1 and 2 list all of the presidential primary debates we have found over the years. More information about how we created this list is included in the notes below the tables.

Notes: For debates from 1948-2000, we used lists from The Primary Decision: A Functional Analysis of Debates in Presidential Primaries and In Pursuit of the White House 2000: How We Choose Our Presidential Nominees. For debates from 2004 through 2016, we used The American Presidency Project at UC Santa Barbara and our own research. Particularly for more recent cycles, we made some judgment calls about which debates to include or exclude; generally, if the debate was televised and included at least some of the leading candidates, we included it on our list. If you believe we are missing a debate or have other comments or questions about how we built this list, please e-mail us at goodpolitics@virginia.edu. Taylor Hardin, an Alabama state official, stood in for Gov. George Wallace (D-AL) during a 1972 Democratic debate. In the 2016 cycle, Republicans used a two-tiered system in which lower-polling candidates participated in a debate immediately before the debate featuring the better-polling candidates. We included both types of debates in our tally, marked above as “undercard” for the earlier debate and “main” for the later one to differentiate them.

Sources: The American Presidency Project at UC Santa Barbara; The Primary Decision: A Functional Analysis of Debates in Presidential Primaries; In Pursuit of the White House 2000: How We Choose Our Presidential Nominees; Crystal Ball research. Our former colleague, Geoffrey Skelley, contributed heavily to this research when we first compiled it back in 2015.