Last week, Senate Republicans blocked action on the Freedom to Vote Act. By way of background, this legislation would enact automatic voter registration, set federal standards for early and mail-in voting, place constraints on the partisan drawing of congressional districts, known as “gerrymandering,” and make Election Day a national holiday, among other measures.

Democrats say that federal legislation is needed to counter efforts in Republican-controlled states that would impose new restrictions to make it harder for Americans — especially people of color — to vote. Republicans counter with their viewpoint that the proposed federal legislation would amount to a federal takeover of elections. Republicans view themselves as a group whose actions would make it easier for those who are legally qualified to vote and at the same time prevent voter fraud, while viewing what the Democrats are attempting as a power grab.

Our research finds that there is majority support for aspects of the Freedom to Vote Act. More than 5 in 10 of those who voted in the 2020 election strongly favor the expansion of access to voting in elections and ending congressional district “gerrymandering” practices. And 40% strongly favor the creation of automatic voter registration across the country.

A disconnect certainly exists. To uncover what drives these starkly different positions, we ran an analysis amongst 2020 Biden and Trump voters to identify and understand the underlying attitudes and opinions that associate most closely with responses to these and other voting rights questions. As our next release will show, the why behind the numbers: Donald Trump.

Figure 1: Percentage who strongly support aspects of the Freedom to Vote Act 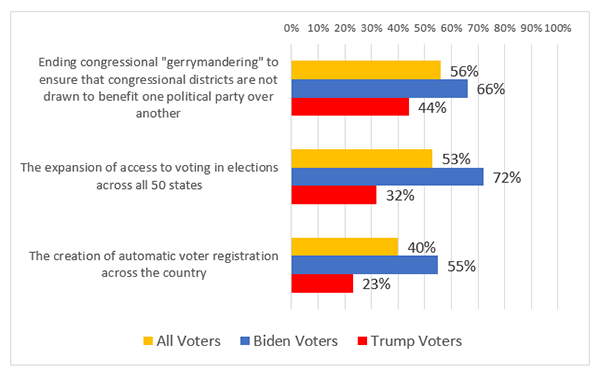