— Whereas Biden voters are animated by racial and social justice concerns, Trump voters fear they will suffer personally, socially, culturally, and economically from the effects of immigration. (see Tables 2 and 3 below)

— These conflicted attitudes yield major policy divisions. When asked which policy areas concern them most, Biden voters identify with combatting systemic racism and addressing racial diversity. Whereas Biden voters prioritize social justice concerns, Trump voters do not. In fact, across the almost 50 national issues and areas of personal concern surveyed (some of which are noted below), Trump voters are far and away primarily focused on one particular issue: immigration. (see Table 4 below)

— Cluster analysis reveals that while many voters are essentially closed off to direct appeals to compromise at this time in part because of their strong views on immigration, there are voters who are concerned about immigration but are also potentially more persuadable on this topic. They are open to messaging and policies that balance their interests with those of immigrants, helping them feel more safe and secure.

Immigration and the national divide

American racial and ethnic politics have reached their breaking point. On the one side, Joe Biden voters see systemic racism in America as a serious problem. They agree that immigrants face substantial discrimination in today’s America. They believe that white Americans have advantages over people of color.

Donald Trump voters are on the other side of Biden voters on each of these issues, and by large margins. They believe that Christian faith is an essential part of American greatness, and that it is under attack in America today. By large margins, they worry that discrimination against whites will increase significantly in the next few years. And Trump voters are much more likely to express concerns and worries about illegal immigration than Biden voters.

Table 1 shows some differences between Trump and Biden voters on issues such as racial discrimination and the importance of Christianity in American life.

Table 1: Biden/Trump voter opinions on matters of race and faith 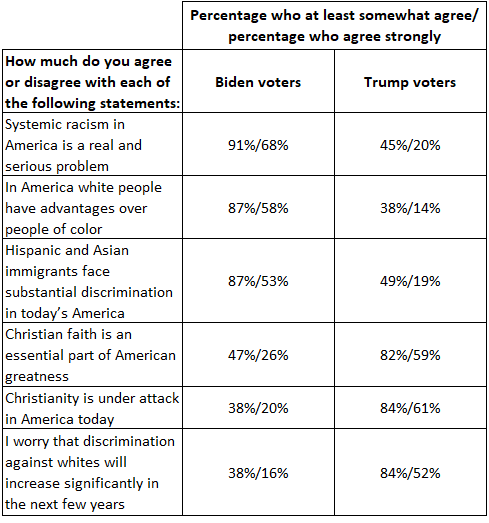 Biden voters are more likely to doubt the importance of Christianity in their own conception of American greatness and are more concerned about discrimination against minorities. Meanwhile, Trump voters are more likely to believe in the importance of Christianity and are concerned about discrimination against white Americans.

Table 2 shows some related findings about the threats that Biden and Trump voters perceive from illegal immigration. 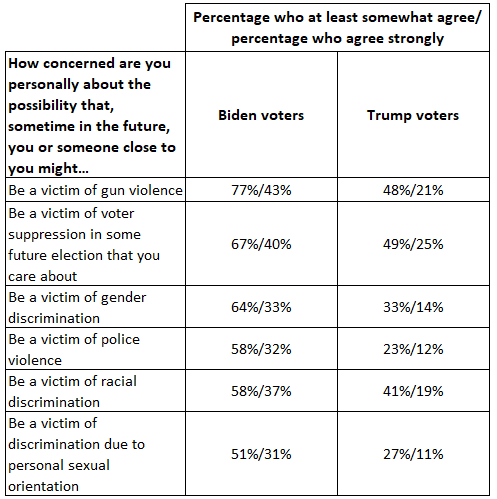 For Trump voters the problem as they see it is clear — they fear they will suffer personally, socially, culturally, and economically from the effects of immigration.

Trump voters also express greater concern that they or someone close to them will be a victim of violent crime (71%/41%) or domestic terrorism (71%/39%) due to illegal immigration, and they are concerned that increased immigration will result in they or someone close to them suffering personally from American cultural change (71%/40%) or discrimination against white people (67%/40%).

In sum, Trump voters are deeply and personally animated by a strong anti-immigration sentiment that unites their thinking across previously distinct and separate policy areas.

These conflicted attitudes yield major policy divisions. When asked which policy areas concern them most, Biden voters identify with combatting systematic racism and addressing racial diversity. These include reducing racial bias and economic and wealth inequality, reducing police violence against all citizens and minorities, and protecting the rights of immigrants and women as well as gay and transgender people.

Whereas Biden voters prioritize social justice concerns, Trump voters do not. In fact, across almost 50 national issues and areas of personal concern surveyed — a sample of which is listed in Table 4 below — it is immigration that emerges as one of the top issues on which Trump voters are focused. Close to 9 in 10 Trump voters surveyed — 86% — are concerned about reducing illegal immigration. Only 39% say they are concerned with protecting the rights of immigrants, and 85% are concerned about preventing voting by people who are not legally qualified to vote. 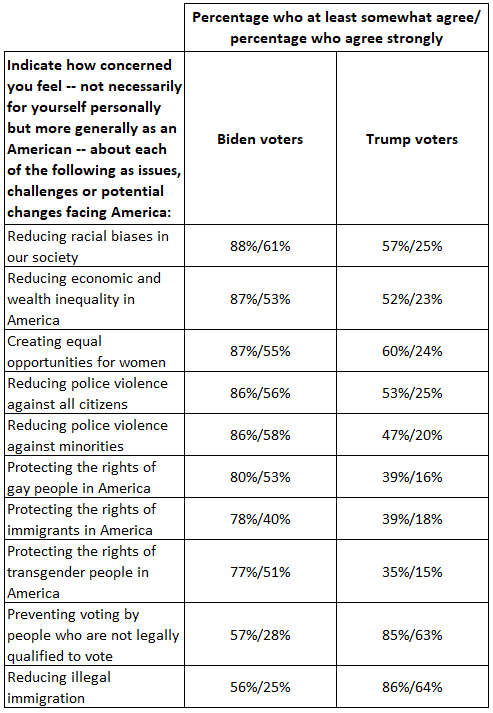 These findings reveal the outsized role immigration plays in fueling our national divide. While majorities of Biden voters favor social justice policies for those they view as oppressed and discriminated against, this focus does not necessarily translate into wholesale policy positions — from taxes to employment to the cost of housing, and so on.

On the other hand, Trump voters have identified a common threat — immigrants and those who support them. For them, immigration splits the country and amplifies broader concerns. More to the point, immigration presents as an expansive and expanding conflict accelerator that sits at the fulcrum of our deep, wide, and dangerous national divide.

The overarching goal of Project Home Fire is to uncover pathways to effective compromise. By employing the tools of modern behavioral science, we look to identify compromise receptive subgroups that exist among Biden and Trump voters (what we call compromise clusters) and the pathways for influencing them (what we call compromise corridors). This approach lends itself to a landscape view that investigates a wide array of potential compromise clusters and compromise corridors across many policy areas to identify the best potential paths forward. It can also be focused on a particularly important area to jumpstart progress there. Immigration presents as an opportunity to do just that. Below we highlight some of our initial findings.

To learn what different subgroups of voters exist based on different immigration-related concerns, Project Home Fire carried out a cluster analysis based on Biden and Trump voter responses to the immigration concerns questions highlighted above. This analysis identifies, on one hand, voters for whom immigration does not greatly color their beliefs about other issues like taxes, employment security, and cultural change. On the other hand, we see subgroups of highly immigration-concerned voters for whom fears about immigration strongly affect their opinions on such other issues that we have previously tended to think of as areas of opinion that are separate and distinct from immigration. For that latter very immigration-concerned subgroup of voters, any conversation toward compromise on immigration policies is likely a nonstarter.

Our initial analysis suggests that 56% of the electorate profile as unpersuadable on immigration and cultural matters at this time. Trump voters make up a significantly larger portion of this group (67%, vs. 33% of Biden voters). Overall, these voters are a mix of urban, suburban, and rural traditionalists more prone to self-report as evangelical Christians. They frequently watch conservative news channels, distrust mass media, and believe that some extreme left media should be censored. They agree strongly with the idea that old-fashioned ways and old-fashioned values still show the best way to live. They are likelier to be married without children and employed full time. They adhere strongly to the ideas that it’s smart to be wary of people who are ethnically and culturally different from themselves, that some moral beliefs are sacred and should never be questioned, and that there are many radical, immoral people trying to ruin things who should be stopped. They do not support pushing for group equality.

On the other hand, 16% of the electorate identify as compromise cluster swing groups on the topic of immigration. These voters skew female. The group features a variety of ethnic/racial groups and are balanced between younger (less than 50 years of age) and older (50 or over) voters, either married or single, with children living with them, employed full time, living in suburban/urban areas, and who say that most of their Facebook friends are Democrats. We might call this group “Concerned Moms.” There also are some in this group who tend to be white and older, with grown children and grandchildren, retired, and suburban/rural who say that most of their Facebook friends are Republicans. We think of this group as “Tax Conscious Seniors.” They are more prone to disagree with the sentiment that it’s smart to be wary of people ethnically or culturally different than themselves, and also that it’s important for children to be self-reliant and considerate. They support pushing for group equality. By 2:1, they break for Biden (66%).

There is a “base” compromise cluster group (17% of the electorate) for whom immigration fears are not a defining factor. These are almost exclusively Biden voters (89%). Finally, there is a “reach” compromise cluster group (11%) where we can identify areas to start a conversation, but they set up as the toughest group to persuade in the short term.

On a parallel path, we ran an analysis using relationships between these immigration questions to empirically group them into broader underlying immigration themes. Four such themes emerged:

— Cultural change. Fear of suffering personally from American cultural change due to an increase in immigration features most heavily here, followed by fear of the United States becoming more socialist and fear of white discrimination due to increased immigration.

— Negative employment effects. This includes fear of immigration creating an inability to get a higher paying job, keep the job one has, or keep the pay one gets for the job they do at its current level.

For swing groups open to compromise on this issue, immigration does not set up as an “all or nothing” issue. These voters are concerned about immigration but are also more persuadable on this topic. They are looking for policies that balance their interests with those of immigrants, helping them feel more safe and secure.

For example, relative to the Tax Conscious Seniors, Concerned Moms are significantly less fearful of the negative effects of immigration. Compared to the base group of voters for whom immigration is a non-issue, these Concerned Moms are worried about higher housing costs, taxes, and potential negative employment effects due to immigration. They need to feel that creating pathways and opportunities for immigrants won’t disadvantage them. They present as open to messaging and policies that balance continued progress on immigration with safeguarding and protecting the interests of themselves and their children.

Tax Conscious Seniors prioritize economic concerns — specifically, higher taxes — above all else. They see too much immigration as running up welfare, health care, and education costs, driving up the amount of taxes they pay. They worry that if things continue on what they see as the current trajectory, America will become more socialist. They see rising housing costs as the next domino to fall. They are prone to be older and retired voters, for whom the compromise-reinforcing goal is to engage them in a discussion that moves them from uncertainty to stability, and then to security and reassurance that they will not slip backwards through no fault of their own because of immigration.

For those who wish to foster compromise between Biden and Trump voters, focusing on these sorts of messages may be a way to start a conversation and reduce the heat surrounding the immigration issue. But these two groups of voters also have significantly different opinions not only on immigration but also on the other racial and cultural issues described above, and so much more.

This view into immigration initially suggests how such fostering of compromise might be approached. In future releases we will focus more intentionally on the highest potential pathways and people for starting the broader conversation our country needs if we are to elevate compromise over conflict to address America’s problems and restore common ground.