— The sheer size of Kemp’s win paired with Secretary of State Brad Raffensperger’s (R-GA) renomination represents the biggest Republican electoral rebuke to Trump since he left the White House.

Asked about his weak polling in advance of his primary challenge to Gov. Brian Kemp (R-GA), former Sen. David Perdue (R-GA) said that he might lose, “but I can damn guarantee you that we are not down 30 points.” Quite right. He was down by a lot more than that.

Kemp crushed Perdue 74%-22% in the Georgia gubernatorial primary on Tuesday night. The incumbent actually did better in this primary (73.7%) than he did in his 2018 Republican primary runoff (69.5%), meaning he did better with former President Trump actively opposing him this time than he did 4 years ago with Trump’s strong support. Granted, Kemp is the incumbent now, and other than not going along with Trump’s complaints about the integrity of the 2020 election, Kemp has done little to upset conservatives. It showed in the vote. Perdue, meanwhile, ran a listless, backward-looking campaign.

The more surprising result was that Secretary of State Brad Raffensperger (R) also won renomination, avoiding a runoff with Trump-backed Rep. Jody Hice (R, GA-10). In the aftermath of the 2020 election, Raffensperger drew Trump’s ire because he did not accede to the then-president’s demands to “find” sufficient votes to overturn Joe Biden’s victory in Georgia. Kemp, since then, signed several pieces of conservative legislation into law, perhaps boosting his standing with GOP partisans — this was a luxury Raffensperger did not have.

Still, the seemingly embattled secretary of state was able to earn enough votes to secure an outright primary victory. As Map 1 shows, Raffensperger carried most of the state’s counties — the ones he lost were mostly within or near Hice’s 10th District. 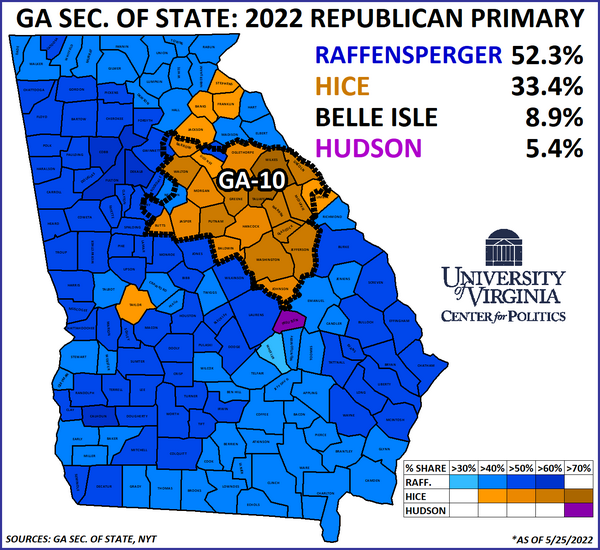 Raffensperger may have benefited from crossover voting by Democrats: An Atlanta Journal-Constitution analysis estimated that “about 7% of voters in this year’s Republican primary previously cast ballots in the Democratic primary in 2020.” So there were tens of thousands of Democratic 2020 primary voters who voted Republican this time (we’ll see what the final number ends up being). Raffensperger won a little over 52% of the vote, and was around 27,000 raw votes or so above the 50% cutoff line for a runoff. Now, we don’t know how these 2020 Democratic primary voters voted in this primary — some may have backed Hice in the hopes he would be a weaker general election opponent. It is also fair to say that some of these voters may not really be Democrats at all and just voted in the 2020 Democratic presidential primary because it was more competitive last time (in Georgia, voters can pick whichever ballot they want in a primary and can vote for different parties in different years — the state does not have formal registration by party). Another complication is that if no 2020 Democratic primary voters had participated in the 2022 Republican primary, the total number of votes cast would be lower, meaning that the 50% runoff threshold that Raffensperger had to clear also would have been lower.

However, anecdotal and other evidence from observers suggests that at least some and perhaps many of these previous Democratic primary voters followed the action to the GOP side and wanted to vote against Trump’s picks (there was no real competition for the Democratic gubernatorial and Senate nominations). A more sophisticated analysis will be merited here once we get the final number of crossover voters, but the possibility of Democratic voters potentially getting Raffensperger over the 50% mark is an interesting one to consider — a few weeks ago, Crystal Ball Senior Columnist Louis Jacobson explored the potential of strategic voting in primaries. Raffensperger clearly outpaced Hice with actual Republicans, as Hice only got about a third of the vote (the remainder went to other candidates) — it’s just a question of whether he would have avoided a runoff without votes from 2020 Democratic primary voters.

It also seems like Hice just ran a bad race, too. As the Journal-Constitution noted, “he hoarded his cash expecting a runoff, which was a very bad bet in the end.”

Overall, voters cast close to 1.2 million Republican ballots and a little more than 700,000 Democratic ballots in the Georgia primary (tallies were not entirely complete as of this writing). Even considering the caveats (at least some crossover voting by Democrats and higher-profile races on the Republican side), this was another example of higher Republican primary engagement in a primary held this year, which supports our overall belief that Republicans are more enthusiastic about voting this year (as one would expect of an opposition party in a midterm).

It seems safe to say that the Tuesday night results served as the biggest rebuke to Trump from a Republican electorate since he left the White House, although we wouldn’t necessarily draw any huge conclusions from a single primary. Still, the former president’s gubernatorial endorsement scorecard has taken some other hits over the last few weeks: He backed losing gubernatorial candidates in Nebraska (Charles Herbster) and Idaho (Janice McGeachin), too.

With his primary behind him, we see Kemp as a favorite for the fall, and we are moving our rating in the gubernatorial race from Toss-up to Leans Republican.

Following his dominating win, Kemp has less work to do to pull his party together for the general election. To the extent he needs to shore up his base support, Kemp has a good foil in Democratic nominee Stacey Abrams, whom he defeated in a bitter 2018 race that Abrams did not formally concede, even as she acknowledged Kemp as the next governor (Abrams and other Democrats suggest that voter suppression cost them that race, but they have not provided definitive evidence in support of that claim). Abrams and her partner at the top of the ticket, Sen. Raphael Warnock (D-GA), are strong campaigners who will galvanize Democrats, to the extent they can be galvanized in what appears to be a trying political environment.

It is true that incumbent governors do occasionally lose in otherwise strong environments for their party. Probably the most notable recent example was then-Gov. Tom Corbett (R-PA), who lost by 10 points to now-Gov. Tom Wolf (D-PA) in the midst of what was an otherwise outstanding environment for Republicans in the 2014 cycle. But Corbett had dreadful approval ratings and other problems. Kemp, on the other hand, is in much stronger shape — if he had big problems, he wouldn’t have crushed Perdue by such a lopsided margin. Abrams likely had a better chance in 2018 — a Democratic-leaning environment — then she does now.

In the Republican Senate primary, former NFL star Herschel Walker (R) cruised to an easy victory, even as his Republican opponents warned that the first-time candidate may not be ready for primetime against Warnock because of several controversies involving both his personal life and business ventures. We’re curious to see what happens now that the general election has begun. Certainly, Republicans have a golden opportunity to win back this seat, which Republicans lost in a 2021 runoff, but we would be more confident in their chances if they had a more proven and better vetted candidate (maybe we would even rate the race Leans Republican). As it is, this race remains a Toss-up for us, but our rating change in the governor’s race makes clear that of the 2 top incumbents running in Georgia this year, the Republican, Kemp, is better positioned than the Democrat, Warnock.

One state over, Alabama is Safe Republican in its gubernatorial and Senate races, but it saw some notable statewide primaries.

Gov. Kay Ivey (R-AL), who assumed office in 2017, is seeking a second full term. Her main opposition came from Lynda Blanchard, who served as ambassador to Slovenia under Trump, and Tim James, the son of ex-Gov. Fob James. But there did not seem to be much of appetite for replacing Ivey — in her ads, she criticized the Biden administration, while playing up her own record. That proved to be a winning combination, as she won outright, although she had to work to do so.

The contest for Alabama’s open Senate seat will head to a runoff. Katie Britt (R), a former chief of staff to outgoing Sen. Richard Shelby (R-AL), led the field with 45% — an impressive showing, considering most public polling had her in the 30s, but less than the required majority. Rep. Mo Brooks (R, AL-5) finished a distant second place, with 29%, while U.S. Army veteran Mike Durant, who surged earlier this year, but seemed to stall out, took 23%. Although Durant has said he’d endorse Brooks in the runoff, Britt would seem the favorite given her impressive first-round showing — notably, she ran about even with Brooks in his own district. Trump had previously endorsed Brooks but later rescinded that endorsement.

As with Alabama, much of the action in deep red Arkansas was on the Republican side. Sarah Huckabee Sanders, who served as Trump’s press secretary while he was in office, won the GOP nomination with over 80% of the vote. She enters the general election as a heavy favorite to win the office that her father held from 1996 until 2007.

Sen. John Boozman (R-AR) was renominated with just under 60%. First-time candidate Jake Bequette was the beneficiary of some outside spending, but finished in second place, with 21%. In November, Boozman is on track to make history, as the first ever Razorback Republican to win 3 terms in the Senate.

Finally, in the Lone Star State, the marquee primary of the night was in the 28th District, where veteran Blue Dog Rep. Henry Cuellar found himself in a third bout over 2 cycles with progressive challenger Jessica Cisneros. In the 2020 primary, Cuellar won 52%-48%. Cisneros ran again in this year’s primary, in March, and held Cuellar to a 49%-47% margin, thus forcing a runoff. Last night’s result was the closest (and most regionalized) of their 3 matches.

In the runoff, Cuellar pointed to his support from House Democratic leadership, while Sen. Bernie Sanders (I-VT) made a late stop in San Antonio on behalf of Cisneros. In late January (shortly before the primary) Cuellar’s home was raided by the FBI, which may have ultimately helped push his share under the critical 50% mark. The status of that investigation remains unclear. Finally, a major issue in the campaign was abortion: Cuellar is the last remaining anti-abortion rights Democrat in the House, and Cisneros used that issue to cast him as the “Joe Manchin of the House.”

As of Wednesday morning, Cuellar had a lead of just 177 votes. Though Cisneros improved her showing in the San Antonio area — in the Bexar County portion of the district, she took 86%, up from 73% in the primary — Cuellar put up some similarly lopsided margins in the counties along the Mexican border. Although Cuellar claimed victory, the race remained uncalled as of this writing.

We think Cuellar would be a stronger general election candidate because he has cultivated a personal brand that seems to sell well in the Republican-trending parts of the district, although the specter of the FBI investigation remains. But for now, we are holding TX-28 at its current Toss-up rating. The winner of the runoff will face Cassy Garcia (R), a former aide to Sen. Ted Cruz (R-TX), in the general election.