Mitt Romney’s selection of Paul Ryan hasn’t appeared to have had much of a polling impact nationally — at least not yet — but it has seemed to move the needle in Ryan’s home state of Wisconsin.

Four Wisconsin polls have come out since the Ryan selection, and they average just a 1.25 percentage point lead for Barack Obama. That’s comparable to other states rightfully called toss-ups, so for the first time in this election cycle, we’re adding a toss-up state. Wisconsin is shifted from leans Democratic to toss-up, joining Colorado, Florida, Iowa, Nevada, New Hampshire, Ohio and Virginia. That leaves 237 electoral votes leaning, likely or safe for President Obama, 206 leaning, likely or safe for Mitt Romney and 95 in the toss-up category.

Based on its Democratic history and the historically minor effect that running mates seem to have in their home states, we have resisted the Wisconsin change. But we go where the data take us, and for now, that’s to toss-up. 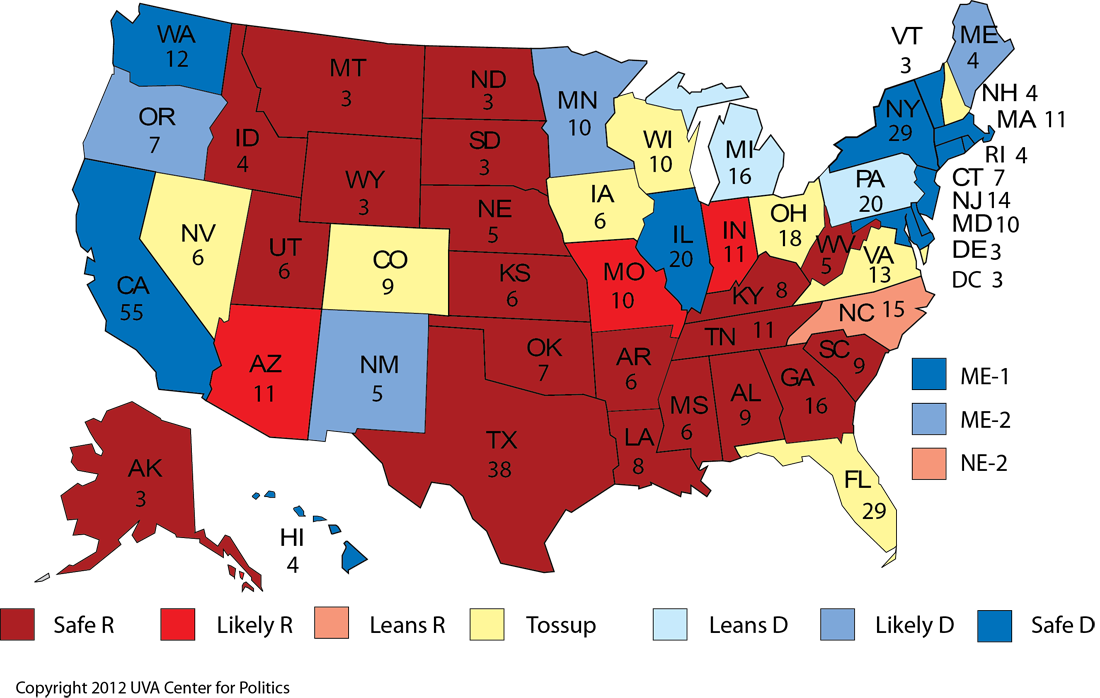 After the Missouri Senate primary on Aug. 7, it looked like anyone could beat Sen. Claire McCaskill, D-MO. That list included Rep. Todd Akin, the Republican who surprisingly won the GOP primary.

Now? We’re not “legitimately” sure, so we’re switching the race back into the toss-up category.

Akin, of course, made the gaffe of all gaffes this campaign season (so far) when, over the weekend, he asserted that women’s bodies can prevent pregnancies in the event of “legitimate rape.” The operative word being used to describe Akin’s comments — including by many Republicans — has been “reprehensible.” Such an adjective is richly deserved in Akin’s case, although “stupid” fits just as well.

A deadline for Akin to withdraw from the race came and went Tuesday afternoon, although the embattled congressman and member of the Armed Services, Budget and (gulp) Science committees technically has until Sept. 25 to exit the ballot, though he would need a court order to do so and he would be on the hook to replace any printed ballots with his name on them. (We’d bet that this is one check the National Republican Senatorial Committee would happily cut.)

The political press tends to overstate the importance of gaffes, although the decision by numerous top Republicans — including Mitt Romney — to call on Akin to leave the race certainly undercuts their own nominee if he continues. Such is the risk of their power play to get him to exit, although it also shows how fearful they are of the negative national press Akin’s comments are generating. What Akin said is so outrageous that the story seems to have taken on some national relevance. Republicans worry about the gender gap: Going back to 1972, Republicans have never done better with women than they have with men in a presidential race, according to exit polls (although there was no gender gap in 1976). Republicans will lose women again this time, but the margins matter, and Akin, in his own small way, doesn’t help the GOP in that regard. (Romney will almost assuredly win men after Obama won them by a point in 2008.)

As for Akin hurting Romney in Missouri, we wouldn’t bet on it. There’s not much good evidence from history of a down-ticket candidate hurting a presidential nominee at the top of the ticket. If Akin ultimately does make it to November, we would expect an under-vote for Akin — as in, a significant number of Romney voters simply won’t vote in the Senate race, or at least not for Akin or McCaskill. That might allow McCaskill to slip by, or perhaps the vote for the Libertarian candidate and write-ins would grow in the Senate race, letting McCaskill win with a plurality. But a lousy Senate candidate shouldn’t hurt Romney much in a state that John McCain won.

Moving Missouri back to the toss-up column means that Republicans would hold a 48-47 majority in the Senate if all senators not up for reelection return and all the other races this year continue along their current trajectory. That leaves Florida, Massachusetts, Missouri, Montana and Virginia as the decisive states in the Senate: Democrats currently hold four of the five, and they need to continue to hold four of those five to maintain a certain Senate majority.