— This suggests that pollsters have adjusted their sampling and weighting procedures to correct for some of the problems that occurred in 2016 in light of the 2016 results.

— However, the election is still five months away.

A swing state edge for Biden, at least for now

The winner of the 2020 presidential election will be determined not by who wins the national popular vote but by who wins the most electoral votes in around a dozen states in which the outcome remains in doubt. In 2016, Donald Trump lost the national popular vote by just over two percentage points but won a majority of electoral votes because he won most of the electoral votes in these swing states. In this article, I examine how Trump is doing in the same swing states in 2020 against the presumptive Democratic nominee, Joseph Biden.

I define swing states as those in which the margin separating Donald Trump and Hillary Clinton in 2016 was under six percentage points. Given the high degree of consistency in the outcomes of recent presidential elections from one election to the next, this seems like a reasonable standard. It yields a set of 13 states with a total of 163 electoral votes that could potentially be competitive in 2020: Arizona, Colorado, Florida, Georgia, Maine, Michigan, Minnesota, North Carolina, New Hampshire, Nevada, Pennsylvania, Virginia, and Wisconsin.

In 2016, Donald Trump carried seven of these 13 states, winning 50.2% of the major party vote to 49.8% for Hillary Clinton. However, Trump won 118 electoral votes from these states to only 45 for Clinton. Trump’s decisive margin in the Electoral College from the swing states reflected very narrow victories in three states with large blocs of electoral votes: Florida, Pennsylvania, and Michigan.

So how is President Trump doing in 2020 in these swing states? Table 1 compares the final polling margin for Hillary Clinton in 2016 and the actual vote margin for Clinton with the average polling margin for Biden in polls conducted during April and May and compiled by 270towin.com. Only one poll per polling organization was included in each state’s average. For Maine, the only poll available was conducted in March. The number of polls used to compute the state averages ranged from one to eight and is shown in Table 1.

I included the final average polling margin for each state in 2016 from RealClearPolitics in order to compare the current polling averages with the final 2016 polling averages as well as the actual 2016 results. In nine of these 13 states, the final polling average overestimated the Clinton margin. In three states won by Trump — Wisconsin, Pennsylvania, and Michigan — the final polls predicted a Clinton victory. In one state won by Clinton — Nevada — the final polls predicted a Trump victory. Despite these misses, on average the polls were not too far off the mark in the swing states. Across all 13 states, the final 2016 polls had Clinton leading Trump by an average of 1.6 points. Her actual average margin was 0.2 points.[1] 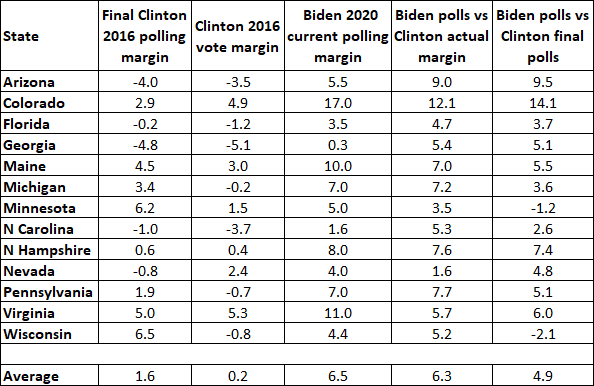 The data displayed in Table 1 show that, based on recent polling, Joe Biden is substantially outperforming both Hillary Clinton’s actual vote margin and her final polling margin in these 13 states. Biden is currently leading Trump in all 13 states by margins ranging from 0.3 points in Georgia to 17 points in Colorado. On average, Biden is running more than six points ahead of Clinton’s 2016 margin in the polls.

Of course, the election is still more than five months away and a lot could change between now and November. The recent polls in several states including Florida, Georgia, and North Carolina, show a very tight race. However, if these polls turn out to accurately predict the final results, Biden would win all 163 electoral votes from these 13 states with the possible exception of one electoral vote from the Second Congressional District of Maine.[2]

Not only is Joe Biden doing considerably better in recent swing state polls than Hillary Clinton did in these states in the 2016 election, but he is also doing considerably better than she did in the final polls in these states. In fact, Biden’s recent polling is better than Clinton’s final poll results in 11 of these 13 states, with Minnesota and Wisconsin the only exceptions. On average, Biden is polling almost five points ahead of Clinton’s final poll results in terms of margin.

Recent polling in 13 swing states shows a consistent advantage for the presumptive Democratic challenger, Joseph Biden, over the current Republican incumbent, Donald Trump. Biden leads Trump in all 13 states, although his margin in five states is less than five points. In several of these states, the final 2016 polling overestimated Hillary Clinton’s support. However, Biden is also doing considerably better in the polls than Clinton did in the final 2016 polls in these swing states.

[1] This is different from the total vote margin for the 13 states because it does not reflect the number of votes in each state.