— San Diego County, once a linchpin of the GOP’s Golden State coalition, now votes reliably Democratic, like most other counties with large populations.

— It’s rare that former members of Congress switch districts to primary incumbents, but political realignment in San Diego has facilitated such a scenario in CA-50, where former Rep. Darrell Issa (R) is attempting a comeback against damaged incumbent Rep. Duncan Hunter (R).

— Democrats’ chances at flipping CA-50 will depend largely on which Republican makes the runoff.

For most of us, America’s Finest City, San Diego, is known for its agreeable climate, world-famous zoo, and picturesque parks. Travel a few miles east, however, and political junkies will find a game of congressional musical chairs developing.

In the inland-based 50th District, Rep. Duncan Hunter (R) finds himself in the throes of a criminal trial stemming from alleged misuse of campaign funds. Hunter’s name is well-known in the area; in 1980, his father was elected to Congress as part of the Reagan Revolution before handing off his seat to his son in 2008. Though the younger Hunter’s ethical troubles surfaced in 2017, he still managed to win reelection the next year, thanks to the red lean of his district. Looking to 2020, if the incumbent moves ahead with reelection, his heftiest challenge will be beating out fellow Republicans.

Last week, former Rep. Darrell Issa (R, CA-49) announced he’d challenge Hunter in CA-50. As Issa represented the neighboring district for 18 years, this move creates something of a unique situation. It’s not especially uncommon for ex-members to go district-shopping, but it’s rare for them to do so while trying to primary an incumbent, aside from redistricting-generated scenarios that create member vs. member matchups.

During Barack Obama’s presidency, Issa was one of the administration’s most vocal critics in Congress; chairing the House Oversight Committee, he was best known for his highly-visible investigations. In the Trump era, his hold on a once-secure seat waned; Hillary Clinton carried his 49th District by eight percentage points, and Issa himself won with just 50.3%. Rather than run in a potentially hostile Trump midterm, Issa retired and Democrats went on to flip his seat by 13 points (Map 1): 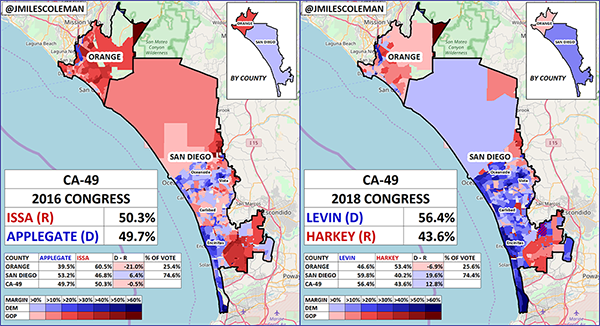 A second prominent Republican running in the district is former San Diego City Councilman Carl DeMaio. Like Issa, DeMaio ran in a swingier district before looking to CA-50. After losing the San Diego mayoral race in 2012, DeMaio ran against Rep. Scott Peters (D) in the 52nd District. That district takes in much of San Diego proper, and DeMaio lost by a three-point margin in 2014.

While its northern neighbor, Orange County, has gotten more attention — perhaps rightfully so, given its congressional turnover in 2018 — San Diego County has seen similar effects as a result of electoral realignment. This trend has helped induce the unusual scenario in CA-50.

For most of its time transitioning from a U.S. Naval hub to a highly populous county, San Diego voted Republican. In the 15 elections spanning from the end of World War II to the George W. Bush presidency, the county voted Democratic just once, when Bill Clinton squeaked out a 37% plurality in 1992. California’s last non-celebrity GOP Governor, Pete Wilson, served as San Diego mayor, before using the region as his base in his statewide runs from 1982 to 1994. In what is one of the Republicans’ last vestiges of strength there, of the top 10 largest cities in America, San Diego is the only one to have a GOP mayor.

California’s last two gubernatorial elections produced similar overall results — Gov. Gavin Newsom (D) took 62%, up slightly from ex-Gov. Jerry Brown’s (D) 60% — but blue movement was evident in the San Diego-area districts (Map 2). Newsom flipped Issa’s CA-49, getting 51.5%, up from Brown’s 45%. CA-52, which nearly elected DeMaio in 2014, is a considerably less attractive target for the GOP these days; Newsom carried it by nearly 17%, after it was within 5% in 2014. Given this shift, it makes sense that big-name Republicans would prefer running against a damaged incumbent for the area’s only safe seat, as opposed to trying to win the area’s other districts, which are all now Democratic and getting more Democratic. 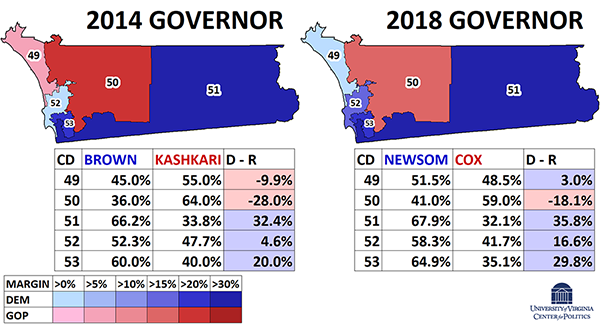 Given his name recognition in the area, ability to self-fund, and the incumbent’s legal troubles, Issa seems to be in a better position than most former House members who have tried to primary incumbents. Looking at a recent sampling of former members who have attempted comebacks against sitting members, a few themes emerge: they’re generally more common on the GOP side and in the South. They also haven’t ended well for some former members in recent years.

In California’s jungle primary system, the top two finishers in the primary, regardless of party, will advance to a runoff. Last year, statewide Democratic candidates got between 40%-44% of the vote in CA-50. Their only announced candidate here is their 2018 nominee, Ammar Campa-Najjar, meaning his spot in a runoff looks relatively secure. If Hunter finishes second, a runoff may look like 2018, where he nearly lost, running significantly behind other state Republicans (Map 3). Either Issa or DeMaio, who lack the incumbent’s ethical baggage, would seem to be safer bets for the GOP. Since the dynamics of the runoff largely hinge on which Republican makes the race with Campa-Najjar, Likely Republican remains a suitable race rating for now. 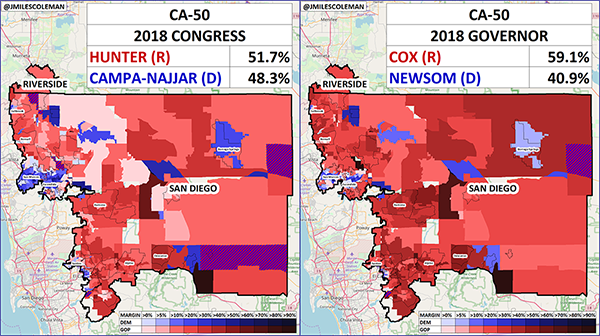 This week, two other races have made news that share aspects of CA-50’s plotline.

In upstate New York, Buffalo-area Rep. Chris Collins (R, NY-27) resigned to plead guilty in an insider trading trial, which will force a special election. Hunter and Collins were among President Trump’s first congressional supporters during the 2016 primary season. Both also won reelection in 2018 despite their ethical troubles; Collins won by less than half a point, while Gov. Andrew Cuomo (D) took just 34% in this seat. The Democrats’ 2018 nominee, Nate McMurray, is running again; without a damaged GOP incumbent, Democrats will have a harder time flipping this Trump +24 seat. Still, given the volatility that can come with special elections, we’re keeping NY-27 at Likely Republican.

In Texas, we have evidence that Issa-esque district shopping may be in vogue. Former Rep. Pete Sessions (R, TX-32) is expected to launch a bid for the Waco-based 17th District. Sessions represented the Dallas area for 22 years, eventually becoming chairman of the National Republican Congressional Committee. In last year’s blue wave, though, he was defeated in his suburban 32nd District. If Sessions wins the primary, he’ll find a much friendlier electorate in the more rural 17th; last year, Sen. Ted Cruz (R) carried TX-17 by 10% but lost TX-32 by 11%. While Sessions’ comeback bid should be interesting to follow, and will provide political junkies with another data point, it doesn’t impact our current ratings: TX-17 is Safe Republican while TX-32 remains Likely Democratic.