Modern presidential election campaigns generate a massive amount of news. This has never been more true than for this year’s campaign, an especially intense open-seat election campaign conducted with the parties near parity, with both an electorate and party system highly polarized, and with a pair of highly controversial and generally not-well-thought-of contenders. Every twist and turn, real and imagined, is reported and exhaustingly scrutinized. Even dedicated political junkies may feel overwhelmed by the hourly onslaught of election information as the political world churns.

The truth is that the vast amount of information pouring out of campaigns and developed by campaign watchers is of little or no consequence to the election’s outcome. It is noise — distracting and sometimes interesting noise, but nonetheless noise. In this din of information, the important aspects of the elections are often lost or overshadowed. This is where election forecasting models can help refocus attention on what matters, what the election may truly hinge on, what the campaigns may want to work on, and what we should expect in November when the votes are counted.

The modern era of election forecasting began in the mid-1980s. Since then, the number of models has grown (including those outside of academia). Experience has led to some models being tinkered with, some significantly revised, and others junked. Every model is different, but all are based on statistical analyses of how different pre-campaign contexts (“the fundamentals”) have translated into the two-party popular vote divisions in past presidential elections. Each forecast indicates what we should expect the vote to be. None expects perfection. The models themselves are imperfect. They use imperfect data. And then, apart from campaign effects that might be expected by the election’s context, some unexpected developments always make a difference. On occasion, some campaign news is not merely noise. Though imperfect and though accuracy varies from one model to the next and one election to the next, the models overall were quite accurate last time out. In the 2012 election, four of the forecasts were within one percentage point of the vote and another three were within two points.

Beginning in 1996, most of the major political science forecasting models’ predictions have been presented as a group at the American Political Science Association’s national meeting and then published in a journal symposium. PS: Political Science and Politics has been the home to the models since 2004. This year the forecasts were also released on the Crystal Ball. This year’s collection includes nine forecasts of the national two-party popular vote (plus a piece combining different types of forecasts indicating a Clinton win and another reporting a state-level model indicating a dead-heat).

So what do the nine forecasts tell us to expect this year? The range is from a modest Trump victory to a modest Clinton victory, no more than 52.5% to 47.5% either way. Only two of the nine foresee a Trump win. Helmut Norpoth (Stony Brook) combines an early party unity index with an electoral cycle component (a second party-term favors continuity, beyond that favors change) to predict 47.5% for Clinton. Alan Abramowitz (Emory) combines presidential approval, second quarter GDP change, and a “time for a change” party-term index. His model predicts a 48.6% Clinton vote, although he has said that he does not expect his model to be correct this year because of Trump’s candidacy.

Seven of the nine forecasts tilt to Clinton. Based on prospective personal financial outlooks and the number of in-party terms, Brad Lockerbie (East Carolina) sees Clinton with a razor-thin edge (50.4%). Reviving the presidential approval and GNP model from the mid-1980s, Mike Lewis-Beck (Iowa) and Charles Tien (CUNY) expect a 51.1% Clinton vote. My two forecast models land in nearly the same spot. They combine early preference polls (before or around Labor Day) with the second quarter real GDP growth rate. One uses pre-convention polls and the net convention bump and the second uses Labor Day polls. They predict 51% Clinton (51.2% and 50.7%, respectively). Bob Erikson (Columbia) and Chris Wlezien (Texas) use polls before and after the conventions along with an index of leading economic indicators. Their forecasts: 52% Clinton (51.8% in the pre-convention version and 52.0% in the post). Finally, Tom Holbrook (Wisconsin-Milwaukee), using Labor Day polls and an index of national conditions, sets the likely Clinton vote at 52.5%.

Overall, the forecasts see Clinton with a narrow edge. Beyond that, they suggest that the economy and voter fatigue with the in-party are Clinton’s major liabilities, and her opponent may be her biggest asset. Five of the nine forecasts include preference polls, the electorate’s early intentions about the choice between Trump and Clinton. All five tilt to Clinton. Of the four without a preference poll component, two go to Trump, one is a near dead-heat, and only one gives a slim edge to Clinton. The strategic implications are clear for the weeks ahead, most importantly for the upcoming debates. Clinton needs to make the election about Trump and Trump needs to encourage voters to think about their choice retrospectively, to focus on the perceived inability of the in-party to set the nation on the right track to peace and prosperity. 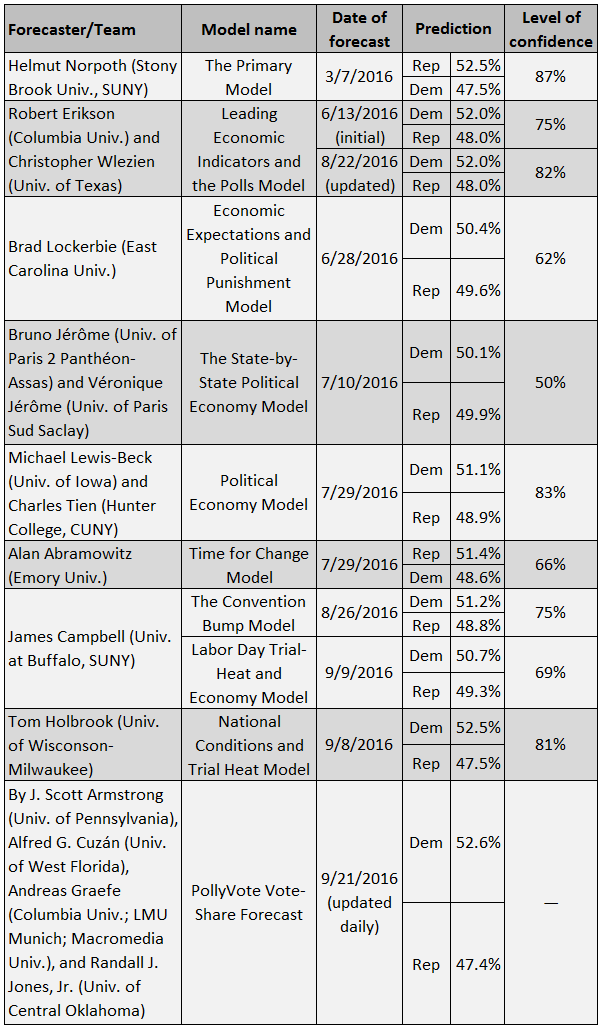 Note: The Crystal Ball did not run a summary of Tom Holbrook’s forecasting model in its series on electoral forecasting.