— Both Edwards and Jones won statewide races despite each carrying only a single congressional district apiece.

For political junkies, the main event of last weekend’s Bayou State festivities was the closely fought gubernatorial runoff, where Gov. John Bel Edwards (D) held on against wealthy businessman Eddie Rispone (R). The president invested substantial political capital in this race, notably holding three campaign rallies in the state since October. Coming on the heels of a rebuff in Kentucky’s gubernatorial contest earlier this month, where he rallied for the now-ousted Gov. Matt Bevin (R), the pair of races, taken together, show the limitations of the president’s endorsement. Still, while these gubernatorial contests are certainly setbacks for the president in the short-term, the Crystal Ball keeps both Kentucky and Louisiana safely in the red column for him in 2020.

The contours of Edwards’ triumph line up strikingly well with Sen. Doug Jones’ (D) upset win in the 2017 Alabama special election over former state Supreme Court Chief Justice Roy Moore (R), an extraordinarily weak candidate. To Edwards’ delight, his beloved Louisiana State University Tigers beat the University of Alabama Crimson Tide in Tuscaloosa, AL a couple of weeks ago in college football’s game of the year, but the Louisiana governor’s playbook looked a lot like the Alabama senator’s.

Both Jones and Edwards were able to energize the black electorate in their states to a level that is uncommonly intense in the post-Obama political landscape. Breaking down both their races by congressional district, a prominent feature stands out: they won statewide despite each carrying just a single congressional district apiece. 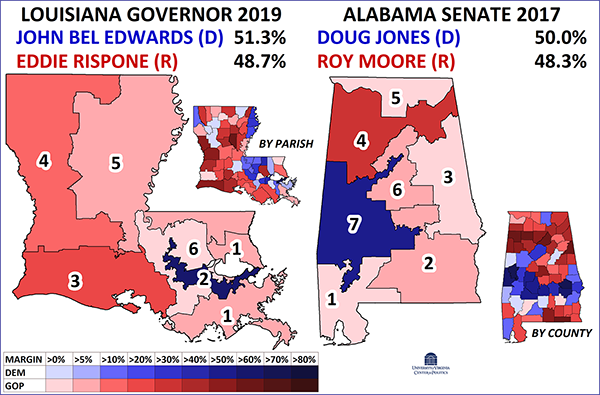 In Louisiana, Edwards carried the Second Congressional District, running from New Orleans to Baton Rouge, with an overwhelming 85%. Jones put up a similarly strong 80% in Alabama’s Seventh Congressional District, which includes parts of Birmingham and Montgomery. Both LA-2 and AL-7 are majority-minority and were the sole districts in their states to support Hillary Clinton in 2016.

The turnout data also shows a similarity between the races: in both states, the Sixth Congressional Districts cast the most votes (Table 1).

Aside from their shared moniker, the districts are demographically comparable — LA-6 is centered on suburban Baton Rouge while much of AL-6 comes from suburban Birmingham. White, wealthy suburbanites are the demographic that Democrats have made the deepest inroads with in the Trump era, so it’s logical that these districts would see relatively high voter engagement. LA-6 was Edwards’ best Republican-held district: He came within three points of carrying it, and, while Jones took just 45% in AL-6, it was a major upgrade from the punishing 26% that Clinton received there.

Conversely, looking at each state’s Fourth Congressional Districts, voter turnout suggested that both Moore and Rispone inspired cool reactions in GOP base regions. AL-4, which covers a wide rural swath of the state’s north, supported Moore by a hefty 38%, but cast the fewest votes of any district. Facing a presidential electorate, it’s unlikely Jones will benefit from this turnout dynamic, which factors into the Crystal Ball’s Leans Republican rating for the Alabama Senate race coming up next year. Days prior to the Louisiana runoff, the president held a rally in the Shreveport area, which sits in LA-4. Not only did LA-4 cast the fewest votes in the state, but the precinct where Trump held his rally actually flipped to Edwards.

Given the nature of his opposition and the hardening of 2016’s electoral fault lines, Edwards was not in a position to replicate the 56% he received in 2015 against then-Sen. David Vitter (R), a weak GOP nominee. At the precinct level, the state nearly uniformly swung red in between the elections, but the movement lined up well with what observers of national politics have come to expect (Map 2). 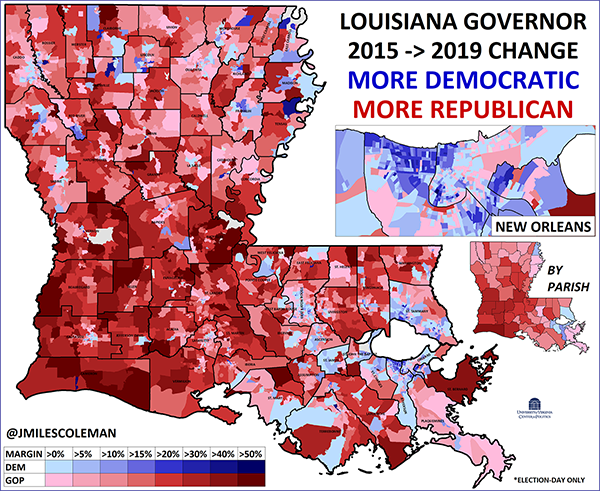 In the southwestern corner of the state, Cameron Parish moved hardest against Edwards; after taking 49% in 2015, he was down to 25% on Saturday. Such acute shifts to the right were common throughout Acadiana — a heavily blue-collar region where cultural issues and the national Democrats’ perceived hostility to the oil industry likely contributed to the shift.

Edwards’ gains from 2015 came primarily in the New Orleans metro; Jefferson Parish was especially salient. One of the most striking features of the governor’s coalition was east Jefferson Parish, which includes the large suburban community of Metairie. Among the first areas in the state to vote consistently GOP, it’s produced national figures such as Rep. Steve Scalise (R, LA-1) and Vitter, Edwards’ 2015 opponent. On Saturday, Edwards essentially tied Rispone in east Jefferson, losing it by just 73 votes.

It’s easy to gloss over Orleans Parish, as it’s so safely Democratic, but its vote also was informative. Outside of a few swampy precincts in the eastern part of the parish, Edwards carried every precinct there, gaining several from 2015. In New Orleans’ wealthy Uptown neighborhood, the precinct that houses Tulane and Loyola universities saw a 118% turnout increase from 2015’s totals on Election Day — Edwards’ percentage share consummately rose from 65% to 91%. Though ostensibly just one precinct, the collegiate voters in Uptown show that, in the pursuit of his second term, Edwards was able to mobilize his necessary constituencies.