Skip to content
Home
/
Sifting Through the Results So Far

One has to go back to 1884 to find a newly-elected Democratic president, Grover Cleveland, who won without his party also winning both chambers of Congress.

If Joe Biden pulls out the presidential race — which seems likelier than not as we write this Wednesday afternoon, although much is uncertain — it seems likely he will be the next Democratic president to face at least one hostile chamber of Congress.

Amidst the highest turnout in modern history, both Biden and President Donald Trump turned out their bases and battled in an epic duel that remains undecided. In our final pre-election assessment, we warned of the possibility that many polls could be missing a significant share of the Trump electorate, and it seems like that indeed came to pass. While Biden currently leads in Michigan and Wisconsin, his thin margins are much smaller than many projected. While we study a lot of polls, we are not pollsters ourselves and do not conduct polls — and we are thankful for that fact right now. We have regularly cautioned our readers about polling drawbacks in this and previous presidential election cycles. It is obvious to most observers that serious problems remain that must be addressed by the polling industry. Not all were wrong, as we note below, but many (on both sides) showed results even very close to Election Day that ultimately did not materialize in the general election.

Encouragingly, at least for our own track record, we appear to have correctly rated every state in the Electoral College that has been called so far. As a reminder, this was our final rating map of the presidential race: 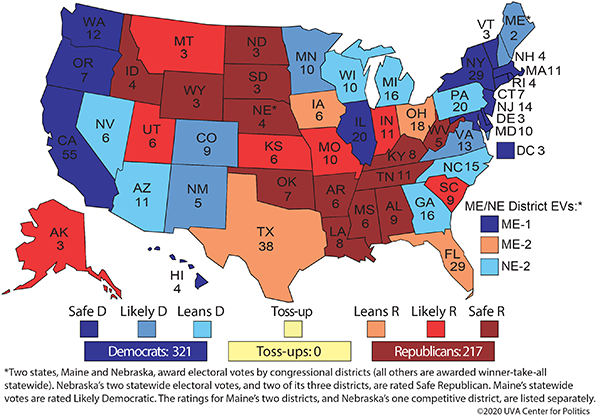 That includes Nebraska’s Second Congressional District, won by Biden. If Trump ends up carrying Georgia, North Carolina, and Pennsylvania, and Biden wins the rest of the uncalled states, NE-2 would be the decisive vote in a 270-268 victory for Biden.

The Biden campaign is projecting confidence that they ultimately will carry Pennsylvania and maybe even Georgia based on the remaining and extremely Democratic-leaning votes. The Trump camp, meanwhile, holds out hope that they ultimately will win Arizona based on late-counted votes, but the Associated Press and Fox News have called the state for Biden. Nevada also remains close, with Biden clinging to a narrow 0.6-point edge. We did think Nevada was the shakiest Hillary Clinton-won state for Biden, and that appears to have been the case: Biden apparently ran well ahead of Clinton in the other most competitive states she carried four years ago: Colorado, Maine, Minnesota, New Hampshire, and Virginia.

As many of you have already noted, we’re delighted to have called Florida correctly, as Biden’s horrific performance in Miami-Dade County — it appears that he only won the county by seven percentage points after Clinton won it by nearly 30 — signaled Trump’s victory there. Iowa and Ohio remained strong for Trump: The famous Iowa pollster, J. Ann Selzer, nailed another election, it appears, and in fact her poll showing Trump up seven in Iowa over the weekend was suggestive of enduring Trump strength across the Midwest, although it perhaps will not be enough for him to win this time.

The rhythms of the vote count were and continue to be a challenge: As expected, there were major disparities in how Democrats and Republicans voted, and different states (or even counties within states) counted Democratic-leaning early and mail votes and Republican-leaning Election Day votes in inconsistent ways. This will be a challenge in the coming days and weeks as the results are finalized across the country.

In the Senate, we were correct to ultimately favor Republicans in all of the Democrats’ “reach” targets in red states, as Republicans held Senate seats in Kansas, Montana, South Carolina, and Texas with ease. We are assuming they also will hold Alaska, where Sen. Dan Sullivan (R-AK) currently holds a big lead but many votes remain to be reported (that race is uncalled). Sen. Joni Ernst (R-IA), who we picked to win after seeing her as an underdog a few weeks ago, also won a clear victory. Republicans easily flipped Alabama. The Georgia Senate special election will go to a Jan. 5 runoff between appointed Sen. Kelly Loeffler (R-GA) and the Rev. Raphael Warnock (D); the state’s other Senate race, between Sen. David Perdue (R-GA) and Jon Ossoff (D), might as well; Perdue is currently at 50.6% of the vote, running a few tenths of a point ahead of Trump, as the incumbent tries to win outright. Sen. Gary Peters (D-MI) is doing a little worse than Biden in Michigan, but late-counted ballots may be enough to save him.

Ultimately, the Senate came down to the four Republican-held seats we and others highlighted as the most crucial races: Arizona, Colorado, Maine, and North Carolina. It seemed like Democrats needed to win all four to forge a 50-50 tie in the Senate. Democrats easily beat Sen. Cory Gardner (R-CO) and apparently also defeated Sen. Martha McSally (R-AZ), but Sen. Thom Tillis’ (R-NC) margin is a little better than Trump’s, and he appears on track to win. Sen. Susan Collins (R-ME) won, maintaining her signature crossover appeal with Democratic presidential voters. Ultimately, it looks like we’ll have picked all the Senate races correctly except for North Carolina and Maine (we left both Georgia races as Toss-ups). The Republican Senate majority appears likely to endure.

We and other handicappers had a rough night in the House, where it appears that the Republicans will end up netting seats even as the Democrats maintain their majority. We said on Monday that we were giving incumbents of both parties the benefit of the doubt: That was wise when it came to GOP incumbents, none of whom have lost so far (so we should have picked even more to win), but not with Democratic incumbents, as several of the most vulnerable ones have lost. There will be a lot to sort out in the coming weeks, but it appears that strong GOP turnout and a ticket-splitting dynamic that helped Republicans as opposed to Democrats is going to cost the Democrats a number of seats.

If in fact Biden holds on, the GOP likely will be well-positioned to re-take the House majority in 2022 given the usual midterm backlash against the president’s party. We also are heading into a redistricting year, where Republicans will retain advantages in more states than Democrats (although more states have shifted to nonpartisan redistricting systems since the 2010 redistricting round, when Republicans held a dominant hand in redistricting).

But before we look ahead to 2022, we’ll have to continue to examine the 2020 results, which are going to take a while to finalize in many places.

Cleveland, the Democrat elected in 1884 with a Democratic House but a Republican Senate, lost in 1888 but came back to win in 1892 in the midst of a political era, the Gilded Age, that featured extremely close presidential elections, a high degree of party unity, and very high turnout among eligible voters (although the franchise was denied to women and many others back then). Today’s political era has many of those same features. One also wonders if 2024 could feature a defeated president trying for a nonconsecutive second term — but Trump is also not yet defeated in 2020.