There are two vastly different lead paragraphs I could have used to open this story about the state of the race for the U.S. House. Instead of picking one, I’ll just include them both, and then try to explain the odd cross-currents we’re seeing in House races across the country.

Lead No. 1: With 12 days to go, House Republicans are beginning to expand their list of targets. They and their allies are plopping down money in Democratic-held blue districts in places like Hawaii, Iowa, and Nevada, all in an effort to push GOP gains into the double-digits. The Republican tide is so high that an indicted congressman in a swing district is in decent shape to win reelection.

Lead No. 2: For a party in line to expand their House majority this November, Republicans are sure having to shore up some deep red territory: Outside conservative groups are now spending big to hold Republican districts won comfortably by Mitt Romney in states like Arkansas, Nebraska, and West Virginia, and the GOP has had a hard time clearly putting away seats they’ve been targeting all cycle.

So what’s going on? Here’s where we see the House at this point:

Republicans still appear positioned for a gain of about six to nine seats. That’s been our projected range for the past few weeks, and we’re sticking with it for now, even though we can more easily imagine Republicans overperforming that range than underperforming it. The trouble in picking the House seats — and we’ll pick every single one in advance of Nov. 4 — is that there are contradictory signs on the national House map.

First, the good news for Republicans.

As mentioned in our Senate piece, Democrats now appear concerned that state Sen. Joni Ernst (R) is doing well enough in her race against Rep. Bruce Braley (D) that it could hurt Democratic prospects in the state’s two Democratic-leaning eastern congressional districts, the open IA-1 (currently held by Braley) and IA-2, held by four-term incumbent Rep. Dave Loebsack (D). Both parties’ House campaign committees are now spending on television in these districts, which Republicans tried but failed to win in their 2010 wave. IA-1 remains the better target for Republicans because it is open, but IA-2 now joins it in the Leans Democratic column. IA-3, a less Democratic open seat that was still won by President Obama in 2012, remains a Toss-up.

Coming back on to the board this week is Rep. Steven Horsford (D, NV-4). Crossroads GPS, the Karl Rove-founded conservative group, surprisingly bought $820,000 worth of airtime against Horsford in this Democratic-leaning district. Horsford may well be fine, but we’re moving the race from Safe Democratic to Likely Democratic. It’s possible Republicans sense an opportunity because Democratic early voting numbers in Nevada have been dreadful, probably in large part because there is no Senate race and the Democrats did not produce a quality challenger to Gov. Brian Sandoval (R), which might make Horsford weaker than expected. It’s also possible that a large earmarked donation has come into Crossroads for this contest to shake up a sleepy race at the last moment.

Something similar happened this week in New Jersey, where the Democrat-supporting House Majority PAC took money out of a competitive race in NJ-3 and put it into NJ-1, a very Democratic seat that state Sen. Donald Norcross (D), brother of Garden State political titan George Norcross, is favored to win. The group said that it’s spending the money in NJ-1 because they received donations earmarked for the race. It’s a Safe Democratic seat and will stay as such.

Some outside groups are also getting involved in HI-1, an open seat contest between former Rep. Charles Djou (R) and state Rep. Mark Takai (D). It should be close but we’re still betting on partisanship — the district is overwhelmingly Democratic — for now, rating the race Likely Democratic. Another race to watch, although the outside groups have not engaged as of yet: Rep. Lois Capps (D, CA-24), who is running against Chris Mitchum (R), son of the late actor Robert Mitchum. Candidate Mitchum claims a tiny lead in a recent internal poll; we doubt he’s right but we’re moving the race from Safe Democratic to Likely Democratic all the same.

In regards to late television ad buys in eyebrow-raising places, Nick Confessore of the New York Times made a good point on Twitter a couple days ago: “Groups making late buys in second-tier races. Ads are too expensive in top tier, they have late money, and they need to show donors impact.”

And sometimes candidates can win even when they are badly outspent on the air, are abandoned by their party, and — yes — are indicted. We’ve held off on moving Rep. Michael Grimm (R, NY-11) out of the Leans Democratic column, but the race still appears to be a legitimate Toss-up, so we’re now calling it as such. One problem for Democrats is that their candidate, Domenic Recchia, is from the wrong part of the district (Brooklyn, as opposed to Staten Island). Also, Recchia just isn’t all that great himself. I’ll let Jon Stewart explain why.

Finally, on the pro-Republican side of the House ledger, we’re moving one of the GOP’s big targets in its direction: We now favor state Sen. Evan Jenkins (R) over Rep. Nick Rahall (D, WV-3), a 19-term incumbent, and are moving the race from Toss-up to Leans Republican.

Readers may recall we had this race as Leans Republican earlier this cycle, but we moved it back to Toss-up after Rahall re-took the lead. Republicans argue that they’re leading, Democrats say they’re tied and will pull it out in the end. Ultimately, we just think it’s hard for any Democrat to win a district this Republican: Mitt Romney got 65% here in 2012, and this ancestrally Democratic state is trending Republican.

That said, something interesting is going on in another West Virginia district. And this is where we get into the good news for Democrats.

We’re hearing that the race for the open WV-2, which is currently held by Senate candidate Rep. Shelley Moore Capito (R), is extremely close. There are a lot of factors here. The biggest one is that Republican nominee Alex Mooney is from Maryland — he was once chair of the Old Line State GOP — and is easily attacked as a carpetbagger. A more subtle problem for Mooney is that he chose to live in the Mountain State’s eastern panhandle, while Nick Casey, the Democratic nominee, is from Charleston, which is the heart of the district. A number of local Republican officials are backing Casey, and he even got the endorsement of the Charleston Daily Mail, the more conservative of the two papers in the state capital. The endorsement headline: “In 2nd District U.S. House race, go with the one you know.” Newspaper endorsements don’t move races, but Mooney’s failure to win the endorsement of the paper is emblematic of his larger problems getting conservatives to back him in sufficient numbers. Put it all together, and WV-2 — despite being a 60% Romney seat in 2012 — goes from Leans Republican to Toss-up. One benefit for Casey, and why he might have a better shot than Rahall: He doesn’t have a federal voting record, and Mooney is a much weaker opponent than Jenkins.

In the same boat is AR-2, an open seat being vacated by Rep. Tim Griffin (R), who is running for lieutenant governor. While Republicans are likely to sweep the Senate and gubernatorial races, the Democratic nominees will almost assuredly perform well in this district, which at 55% Romney in 2012 is several points more Democratic than the state as a whole. Former North Little Rock Mayor Patrick Henry Hays (D) has run an energetic campaign against French Hill (R), a former Treasury Department official who Democrats gleefully attack as a “millionaire banker.” Recent independent polling from Talk Business/Hendrix College showed Hays up four points on Hill. This goes from Leans Republican to Toss-up, as well. AR-4, another open seat, is a longer-shot but plausible target for a Democratic takeover, too.

Last week, we moved the open seat in ME-2 being vacated by gubernatorial candidate Rep. Mike Michaud (D) to Toss-up, but now the National Republican Congressional Committee has canceled its ad buys. So state Sen. Emily Cain (D), just like that, goes back to being the favorite, at Leans Democratic.

The big picture: 231 seats at least Lean Republican, and 189 at least Lean Democratic, with 15 Toss-ups. Ultimately, the Republicans should win most of the Toss-ups, and probably a few that we currently rate as Leans Democratic.

Check out our ratings below. Next week, as per our tradition, we’re going to remove all the Toss-ups and place each race in at least the leaning categories. We’ll then tweak those ratings up until the election. We pick every House race, and we’re sure to miss more than a few. But it just wouldn’t be any fun otherwise. 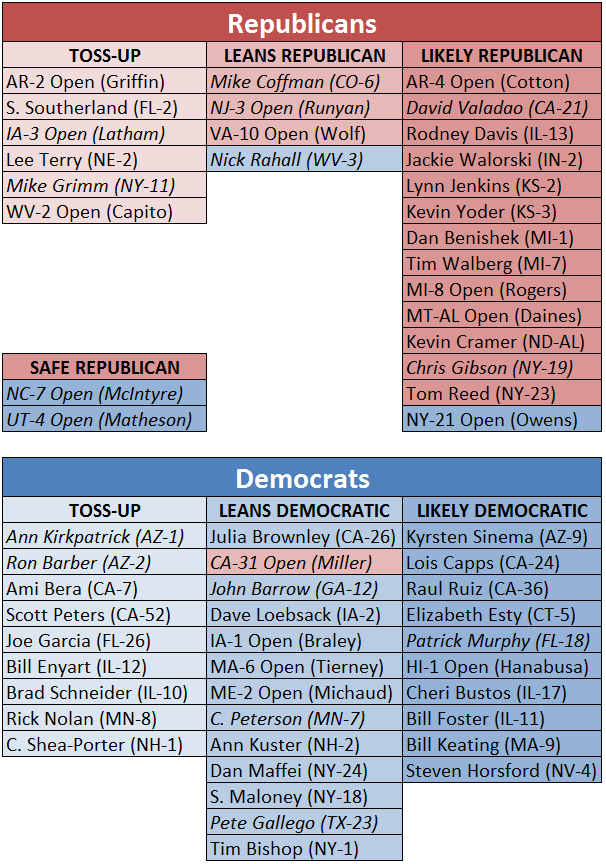