— Regardless of the primary outcome, Sen. Doug Jones (D-AL) faces an uphill reelection race — aside from the other Republicans, his flawed 2017 opponent, Roy Moore (R), is running again, but is unlikely to get the nomination.

— We continue to see the special election in the Los Angeles-area CA-25 as Leans Democratic. It’s unlikely a single candidate wins outright on Tuesday, so a runoff will likely ensure on May 12.

Sen. Doug Jones (D-AL), who shocked the nation by defeating beleaguered Republican Roy Moore in a 2017 special election, hopes to defy the odds once again by winning a full six-year term in deep red Alabama. Jones is no newbie in Washington. He used to work as a staff counsel for Sen. Howell Heflin (D-AL), whose Senate seat he now occupies. Working as a a federal prosecutor in the 1990s, Jones’ two most prominent cases secured the convictions of two Ku Klux Klan members who bombed a Birmingham church in the 1960s, which resulted in the deaths of four young girls.

A special election was triggered when then-Sen. Jeff Sessions (R-AL) was confirmed as Attorney General, but the timeframe of the election was a critical point of contention. Then-Gov. Robert Bentley (R-AL) appointed Alabama Attorney General Luther Strange (R) to the seat. Bentley also made the controversial decision to schedule the special election for the seat to coincide with the 2018 midterm elections. Following Bentley’s April 2017 resignation, Republican Lt. Gov. Kay Ivey ascended to the governorship and, perhaps in a symbolic break with her scandal-tarred predecessor, rescheduled the election for later in 2017. 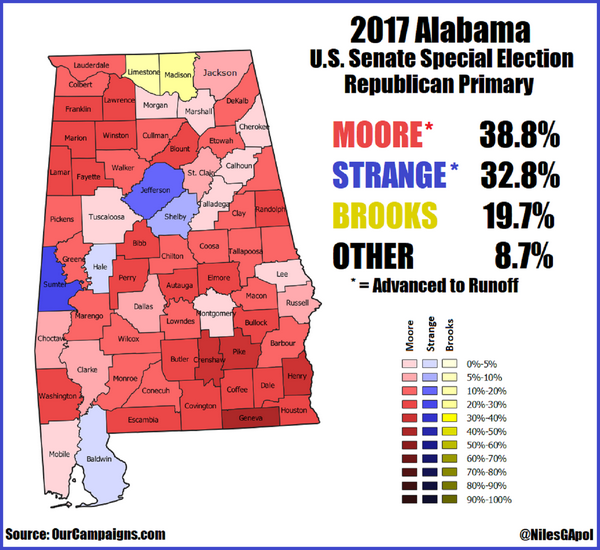 Ultimately, he was forced into a runoff with Moore, as Alabama law requires a candidate to amass a majority of the vote in order to win a primary. Looking at the primary by county, Strange did well in Jefferson County, which houses Birmingham and is the largest county in the state. Moore ran up impressive margins in the rural counties while Brooks held onto his home county of Madison, which includes Huntsville. In the runoff, Trump endorsed Strange and repeatedly traveled to Alabama to hold rallies for him, but Strange ultimately lost to Moore by nearly 10 percentage points.

Trump is certainly looming large in the race for the Republican nomination to challenge Jones. Jeff Sessions, who was ousted from his role as Attorney General after a public falling-out with the president, made something of a last-minute decision to enter the race for his old Senate seat. He quickly rolled out endorsements from nearly a dozen GOP senators, including his former Alabama colleague, Richard Shelby (R-AL).

Despite his universal name recognition in the state and generally good rapport with local Republicans, Sessions does not have the field all to himself. Former Auburn University football coach Tommy Tuberville is also running for the seat, as well as Rep. Bradley Byrne (R, AL-1). Roy Moore is again in a race for the seat, but in the wake of his high-profile 2017 loss, his candidacy seems like an afterthought — he has rarely made public appearances since kicking off his campaign and his fundraising has nearly dried up.

Polling has suggested that this is a three-way race with Sessions, Byrne, and Tuberville, with Sessions usually leading and Tuberville generally in second. A runoff is all but certain given that no candidate has polled close to or above 50% in public polls. In a runoff campaign, Sessions will get hit hard over his falling out with President Trump, who said in a June 2019 interview that his “biggest mistake” was appointing Sessions as Attorney General.

Tuberville has tried to wrest the “outsider” mantle in this race, promising to donate his Senate salary to Alabama’s veterans if elected. Byrne has promised to “fight for Alabama” and has made overtures to the more business-oriented wing of the GOP electorate. On the campaign trail, Sessions will often highlight his early relationship with Trump, frequently mentioning in ads that he was the first Republican Senator to endorse Trump — which is true.

A runoff would be held on March 31 if no candidate clears 50% of the vote next Tuesday. Because of lower turnout, partisan runoffs can be more volatile and harder to handicap than general elections. But the fact that Sessions, a former U.S. senator who had a high public profile as Attorney General, is polling in the mid to low-30s in next week’s primary may be an ominous sign for his prospects in a runoff.

Looking to the fall, there is little question that Trump will dominate the top of the ticket in Alabama — since 2004, every Republican presidential nominee has cleared 60% there. For Jones’ part, he has taken some tough votes since being elected. He voted against Brett Kavanaugh’s nomination to the Supreme Court in 2018 and, more recently, he voted to convict President Trump on both impeachment charges. As he often does, Trump took to Twitter and derided Jones as a “Do Nothing Stiff.” On Election Day in November, Jones could outperform the Democratic nominee by 20 percentage points and still come up short — the Crystal Ball rates that race as Likely Republican. For now, as we have seen over the last election cycles, Trump wields enormous power in Republican primaries and may play a big role in determining who the Republican nominee will be in this race.

The race to replace Katie Hill

When Katie Hill, a first-time candidate from the northern Los Angeles area, ousted sophomore Rep. Steve Knight (R, CA-25) in 2018, she was immediately seen as a rising star in the Democratic Party. At 31 years old, she was one of the youngest members of the 2018 freshmen class and was California’s first openly bisexual member of Congress. Upon her election, she ascended to a leadership position in the House. In October 2019, though, her congressional career came to an early conclusion, as she resigned after explicit photos of her were leaked online and as she faced allegations of inappropriate relationships with staffers.

Hill’s resignation set up a special election, which California Gov. Gavin Newsom (D-CA) set for March 3, coinciding with Super Tuesday. Most of the Democratic Party establishment is rallying behind Assemblywoman Christy Smith, who represents over 60% of CA-25 in the California Assembly. Cenk Uygur, who founded the popular commentary show The Young Turks, is running as a progressive alternative to Smith. However, local Democrats have criticized his weak connections to the district — primarily, that he doesn’t live there.

Knight is running to reclaim his seat in Congress, but it appears that local Republicans have soured on him since his defeat. The Los Angeles County Republican Party is supporting Mike Garcia, a former naval officer from Santa Clarita. Politico‘s Ally Mutnick pointed out that the Democratic Congressional Campaign Committee, the House Democratic campaign arm, has hit the airwaves attacking Garcia as a way to boost Knight’s chances of making the runoff, which would be held in May if no candidate gets over 50% of the vote.

The 25th District covers most of northern Los Angeles County and includes a sliver of Ventura County. Katie Hill’s 2018 margin was impressive, especially for a first-time candidate. She defeated Knight by nearly 9% and outran Gavin Newsom throughout much of the area, running behind him in less than a dozen precincts. Considering CA-25 has only started to turn blue only recently, Republicans may have some reason to feel hopeful, but they’ll have to contend with a Super Tuesday turnout dynamic that should benefit Democrats. Still, as the phrase goes, special elections are just that: special. We could be in for a surprise or two on Tuesday.

Democrats have a reason to be optimistic about their chances of holding this seat. It has been lurching to the left in the Trump area — after it voted for every statewide Republican candidate in the 2014 midterms, it backed Democrats almost entirely (Table 1).

This is a Mitt Romney 2012 to Hillary Clinton 2016 district, although unlike many others, it does not have a particularly high percentage of four-year college graduates (although it is diverse). This special election may be ultimately overshadowed by coverage of the presidential race on Super Tuesday — especially considering the lengthy window in which California counts ballots — but it should nonetheless be one of the more visible down-ballot races.