— Belief in conspiracy theories is most consistently correlated with Biden and Trump voters who favor secession.

— The majority of citizens who voted for Joe Biden or Donald Trump in the last election, when combined, believe in at least one of the conspiracy theories (43% of Biden voters and 90% of Trump voters).

In last week’s debut release on the findings from a new UVA Center for Politics/Project Home Fire study of the political, social, and psychological divides between Donald Trump and Joe Biden voters, we highlighted that fully 46% of the 2020 presidential election voters we surveyed at least somewhat agreed with this statement: “The situation in America has reached the point that I would be in favor of the [TRUMP VOTERS: more conservative “red” states / BIDEN VOTERS: more progressive “blue” states] seceding from the union to form their own separate country.” Support for this statement was quite broad: among Trump voters, 52% at least somewhat agreed with this statement, as did 41% of Biden voters.

To better understand this finding, the Project Home Fire team conducted analyses to learn what kinds of attitudes and opinions are more common among those in favor of secession compared to those who did not agree that states leaning in their own political direction should secede from the union. The results of this deeper analysis are striking.

First, our analysis revealed four beliefs commonly referred to as “conspiracy theories” are most powerfully predictive of favoring secession. Ranked in order of importance, these include:

— The Jan. 6, 2021 Capitol riot was actually instigated by agents of the FBI.

— A “storm” will soon sweep away the elites and restore rightful leaders.

— The government, media and financial worlds in the U.S. are controlled by a group of Satan-worshiping pedophiles who run a global child sex trafficking operation.

— There was a hidden “Deep state” effort to undermine the presidency of Donald Trump.

Table 1 shows the differences in support for these various statements for both the overall sample and those who expressed at least some support for secession. 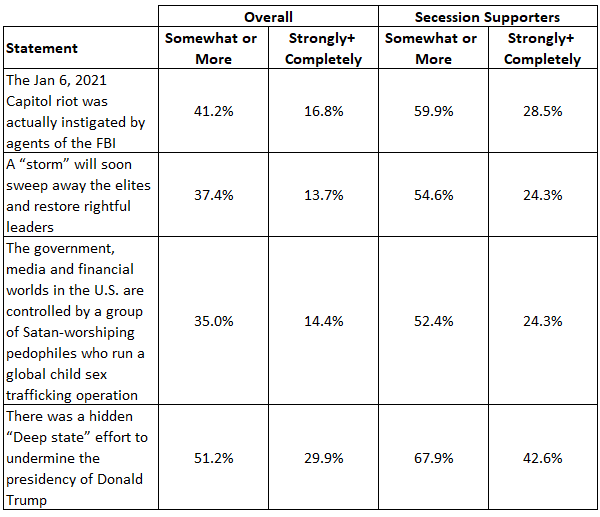 Our analysis further revealed two important findings, with the second finding being what many might see as rather counterintuitive.

— Second, of those who express some degree of belief in these statements, it is conspiracy-believing Biden voters who are more likely to say states leaning in their political direction (“blue” states) should secede from the union. That is that, while Trump voters are much more prone to express some amount of agreement with at least 1 of the 4 conspiracy statements, it is among Biden voters that the general correlation between conspiracy beliefs and favoring secession is strongest.

Additionally, we uncovered several beliefs, some of which can be classified as authoritarian, that are significantly more prevalent among voters who support secession. Again, ranked in order of importance, these include:

— Agreement that “It would be better for America if whoever is President could take needed actions without being constrained by Congress or the courts.”

— Agreement that “It’s just smart to be wary of people who are ethnically or culturally different from your own people.”

— Agreement that “I do not believe getting a Coronavirus vaccination is a good idea so requiring people to get vaccinated would be an unacceptable infringement on their personal freedoms.”

— Concern that they or someone close to them might “…be unable to get a higher paying job due to an increase of immigrants coming to America.”

— Agreement that “It would be best if news sources were censored so that people would not be able to get hold of destructive and disgusting material.” 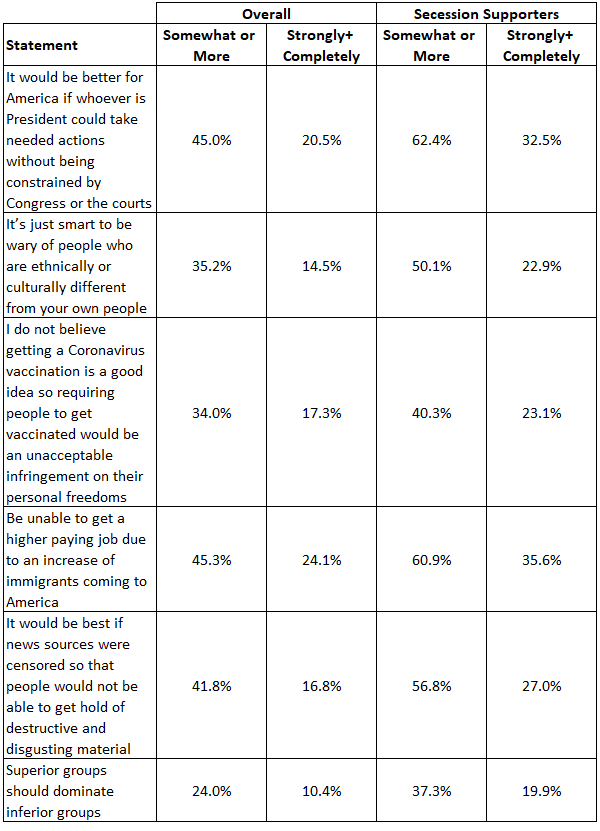 Together, these results indicate that, among U.S. voters overall, favoring secession of blue and red states, depending on one’s political leaning, is most strongly driven by two general beliefs tendencies:

— Tendency to believe in “conspiracy theories”; and

— Tendency to espouse particular beliefs and opinions, including some that can be classified as authoritarian.

Finally, a review of the demographic characteristics among voters who at least somewhat favor their politically compatible states seceding are generally more likely to be: ranging from 30 to 64 years old; employed full time; male and married with children living at home; describe themselves as “evangelical Christians.”

The results reported here suggest a potentially important general finding emerging from analysis of the Center for Politics/Project Home Fire survey data. We believe we’re seeing increasing evidence of a significant portion of Biden voters who, in at least some attitudinal respects, are notably closer to Trump voters than they are to other Biden voters. In the coming days and weeks we will be drilling more deeply into this to fully understand who these Biden voters are. And we’ll also be doing analyses to explore whether there might be an analogous subset of Trump voters who are in some ways attitudinally somewhat similar to Biden voters. To the extent that more presumably at-odds voter groups who in fact share similar perspectives may be out there, it would be supportive of Project Home Fire’s foremost objective of promoting compromise over conflict as the best way of responding to America’s many very pressing challenges.

For more information about the poll and this project, see last week’s story about it.