— Using 2016 presidential election results, we can map out the different paths that Clinton had to winning 270 electoral votes. These routes — and how far Clinton was from winning them — give us a template for how presidential candidates might plan their strategies for this November’s election.

— Flipping Michigan, Pennsylvania, and Wisconsin is likely Democrats’ best chance at winning back the presidency. But last election’s results reveal other paths to 270 for Democrats (like Florida and Arizona) that were competitive in 2016 and could be decisive this November.

— Republicans have a few pickup opportunities — most notably New Hampshire — that could tip a close election in their favor.

The 2016 presidential election was very close. Donald Trump’s 306 to 232[1] Electoral College victory over Hillary Clinton obscures just how competitive the race was. It was so close, in fact, that seemingly every news source reported that just roughly 80,000 voters in Michigan, Pennsylvania, and Wisconsin swung the election. This figure comes from totaling the margins in these three states that, had Clinton won them, would have flipped the election. Clinton would have won 278 Electoral College votes to Trump’s 260.

Accurate as that may be, there are infinite ways to slice up the electorate. Voters can be cherry picked from any group of states that collectively have 38 Electoral College votes. For instance, Texas has precisely 38 electoral votes, so turning it from red to blue also would have flipped the election. The 800,000 or so Texas voters who provided Trump’s winning margin, just like those in Michigan, Pennsylvania, and Wisconsin, determined the 2016 election, too. Of course, voter swings within states are not independent — states, demographics, and constituencies often move in tandem or opposition to one another.

Still, it is generally easier and less expensive to influence fewer voters than more. The minimum number of voters needed to assemble 270 Electoral College votes would be invaluable information to presidential campaigns.

And while the election map of 2016 will be different than the landscape this November, it’s still the best template we have for forecasting the upcoming election. Map 1 shows the 2016 Electoral College results. 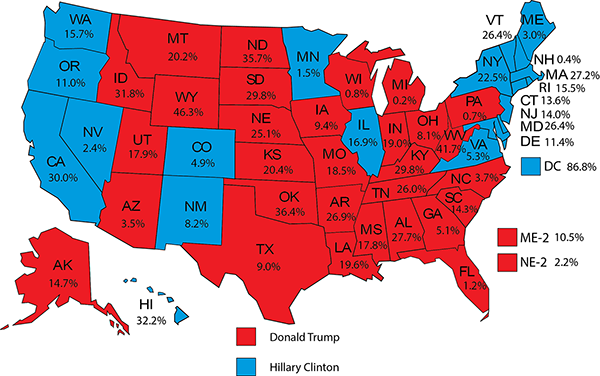 The cost of an Electoral College vote

A quick example might help. Below, in Table 1, are the three crucial Rust Belt states of 2016 — Michigan, Pennsylvania, and Wisconsin. All election data used in this piece are from Dave Leip’s Atlas of U.S. Elections.

We can use these data points to look at the 2016 presidential results and how far Clinton was from winning the Electoral College. We’ll do this by exploring specific routes Clinton had to beating Trump in the Electoral College, the total number of votes this would have required her to net, and the cost of the electoral votes.

This analysis is not an interrogation of Clinton’s and Trump’s strategies. Instead, it will use the electoral margins of 2016 to understand the possible paths forward for the parties in 2020. Following each table, there will be a bolded 2020 Takeaway — key information to consider for November’s presidential contest.

These paths, of course, were not the only routes Clinton had to victory nor are they the only way a Democrat could win in November. They are simply meant to cover some of the most likely scenarios. Readers who want to game out the Electoral College can use the great interactive tools at 270ToWin.com or Taegan Goddard’s Electoral Vote Map.

First up, the Rust Belt route from Table 1 where Clinton flips Michigan, Pennsylvania, and Wisconsin.

2020 Takeaway: Michigan, Pennsylvania, and Wisconsin should be a priority (if not the number one priority) for both the Republican and Democratic nominees. Trump won these states by the smallest collective margin in 2016 and they have, by far, the cheapest Electoral College votes.

Arizona has been trending Democratic as densely populated Maricopa County, home to Phoenix, becomes less Republican. Trump, however, still carried the county by just under three points in 2016. Substituting Arizona for Wisconsin — which gave Trump his largest percentage margin of the three Rust Belt states — substantially increases the number of voters Clinton would have had to win and the cost per Electoral College vote. Substituting Arizona for Michigan does the same.

Table 4 is the same as Table 2 but with Clinton winning North Carolina instead of Arizona. Table 5 then substitutes Wisconsin for Pennsylvania.

Even with its diversifying population and shifting demographics, to win with North Carolina, Clinton would have needed to net more votes overall, as well as more votes per Electoral College vote, than in any of the previous paths. Tables for Georgia are not included because a Clinton victory with Georgia would look similar to one with North Carolina or Arizona, just require even more votes.

2020 Takeaway: North Carolina could fill the same role as Arizona, becoming the tipping point state if Democrats only flip two of the three Rust Belt states. However, given Trump’s larger 2016 margin in North Carolina, it would probably be more difficult for Democrats to flip than Arizona.

Besides winning Michigan, Pennsylvania, and Wisconsin, this was Clinton’s path with the smallest vote deficit as well as the cheapest Electoral College votes. Michigan was the closest state in the Rust Belt and Florida was the closest in the Sun Belt.

If Clinton had edged out victories in both of these, she would have won an additional 45 Electoral College votes. This would have brought her total to 277 and dropped Trump to 261. She also could have substituted either Pennsylvania or Wisconsin in place of Michigan, but neither of those states were as close as Michigan and would probably have been more difficult to flip.

2020 Takeaway: Florida will be crucial if the Republican nominee holds the Rust Belt. Democrats’ easiest non-Rust Belt routes likely require flipping Florida. A close election could hinge on Florida and Michigan, as these were the closest of the Sun Belt and Rust Belt states in 2016 and have enough Electoral College votes to flip the election.

Clinton fell 204,145 votes short of flipping Arizona and Florida. Because Arizona had a much wider vote margin than Michigan, the total margin and cost per Electoral College vote is much higher than flipping Florida and Michigan, shown in Table 6.

2020 Takeaway: If Democrats are unable to flip any of the Rust Belt states, their best Sun Belt only path may be flipping Florida and Arizona. This is the entirely non-Rust Belt route with the smallest total margin and cheapest Electoral College votes. Additionally, Florida and Arizona are more demographically similar than Florida and Michigan. Targeting these two states and their high portion of Latino voters may be more practical for Democrats than holding Michigan and flipping Florida. However, Democrats have fallen just short of winning recent Florida statewide competitions. Whether this is just bad luck or something inherent in the state, relying on Florida could be dangerous for Democrats in November.

This path would have required Clinton to net nearly half a million more voters. It’s also much costlier per Electoral College vote than the Florida route shown in Table 7.

2020 Takeaway: If Democrats are unable to flip the Rust Belt or Florida, they will probably need to flip Arizona, North Carolina, and Georgia. This route, though, had a much larger margin and costlier Electoral College votes in 2016, and seems unlikely to be easier for Democrats than the other proposed paths.

Finally, in Table 9, we have the Texas route.

To win Texas, Clinton have needed to net over 800,000 more voters. This is far more than any of the other routes explored above and over 10 times as many as the Rust Belt path in Table 1. And even though it would have brought Clinton exactly to the 270 Electoral College votes she needed, it still is much costlier per Electoral College vote than any of the other paths.

2020 Takeaway: Texas is probably out of reach for Democrats. While flipping Texas has been a Democratic fantasy for years (and one which may be getting more realistic), it had a bigger margin in 2016 than many other states and looks unlikely without a Democratic landslide in the Electoral College.

Flipping this electoral vote would have opened up additional options for Clinton. For example, flipping Pennsylvania, Michigan, and NE-2 would have tied the Electoral College.

Going through every single plausible path to victory or a tie would get confusing. We have to stop somewhere. And while there are other Democratic paths to victory beyond the nine explored here, routes involving other states that she lost by over 8% (like Ohio or Iowa) appear less plausible and much costlier. In simulations where Clinton had won these less competitive states, she probably would already have won the requisite 270 Electoral College votes elsewhere.

There are also a few states that Clinton won in 2016 that this year’s Republican nominee could plausibly flip.

Table 11 shows the most competitive states (by percentage, total votes, and cost per electoral vote) that Clinton won in 2016.

New Hampshire has the smallest margin and the cheapest electoral votes of the four states. If the Republican nominee were to flip New Hampshire, or any of the other three states, they could block various Democratic paths to victory in Tables 1-9. Besides New Hampshire, with its particularly small margin, these states would likely be window dressing on a Republican Electoral College win.

2020 Takeaway: If Republicans can flip New Hampshire, this will give them an electoral buffer in other regions. If the Democratic nominee loses New Hampshire, the paths explored in Tables 3, 5, 7, and 9 would all fail to deliver an Electoral College majority. The other states — Minnesota, Nevada, and Maine — appear to be heavier lifts for the 2020 Republican nominee. If they were to flip one of these, they would likely have already won the Electoral College through more Republican-friendly states.

There’s no way to cover all the Electoral College possibilities without things getting too muddled. The 2016 map helps narrow our sights onto the most competitive states and provides the best template for a 2020 electoral map.

Both Democrats and Republicans would be foolish to sacrifice the Rust Belt states of Michigan, Pennsylvania, and Wisconsin, given that this was Clinton’s route to victory in 2016 with the smallest total vote margin. But the 2020 campaigns should consider other routes — like Florida and Arizona — that also could have handed Clinton the presidency. It is true that 80,000 voters in the Rust Belt determined the 2016 election. It is also true, though, that 200,000 voters in Florida and Arizona; 475,000 in North Carolina, Georgia, and Arizona; and 800,000 in Texas did the same.