As the country has become more divided and polarized, the number of swing states has steadily shrunk. Even in 2000, when 537 votes in Florida elected a president, just 12 states were decided by five points or less. That number contracted to just four states in 2012.

When Jimmy Carter defeated President Gerald Ford in 1976, every big state was competitive: California, New York, Pennsylvania, Texas, Illinois and Ohio all had at least 25 electoral votes, and each one was decided by less than five points. All told, 20 of 50 states were won by five points or less. This wasn’t unique; an earlier close election, the 1960 match-up between John Kennedy and Richard Nixon, produced razor-thin results in exactly the same number of states, with almost all the mega-states of that day recording tight margins.

We don’t really have elections like 1960 and 1976 anymore. In the current Electoral College battlefield, 40 of 50 states have voted for the same candidate in all four elections since 2000. And, of the 10 exceptions, three were fluky: New Mexico’s pluralities were wafer-thin in both 2000, when it went for Al Gore, and 2004, when George W. Bush took the state. It has now trended mainly Democratic. Indiana and North Carolina, meanwhile, narrowly went for Barack Obama in 2008, in part because Obama’s campaign invested heavily in field operations and advertising in those states while John McCain, out of necessity, neglected them. Overall, Hoosiers are still predominantly Republican and Tar Heels marginally so. That leaves just seven super-swingy states: Colorado, Florida, Nevada, Ohio, and Virginia, all of which backed Bush and Obama twice each, and Iowa and New Hampshire, which have voted Democratic in three of the last four elections.

So it’s no wonder that these special seven states start as the only obvious toss-ups on our first 2016 Electoral Map. 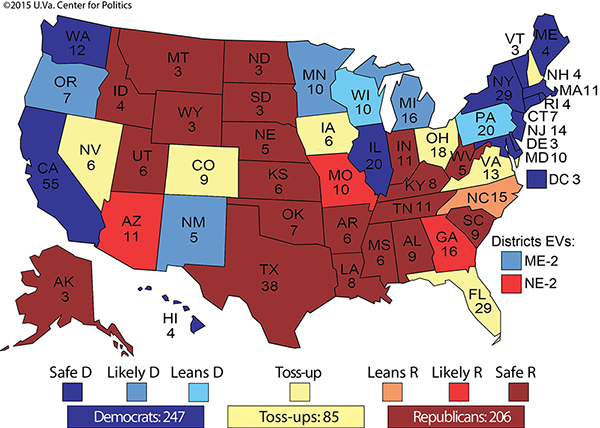 This map feels like déjà vu: It’s effectively the same map we featured for much of the 2012 cycle, and it unmistakably suggests the Democratic nominee should start the election as at least a marginal Electoral College favorite over his or (probably) her Republican rival. However, at the starting gate it is wiser to argue that the next election is basically a 50-50 proposition.

How can that be when Democrats are so much closer to the magic number of 270 than Republicans?

At heart, it’s because the past is often not a good guide to the future. With regularity in modern history, the Electoral College’s alleged lock for one party has been picked by the other party, usually at eight-year intervals. A few states that appear to be solidly in one party’s column can switch in any given year because of short-term (Indiana) or long-term (Virginia) forces. Other states that merely lean to one party require less of a push to change allegiances. North Carolina tilts to the GOP and Wisconsin to the Democrats, but it doesn’t require much imagination to foresee the winning party flipping one or the other.

For the Democrats, a victory in 2016 entails zero expansion of the blue map, merely the limiting of blue-to-red transformations. Assuming the lean, likely, and safe Democratic states remain loyal to the party, the nominee need only win 23 of the 85 toss-up electoral votes. And if a lean Democratic state such as Wisconsin turns red, it is relatively easy to replace those votes with one or two toss-ups.

On the other hand, Republicans must hold all their usual states plus find a way to stitch together an additional 64 electoral votes, or 79 if they can’t hold North Carolina. To do this, the GOP candidate will have to come close to sweeping the toss-ups under most scenarios — a difficult task unless the election year’s fundamentals (President Obama’s job approval, economic conditions, war and peace, and so on) are moving powerfully against the Democrats.

It is possible, maybe quite plausible, that any new Republican path to Electoral College victory will wend through the whiter-than-average industrial Midwest, but as of now it’s more likely to expect the GOP’s electoral map to look much like George W. Bush’s narrow route to the White House — a solid South, rural Midwest and Rocky Mountain majority.

One could argue that we’re giving the Democrats short shrift by not calling rapidly diversifying North Carolina a toss-up, or leaning Nevada to them because of its growing and largely Democratic Hispanic vote. But if one assumes that the 2016 outcome will be closer than Obama’s 2012 national victory margin of four percentage points — and that is a reasonable working assumption 18 months in advance of Election Day — then Nevada should be tight while North Carolina would take on a reddish hue.

That said, there are two predictions we can make at this point.

First, if Republicans lose either Florida or Ohio, the nominee has no realistic path to victory. Both states are typically at least slightly more Republican than the nation as a whole. If GOP voters are thinking strategically during the nominating process, they will pick a candidate with a profile appealing to Sunshine and Buckeye state residents.

Second, while there are credible Democratic paths to the White House without Virginia, anything other than a win or a loss by just a percent or two in the Old Dominion will signal the Democrat’s downfall. Virginia was (slightly) more Democratic than the nation in 2012 for the first time since Franklin Roosevelt’s era, and population trends that are increasingly favorable to Democrats are continuing.

We’ll expand on this analysis in this Thursday’s Crystal Ball newsletter. But, if you plan to go where the action will be, you can already safely book those autumn 2016 travel packages to Columbus, Denver, Des Moines, Las Vegas, Manchester, Richmond and Tampa.