— A forecasting model based on postwar electoral history along with the president’s approval rating and the House generic ballot points to Democratic gains next fall.

— The model’s projection won’t be finalized until late next summer and will be based on whatever the president’s approval and the House generic ballot polling is at that time.

— The Republicans enjoy some advantages on both the House and Senate map that might allow them to overperform whatever the model’s final projection is.

With more than 20 Democrats vying for their party’s 2020 presidential nomination, it is understandable that the nation’s attention has been focused in recent months on which candidate will emerge from next year’s primaries to challenge President Donald Trump in November 2020. But no matter whom the Democrats nominate and no matter who wins the general election, the ability of the next president to carry out his or her policy agenda will depend on which party controls the House of Representatives and Senate in 2021.

Even if President Trump is reelected, a Democratic House would probably continue to aggressively pursue investigations into allegations of misconduct by the president and his allies during and after the 2016 campaign and to oppose many of the president’s policy initiatives. A Democratic Senate would almost certainly mean that most of the president’s judicial nominees would be dead on arrival and many of his executive branch appointments would face tough scrutiny. On the other hand, a Democratic president would have little or no chance of enacting an ambitious progressive agenda if Republicans controlled either chamber of Congress, and a Republican Senate could be expected to block a Democratic president’s judicial nominees, especially any appointments to vacancies on the Supreme Court.

In the last election, Democrats won 235 seats in the House of Representatives to 199 for the GOP with one vacancy remaining to be filled in a special, do-over election in North Carolina’s Ninth Congressional District. Republicans won a 53-47 seat majority in the Senate, with 34 seats up for grabs in 2020. Of those seats being contested, 22 are currently held by Republicans and 12 are currently held by Democrats. Republicans would need a pickup of 18 or 19 seats in the House, depending on the results of the special election in North Carolina, to take back control of the lower chamber and Democrats would need a pickup of three or four seats in the Senate, depending on which party controls the vice presidency in 2021, to take back control of the upper chamber.

4. The president’s party should lose seats in midterm elections even after controlling for the other predictors.

Table 1 presents estimates for the House and Senate forecasting models based on all congressional elections between 1946 and 2018 except for two elections, 1948 and 1988, for which no generic ballot polling data is available. The results show that all of the independent variables included in the model have statistically significant effects in the expected direction for both House and Senate elections. However, the House model provides considerably more accurate forecasts with an adjusted R2 of .78 compared with an adjusted R2 of only .54 for the Senate model (R2 figures closer to 1 are more predictive, while those closer to 0 are less predictive). This difference in accuracy reflects the fact that the House results are based on 435 contests across the entire country in every election while the Senate results are based on only 33-35 contests in states holding Senate elections in a given year. In addition, the higher visibility of individual senators compared with their House counterparts probably means that chance factors play a larger role in determining Senate seat swing. As a result, forecasts of Senate seat swing should be viewed with caution. For the 2018 midterm election, the model predicted a Democratic gain of 42 seats in the House and no change in the Senate. The actual results were a Democratic gain of 40 seats in the House and a Republican gain of two seats in the Senate. 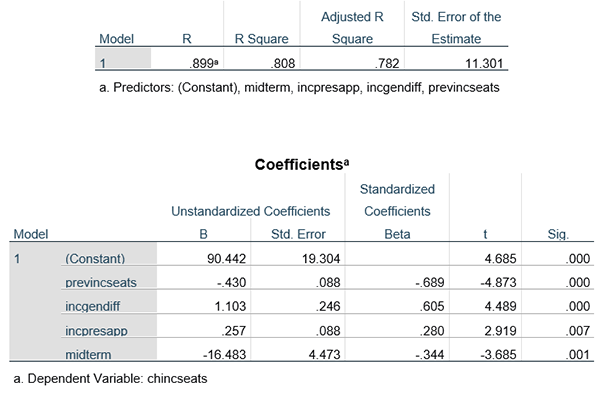 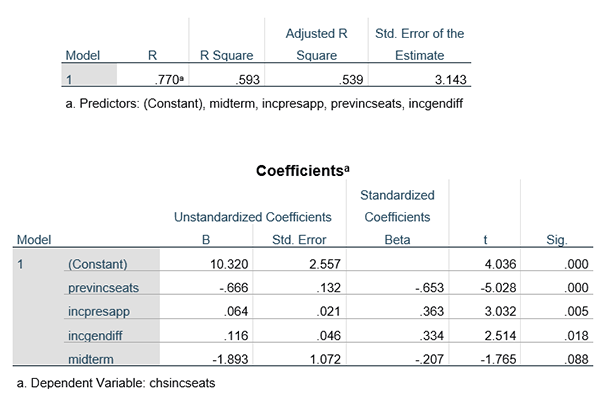 Table 2 presents conditional forecasts of seat swing in the 2020 House and Senate elections depending on the Democratic margin on the congressional generic ballot and President Trump’s net approval rating in late August or early September of 2020. The other two predictors in the model — Republican seats at stake and whether it is a presidential or midterm election year — are already set. 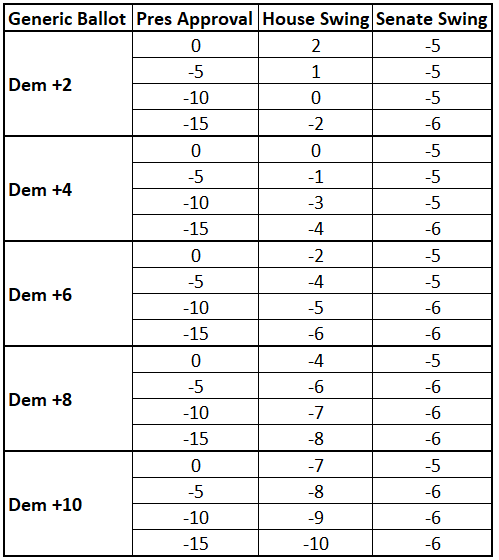 The main takeaway points from these results are that, based on the president’s current net approval rating and the current House generic ballot, the Democrats would be likely to make modest gains in the House elections and have a real chance to win control of the Senate. According to the most recent averages from FiveThirtyEight, national polls have shown a Democratic advantage of around 6.5 points on the House generic ballot — somewhat similar to the results prior to the 2018 midterm election — and a net approval rating for President Trump of about -10. Those numbers, if they continue into the late summer of 2020, would predict Democratic gains of around five seats in the House and six seats in the Senate.

Barring a dramatic shift in the electoral landscape, Democrats appear very likely to hold onto their majority in the House of Representatives in the 2020 elections and make at least modest gains in the Senate. However, there are significant caveats with both projections. Obviously, one of those is that it is very early and that the president’s approval rating and the generic ballot could very well be different late next summer.

In the House, we are in an era with limited ticket-splitting and a weak incumbency advantage. Additionally, the overall House map has a Republican lean: Republicans could win the House back by defeating fewer than two-thirds of the 31 Democrats who hold seats that Trump carried in 2016 (and only three Republicans hold seats that Hillary Clinton carried). The confluence of these factors could allow Republicans to overperform the projection in this model, particularly if Trump is reelected.

While the model predicts a good chance of a Democratic majority in the Senate in 2021, that prediction should be taken with considerable caution considering the margin of error of the model and the fact that only a handful of Republican seats that are up next year are in Democratic-leaning or swing states. Moreover, if Democrats do take back the Senate, it will almost certainly be by a very narrow margin, which would make it difficult to pass the sort of progressive legislation advocated by many of the party’s 2020 presidential candidates.