Skip to content
Home
/
The Campaign That Didn’t Matter?

— New numbers from the UMass Poll show very few undecided voters and suggest the vast majority of those voting for Joe Biden and Donald Trump made up their minds well before the pandemic and before Biden secured the Democratic nomination.

— Nearly two-thirds of likely voters say they made up their minds when Donald Trump was elected four years ago.

Most voters decided long ago

Estimates suggest that, when the dust settles, more than $6 billion will have been spent on this year’s presidential race. That’s more than double what was spent in 2016. Which makes sense, given that the stakes are so high. But, how many voters have been persuaded?

Political operatives, the news media, and pundits painstakingly dissect the impact of convention speeches, the latest tidbits from the campaign trail, each new horse-race poll, the utterances of “undecided voters” in hokey on-air focus groups, and every debate gaffe or knock-out blow. We political scientists, on the other hand, have spilled substantial ink wondering whether campaigns even matter. After all, early studies of voting showed precious little persuasion during the course of a campaign. And, models based on indicators that precede the heart of campaign season are generally quite predictive of the final results while horse-race polls often jump around with momentum and leads sometimes swinging back and forth in the months prior to an election. As is often the case, the truth probably sits somewhere in the middle, with campaign effects producing minimal persuasion and the fundamentals carrying the day most of the time, but campaign choices, mobilization efforts, candidate qualities, and key events helping shift outcomes enough to be decisive in tight contests like the one in 2016. Our current hyper-polarization along party lines means that very few voters and states are truly up for grabs every four years, but also has tended to ensure that presidential elections have been relatively close since the dawn of the 21st Century.

New evidence from the UMass Poll, run by me and my colleagues at the University of Massachusetts Amherst and fielded by YouGov, suggests that 2020 may represent a low water mark for persuasion effects. For starters, our national poll, taken between Oct. 20-27, finds just over 1% of likely voters still undecided and shows Joe Biden with a commanding nine-percentage-point advantage (Biden 53% to Trump 44%).

When did these voters decide for whom they would vote? We asked them. Sixty-one percent report having made up their minds when Donald Trump was elected four years ago. Another 23% say they knew how they’d vote during the first half of Trump’s term. That’s nearly 85% of voters deciding well before the novel coronavirus jumped species. Ten percent tell us they chose a few months ago. For those of you keeping score at home, that leaves just 5% of voters who say they made up their mind in the last few weeks or days. Just over half of voters note that they made up their mind earlier than usual this time around.

Table 1: When presidential voters made up their minds 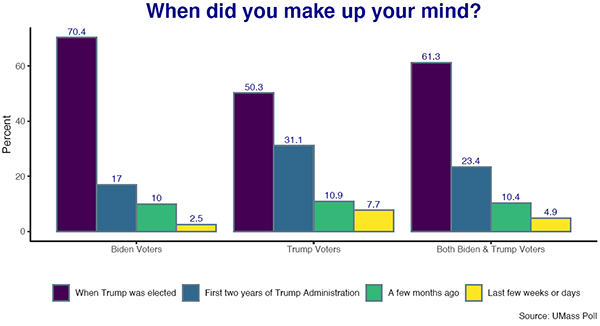 Seventy percent of Biden voters say they knew how they would vote when Trump was elected. Another 17% made up their mind during the first half of Trump’s term. So, more than 87% of Biden voters knew how they’d vote well before the former vice president secured the Democratic Party nomination. Only 2.5% of Biden voters decided in the last few weeks. Trump voters seem to have waited a bit longer. Fifty percent tell us they knew how they’d vote when Trump was elected. Thirty-one percent decided during the first half of the president’s term, and 7.7% waited until the last few days.

Ironically, the year in which everything seems to have changed may have produced a campaign season during which virtually no voter minds were changed.