How big did Hillary Clinton bounce in the polls after the Democratic National Convention? Based on the available data as of Wednesday afternoon, the Democratic nominee soared higher than Donald Trump did.

At the end of the GOP convention, we laid out how we would look at the bounce — we used the median poll percentage for a candidate from surveys with at least one survey date inside the week before a party convention and compared it to the highest median of three-poll (or more) samples in the first week after the convention. Since 1988, the typical median bounce has been about five percentage points for both parties, though that number has been smaller in recent years.

Trump’s median poll result rose three points, from 41% in the week before the Republican National Convention to a peak of 44% in each of the first few days after the GOP confab. However, thus far, Clinton’s median survey number has improved from 44% prior to the Democratic National Convention to a high of 48.5%. Her peak could conceivably grow if more polls are released showing her above 50% with survey dates that include Aug. 5, a week after the DNC.

Our sample of polls for the 2016 GOP and Democratic convention bounces were based on those available at HuffPost Pollster and RealClearPolitics that met our timing criteria. Below in Tables 1 and 2, we show the polling data used to arrive at those median bounce figures. See the notes for methodological questions. 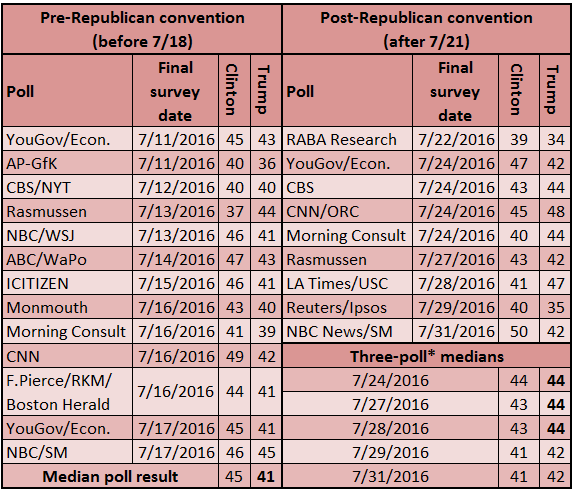 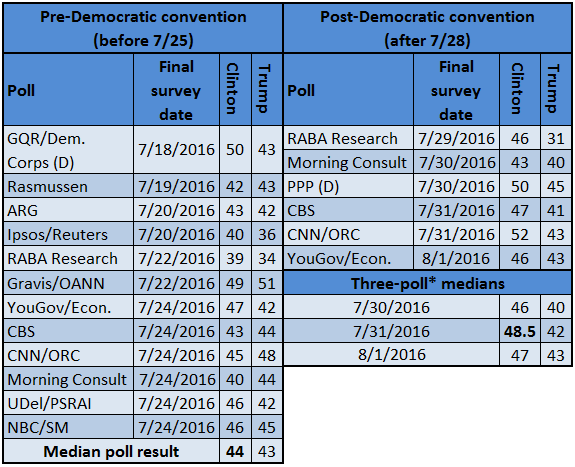 Notes: *If there were three or more polls on a single day, the median for that group of polls was a data point. If there were fewer than three polls in a single day, the data point was based on the most recent set of three or more polls up to the latest day surveyed (e.g. the median result for one poll ending on July 27, one poll ending on July 28, and one poll ending on July 29 would form a data point for July 29). The analysis excludes surveys that included days during the conventions, i.e. any poll that was in the field on July 18-21 for Trump’s bounce and July 25-28 for Clinton’s bounce. The RABA Research poll with a final date of July 22 was not included in the July 24 median in Table 1 as there were at least three polls (four) that were completed on July 24. The reason for looking at the median result rather than the average was to reduce the impact of outliers in small-sized samples while trying to isolate the timing of the bounce. This is surely an imperfect exercise because of the variability in polling, but nonetheless it’s one way to look at this phenomenon.

As we discussed in our first piece after the GOP convention, Clinton’s bounce was anticipated, in part because the convention was highly professional and carefully planned — except for the clumsy process of picking up credentials (grumble) — and featured some notable surrogates, particularly President Barack Obama, speaking on Clinton’s behalf. The heavily Democratic audience — the GOP convention naturally had the opposite, a mostly Republican audience — lapped it up. Gallup shows that Clinton’s favorability among Democrats has ticked up from 70% the week of the Republican convention to 78% for the week through Aug. 2. The improving view of Clinton among Democratic partisans helps account for her overall favorability shift from 37% during Trump’s convention — when Gallup showed them tied in favorability — up to 43% as of Aug. 2, 10 points above Trump’s 33% favorable rating.

Trump’s horse race and favorability numbers have fallen back, in part because the Democratic convention in Philadelphia was scheduled right after the Republican meeting in Cleveland. And it wouldn’t shock anyone if Clinton’s numbers ebb somewhat after this point in the campaign. It’s important to remember that Clinton’s notably improved position may partly be a result of her convention coming after what some view as her 2016 nadir: a couple of terrible weeks for her campaign that saw the FBI director sharply criticize her handling of emails as secretary of state as well as Republicans slamming Clinton in Cleveland.

Entering the month of August, with 96 days to go, there is still some more waiting to do. As of Wednesday afternoon, Clinton has a six-point lead in HuffPost Pollster’s average and a 4.5-point edge in RealClearPolitics’ average. To some extent, this has restored the status quo ante, relative to where the race was in late June. But again, a bounce is called a bounce for a reason; there is probably at least some descent to come in her poll numbers. Going back to 1980, the final outcome in presidential elections has differed by about eight points compared to polls at around this time before November, with the difference shrinking to about four points as the race moves inside of 80 days to go. Also keep in mind that the candidate leading the polling average 30 days after the convention has gone on to win every election in the modern era of presidential politics (1972 to now). But that historical pattern may be worth less this year because the conventions both took place much earlier this year compared to past cycles — 1960 was the last time both parties held their nominating conclaves before the end of July.

All in all, the bounce and the polling averages are good news for Clinton. Now the main question is whether or not her post-convention bump will largely hold or shrink significantly. We are almost three months out from Nov. 8, and there is still time for one or more shake-ups.