Basketballs have them, Tigger has them, and presidential candidates have them — at least most of the time. They are bounces, and for the respective major party nominees, the upticks in support typically show up in national horse race polling right after their party conventions.

Once an actual mechanism for selecting a party’s presidential nominee, party conventions now serve as scripted infomercials for the parties and their candidates. The only drama comes in seeing whether one of the parties makes a major mistake or in trying to quantify the convention’s effect. Hence, we measure the bounce — if it occurs — and see if it lasts.

Charts 1 and 2 show the typical bounce that a candidate gets from a convention by comparing the Gallup poll of registered voters taken before the convention with the one taken afterward over the past half-century. 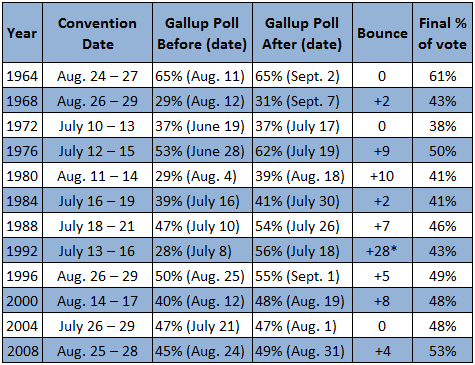 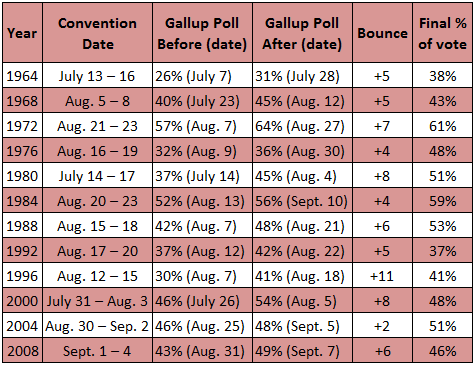 If we examine the record from 1964 to 2008 in the charts above, we can make several observations about the nature of post-convention poll bounces:

The American people already know Barack Obama well, and their opinions of him are relatively set: Obama’s approval rating this year, based on the RealClearPolitics average, has never dipped below 44.5%, nor has it exceeded 49.2%. His head-to-head polling average versus Romney has also been highly durable. Granted, Romney’s performance against Obama has been just as consistent, but given that Obama is in a considerably weaker position now than he was in his race against John McCain four years ago, Romney’s numbers probably have more room to grow.

So we’re going to watch whether Romney gets a bounce after next week’s Republican convention — and, if he does, whether he keeps it. While not an air-tight predictor, this will be the first general election indicator of Romney’s likely fate — and Obama’s too.