— Bernie Sanders’ strong performance in Nevada puts him in a good position to become the Democratic nominee.

— Sanders is getting close to Joe Biden in South Carolina, and he appears positioned to perform well on Super Tuesday.

— Democratic rank-and-file voters do not seem worried about Sanders as the nominee. Many Democratic leaders feel differently. They are running out of time to make the voters heed their warnings.

Anti-Sanders Democrats running out of time

Last April, we noted that despite the ever-growing Democratic presidential field and delegate allocation rules that can string out a nomination fight, there was the possibility of a single candidate getting an early grip on the nomination because of the frontloaded calendar. By the end of St. Patrick’s Day, states awarding more than three-fifths of all the pledged delegates will have voted. We here at the Crystal Ball are big fans of the wisdom of the late Yogi Berra, and we used one of his gems at the time to sum it all up: “It gets late early out there.”

And with Bernie Sanders’ success so far, it may be getting late faster and earlier that we might have thought.

This is not necessarily because Sanders is somehow now guaranteed to amass a pledged delegate majority by the end of the nominating season, but rather because he may be able to start building a lead that, because of proportional allocation rules, no other single candidate can reasonably surpass during the nominating season. So even if he doesn’t get precisely to 50% +1, the magic number of 1,991 pledged delegates to win the nomination, he could be both close enough — and far enough ahead of whoever ends up in second — that he’d have the only real claim to the nomination.

Since New Hampshire, there have been many polls released both nationally and of the Super Tuesday states. While Sanders is not necessarily dominating, he seems to be competitive all over the diverse Super Tuesday map. In fact, Sanders now even appears to be within range of Joe Biden in South Carolina, where more than half of the electorate will be black. Biden probably is still favored to win the Palmetto State on Saturday, but the fact that Biden now appears to be in something of a dogfight with Sanders there is evidence enough of the former vice president’s precarious position.

A Sanders win in South Carolina — which now seems possible — would represent the culmination of an incredible February for Sanders in which the Democratic Party’s insurgent, Sanders, would replicate the path of the GOP’s insurgent, Donald Trump, four years ago: second-place in Iowa and then a sweep of Nevada, New Hampshire, and South Carolina. Trump finished February clearly favored for the nomination; Sanders may be in such a position even now.

Three days after South Carolina is Super Tuesday, which awards more than a third of all the pledged delegates. If Sanders is within striking distance of Biden in South Carolina, it probably suggests that Sanders is competitive enough with African Americans in the six other Southern states that vote on Super Tuesday, all of which have substantial African-American populations, but only one of which (Alabama) will have a majority-black electorate.

Recent polling in some of these states, like North Carolina and Virginia, has shown Sanders very competitive with or even leading Joe Biden and Michael Bloomberg. After getting demolished in the South in 2016, if Sanders can simply prevent anyone else from doing very well in the region, he can build a delegate lead elsewhere. Sanders also probably will run competitively in Amy Klobuchar’s home state (Minnesota) and Elizabeth Warren’s (Massachusetts). We’ll take a closer look at the Super Tuesday states before they weigh in eight days from now, but the overall point is that Sanders should be competitive in all or almost all of those states and very well could end up winning several.

Sanders’ excellent showing among Hispanics in Nevada demonstrated the Vermont senator’s strength among that group of voters after polls suggested such strength. Though our data is based on partial returns (only 60% of the vote was reported by early Sunday evening), the county and congressional district breakdown of the state illustrated this (Map 1). 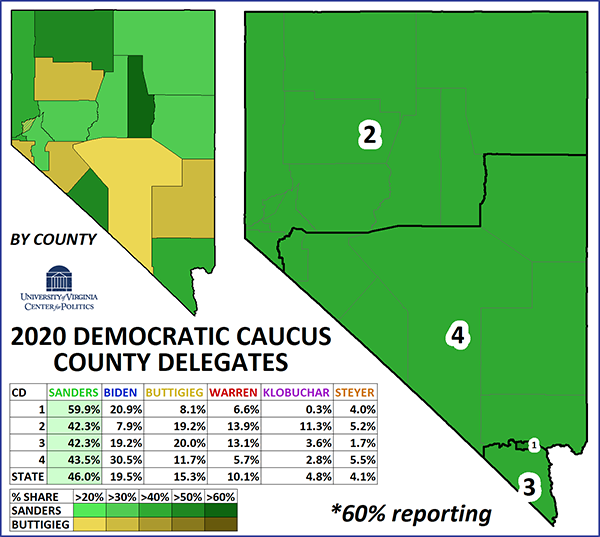 These unofficial returns show Sanders close to earning 60% of county delegates in NV-1, which includes much of Las Vegas proper — by composition, NV-1 has the highest Hispanic percentage share of the state’s four districts.

Though Sanders ended up a clear winner in each of the districts, some secondary threads emerged. For example, NV-4 has the highest black population of the four districts and gave Biden a relatively strong second-place finish. The former vice president also had the endorsement of its congressman, Rep. Steven Horsford (D, NV-4) — with South Carolina voting next weekend, look for Biden to highlight his apparently pending endorsement from House Majority Whip Jim Clyburn (D, SC-6), a key figure in state politics.

Another pattern was Buttigieg’s strength in rural areas — he was the only candidate other than Sanders to carry multiple counties. His campaign targeted rural counties for their outsized share of delegates. It’s unclear how useful that strategy will be in states that employ primaries (most of them), though in the New Hampshire primary, his strength was fairly consistent throughout the state.

Still, given his strength with Hispanic voters, the real potential for Sanders comes in the two states that hold close to half of the Super Tuesday delegates: California and Texas.

Nevada may provide a preview of sorts of California and Texas, in that the two megastates voting on Super Tuesday each have larger Hispanic electorates than Nevada does. At this point it’d be a shock if Sanders lost California, and at least a little surprising if he lost Texas.

Remember, though, an important caveat about California, where Sanders has consistently been leading polls and where a slice of the vote has already been cast: The size of whatever victory Sanders might achieve there may not be clear on Election Night. The later-submitted and later-counted votes in California are often liberal; as we noted a few weeks ago, Sanders significantly gained in later-counted votes four years ago against Hillary Clinton — on election night, Clinton was clearing 60% in the Golden State, but Sanders ultimately held her to 53%-46% win after all the voters were counted. Everyone reporting on the California results in the early going next week should emphasize the incompleteness of the initial vote count.

In order to stop Sanders, his rivals need to aggressively make the case against him at the South Carolina debate Tuesday night. We just saw how this can work: The other candidates ganged up on Michael Bloomberg last week, and they prevented him from getting even a single delegate in Nevada.

Oh wait, actually, Bloomberg didn’t get any delegates in Nevada because he wasn’t even on the ballot there. One can see how the attention paid to Bloomberg — and perhaps his very candidacy — has helped draw eyes away from Sanders’ rise the past couple of months and further splintered the non-Sanders vote. Bloomberg will get his first ballot tests on Super Tuesday, although it is possible that his position has deflated since his debate debacle last Wednesday.

Overall, we can’t necessarily assume that the shape of the race would be much different if the alignment of candidates changed. If Bloomberg or Pete Buttigieg or Elizabeth Warren or Amy Klobuchar or other candidates dropped out today, it’s not a sure thing that their supporters would completely flock to non-Sanders candidates.

Sanders is well-liked by Democrats, and recently he has been leading other contenders in hypothetical one-on-one matchups. An Associated Press-NORC poll conducted in the aftermath of the New Hampshire primary showed Sanders with the best favorability among Democrats of any of the candidates. While Democratic elites are starting to sound the alarms about Sanders and his potential weaknesses against Donald Trump, the Democratic rank and file seems fairly comfortable with him as the nominee.

The other candidates, and party leaders who are worried about Sanders’ ability to lead the Democratic ticket, have precious little time to make Democratic voters as uncomfortable with Sanders as some of them seem to be. Otherwise, he’s going to be the nominee, and Republicans will work to turn Democratic fears about Sanders’ far-left politics into realities.

In a New York Times column published Monday morning, Crystal Ball Managing Editor Kyle Kondik explores whether Sanders, if nominated, would cost Democrats not just control of the presidency, but also the majority in the House. It’s not hard to understand how that could happen, Kondik writes, but there is nuance that’s being lost in some of the Democratic panic.

Also, see this piece from UVA Today’s Caroline Newman about former House Speaker Paul Ryan’s (R) Friday afternoon discussion with Center for Politics Director Larry J. Sabato at UVA. Count Ryan as one of the many Republicans who hopes his party gets to run against Sanders this fall.