— With apparent victories in the Georgia Senate runoffs, Democrats have captured a narrow governing trifecta — control of the White House, Senate, and House.

— Republicans got a sizable Election Day turnout, but Democrats built a big enough lead in pre-Election Day voting to withstand their onslaught.

— Republicans will lick their wounds and look ahead to 2022, when the pendulum often swings against the party in power.

With apparent victories in both Georgia Senate runoffs — our friends at vote-counting service Decision Desk HQ have called both races for Democrats Raphael Warnock and Jon Ossoff over Republicans Kelly Loeffler and David Perdue — Democrats have won their first trifecta in Washington since the 2008 election.

But whereas that election a dozen years ago was a landslide that elected huge Democratic legislative majorities, their victory this time was a collective squeaker, producing the barest of majorities.

This takes nothing away from the Democrats’ achievement, but it does illustrate the competitive era in which we find ourselves.

As this 2020 cycle wraps up, Democrats beat an incumbent president with 306 electoral votes and by four and a half points in the popular vote, and they netted three Senate seats while losing what appears to be a dozen seats in the House compared to what they won in 2018 (one race, NY-22, remains uncalled, and there is a lingering dispute over IA-2, which Republicans won by just six votes).

Joe Biden won 51% of the vote, and Democrats won 51% of the House seats. The Senate is 50-50, but with Vice President-elect Kamala Harris acting as effectively a 101st senator to break ties, the Democrats will have what amounts to a 51-50 Senate majority: 51 divided by 101 is 50.495%. If you’ll forgive us for slightly fudging the rounding, Democrats also have roughly 51% of the Senate seats.

This mirrors the governing alignment following the 2000 election, when Republicans held the White House along with 51% of the House and, for a few months, a 51-50 edge in the Senate (which evaporated when Republican Sen. Jim Jeffords of Vermont became an independent in mid-2001 and joined the Democratic caucus).

This new Democratic trifecta was made possible by Warnock and Ossoff’s narrow, apparent victories.

As of this writing (late Wednesday morning), Warnock was ahead by a little over a percentage point and Ossoff was up by four-tenths of a point. The remaining votes to be counted appear to be Democratic leaning: According to the New York Times’ “needle,” which is projecting the expected final votes, Warnock is on track to win by about two points and Ossoff by about one. This comes after Biden won the state by about a quarter of a point in November.

One surprise in Georgia was that turnout was very high, but that Democrats apparently were able to win anyway. As of the most recent tabulations, there were about 4.4. million votes cast, a number that will grow a little. That is roughly 88% of the total presidential vote — an incredible level of turnout for a non-presidential race, but one befitting the immense stakes involving two Senate runoffs to decide overall control of the Senate.

We wrote yesterday that Republicans needed a bigger share of the electorate to vote on Election Day than in the presidential election, and that they needed to perform better with that group than Donald Trump did in November. They checked both of those boxes, but still came up short.

Let’s focus on the Ossoff-Perdue race, which was closer than the Warnock-Loeffler contest.

Election Day voters as a share of the total electorate were 30% of the electorate, compared to 20% in November, and Perdue won these voters by 27 points, up from Donald Trump’s 23-point margin among these voters in November. The general belief among observers, including us, was that this kind of Election Day edge would be difficult for Democrats to overcome.

However, the Democrats were able to hold on because they built a more substantial edge in the pre-Election Day vote than they enjoyed in November.

The pro-Democratic change in the early in-person vote is shown in Map 1. 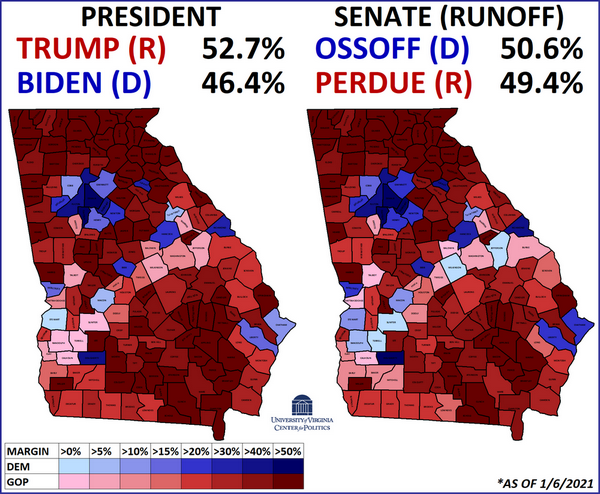 Though both maps are generally similar, a few differences are apparent. In the Atlanta metro area, some of the suburban counties — such as Gwinnett and Henry counties — are darker shades of blue on the right map. In Georgia’s portion of the Black Belt, five counties supported Trump but flipped to Ossoff in the in-person early vote. Though these five are rural, they have relatively high Black populations — one of them is President Jimmy Carter’s home of Sumter County, which is majority Black by composition.

We mentioned yesterday that Black voters were performing better in the pre-Election Day vote for this election than they did in November. This turned out to be one of the biggest stories of the night.

Though the Democratic Party has, broadly, gained with college-educated whites in the Trump area, in the South, energizing the Black vote is still the most important ingredient to winning statewide races. In Louisiana, Gov. John Bel Edwards (D-LA) was reelected in 2019 in large part because of his 84% share in the state’s Black-majority 2nd Congressional District. Though he fared worse with presidential turnout dynamics a few months ago, now-former Sen. Doug Jones (D-AL) won with a similar playbook in 2017.

Yesterday, both Democrats fared worse than Biden in areas of the Atlanta suburbs. Specifically, northern Fulton County (which used to be known as “Milton County”), supported Biden 52%-47% in November, but preferred GOP Senate candidates. In the runoffs, Milton County was a rare area that, in unofficial returns, split its ticket: It was close both ways, but it appears to have voted for Perdue and Warnock — perhaps Loeffler’s having to, necessarily, trek rightward in her primary hurt her standing here.

From a historical perspective, Milton County being essentially tied represents a strong performance for Democrats — until recently, it routinely voted 2:1 Republican — but compared to the presidential topline, the result there for Democrats seems a bit underwhelming. That both Democrats will still likely beat Biden’s overall margin in the state despite their slippage with the white suburbanites there speaks to the strong support they inspired with Blacks. Indeed, on the other end of the Atlanta metro area, Clayton County, which is roughly 70% Black, swung several percentage points to Democrats from November.

Kabir Khanna of CBS News found that turnout ran a little lower in counties with higher percentages of white voters who do not hold a four-year college degree, counties that make up the GOP base. So, again, while the partisanship of the states are a lot different, there are some parallels between Democrats’ most recent victories in Alabama, Louisiana, and Georgia: They were all driven by strong Black turnout and not-so-strong white working class turnout. These sorts of patterns show up on Map 2.

Map 2: Runoff turnout as a percentage of November turnout 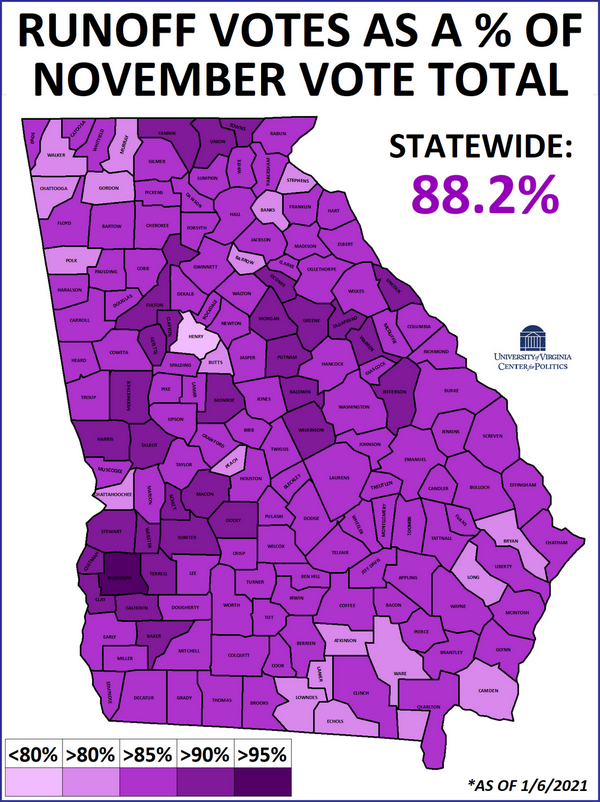 Henry County, south of Atlanta, was only 90% reporting at the time of this writing, but generally, northwestern and southeastern Georgia — where some of the most heavily GOP counties in the state are located — saw the sharpest turnout drops from November. In the northwestern corner of the state, the 14th Congressional District, an overwhelmingly Republican seat held by far-right Rep. Marjorie Taylor Greene (R, GA-14), only cast about 85% of its November total, a few percentage points under the statewide 88%. With the contests as close as what we saw yesterday, those types of seemingly minute underperformances added up for the GOP. The relatively high turnout drop in GA-14 was also notable because Trump was in the district on Monday, where he held his final pre-election rally as the sitting president.

By contrast, turnout was relatively strong in several southwestern counties. Randolph County, which sits in the heart of the region, was the only county that turned out at over 95% of its November total. As a Black preacher, Warnock may have been a uniquely good fit for there: Randolph County is 60% Black, and in the House, the area is represented by Rep. Sanford Bishop (D, GA-2), a moderate member of the Congressional Black Caucus who often brings up his Baptist faith on the campaign trail.

It is not too surprising that Warnock performed a little bit better than Ossoff. Warnock faced Loeffler, an appointed incumbent, while Ossoff faced Perdue, an elected incumbent. We know from history that elected incumbents generally have more of an incumbency advantage than appointed incumbents, so perhaps this helped Perdue do a little better than Loeffler. Warnock probably also is a more compelling candidate than Ossoff, and the presence of a Black candidate on the ticket very likely contributed to the stellar Black turnout.

The differences between the two races were not huge, although under slightly different circumstances, we could have seen a split decision, with both Warnock and Perdue winning (thus saving the GOP Senate majority).

The results we saw in Georgia yesterday are more evidence that presidential and senatorial races are becoming more correlated. Both Ossoff and Warnock won by carrying the same 30 counties that Biden did in November. Looking nationally, of the 35 senators elected this cycle, Sen. Susan Collins (R-ME) was the only senator to win a state that voted for the other party’s presidential nominee.

Given the close outcomes in Georgia, any number of factors could have tipped the races the other way. It seems reasonable to suggest that if Trump had accepted his presidential loss, Republicans could have more easily made the Senate runoffs a referendum on unified Democratic control of Washington and perhaps generated a bit more crossover support to have held the seats, and the Senate. After all, Republicans did finish ahead of Democrats in the initial voting in both Senate races back in November. We doubt that the president’s late-breaking support of $2,000 stimulus checks helped the Republicans, either, as it immediately threw cold water on the $600 stimulus checks that Congress approved in advance of the election.

However, asking Trump to behave gracefully in the aftermath of the election would be like asking a vegan to eat a T-bone steak — it just wasn’t going to happen. So Perdue and Loeffler stuck with the president, and they almost squared the circle anyway.

The United States’ political pendulum never stops swinging. The Democrats have the most fragile of Senate majorities, which could be upended at any time by a surprising development (death, resignation, party switch, etc.).

Republicans can look ahead to the 2022 midterm, when they can run promising a check on unified Democratic control of Washington, a message that often appeals to a midterm electorate.

Warnock will be on the ballot again in two years; so too will Sen. Mark Kelly (D-AZ), one of the Democrats’ other 2020 majority-makers.

But for now, the Democratic victories in Georgia give President-elect Joe Biden more breathing room for getting his Cabinet and judicial appointments through the Senate and for pursuing his legislative agenda.

A 51% trifecta is not an overwhelming trifecta, but it’s a trifecta nonetheless.