Skip to content
Home
/
The Different Ways of Expanding the House

— A 1929 law capping the House at 435 representatives has made the number of constituents each House member represents grow larger every census, which has created a discrepancy between small and large states.

— The only framework in the Constitution is that each state is entitled to at least one seat in the House; any maximum or allocation method is set by law (which means it can be amended or repealed).

— Each House delegation can be made representative of the population based on an equal number of residents per district or as ratios to the smallest state, its Electoral College votes, or in terms of the overall popular vote.

With the 2020 census results out, we now know where the balance of power will be once the 118th Congress assembles in January 2023. Southern and western states generally gain power at the expense of Rust Belt and northeastern states. Because the House is arbitrarily capped at 435 members, it means that every time the census is taken, there’s a game of musical chairs that determines which states gain more representation in Congress and which lose, depending on how their populations grew relative to the nation in the previous decade. Texas, for example, has seen explosive growth and has been the top seat gainer since 2000, earning two seats in 2000, four seats in 2010, and two seats in 2020. But that growth has been at the expense of states like New York, which in the same Census years lost two seats in both 2000 and 2010, and one seat in 2020.

This means that states end up with more residents per representative than other states. Using the 2020 census results, Montana’s two House members will each represent about 543,000 people apiece; on the other side of the spectrum, Delaware’s single member will represent all 991,000 people. So how can the House truly represent the state populations?

First, it’s important to bear in mind that current House membership stands at 435 because of a law passed in 1929 (the Reapportionment Act of 1929), which caps the number at 435. There is no constitutional provision that dictates the maximum number of representatives that the House can hold. The other thing to remember is that states are meant to be equally represented in the Senate with each one sending two senators; in the House, however, the argument was to have the chamber represent the population in general. As states were admitted, new seats were gradually added to account for the population growth. The last time seats were added were for Alaska and Hawaii when they attained statehood and each had a single seat, increasing the House to 437. However, the House reverted to 435 after the 1960 census and has remained static ever since.

The obvious solution is the simplest one, though in today’s polarized environment, it may not fly so well because it will require the Senate to pass it too: increase the size of the House by repealing the 1929 law and passing a different one that either sets a higher number or lets the total float. For the former, representatives can pass a law along the lines of a Constitutional amendment yet to be ratified by states that sets a minimum number of residents that each representative can represent in the House. The number, however, is arbitrary (exactly who and what determines it?), so it may be more controversial. The flipside of such a number is that even Wyoming, the smallest state by population, could stand to gain seats (though that will likely imply a big House membership). The table below (Table 1) shows different arbitrary numbers that can be used for House representation. The smaller the number of constituents per representative, the larger the total House membership will be. 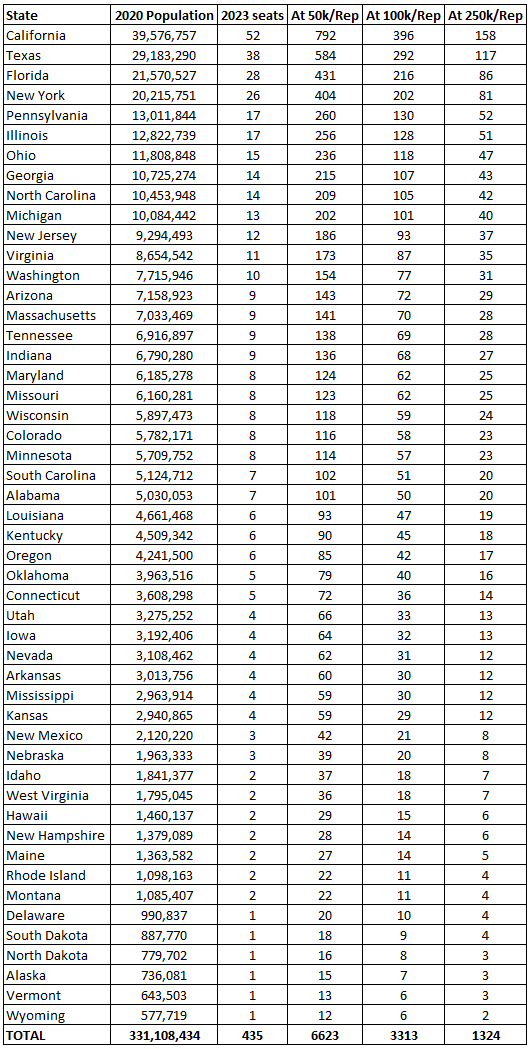 If not an arbitrary number, then a floating number can help solve the problem. Floating, in this case, means that the number is not static; it changes depending on the circumstances. As an example, the number of people at an airport at any given day is a floating number; if you counted all the people at different times of the day, the number will change depending on how many flights there are and how many people booked flights for that day. In the case of the House, making the House membership as a ratio to the smallest state is a floating number scenario: every 10 years, the ratios will change based on how much each state grew, and how much it grew when compared to the smallest state.

The Constitution dictates that each state shall have at least one representative, which means the smallest state (Wyoming for the time being) can be expected to always have a single seat no matter what. Following this example, each state’s delegation can be construed as a ratio to Wyoming’s population (this is also informally known as the Wyoming Rule). With the 2020 Census results, California has about 69 times the population of Wyoming; as such, California would have 69 seats compared to Wyoming (69:1 ratio); Texas has around 51 times Wyoming’s population, so it can be assigned 51 seats (51:1) and so on. Of course, under this scenario, some states will miss out on adding additional seats to what they already have, but it helps balance out the more populated states against the least populated ones. In addition, it would mean that admitting new states would not result in state delegations growing smaller because each state is represented as a proportion. If, for example, Puerto Rico were to attain statehood, the House would grow by five seats and accommodate the five seats it would be entitled to (4.69:1 ratio, rounded to the nearest integer).

The following table reflects how the Wyoming Rule would pan out, with each seat representing roughly the same number of residents as Wyoming. North Dakota, Alaska, and Vermont would miss out on adding a seat and would be the most underrepresented, though none as drastic as the current situation (Delaware versus Montana, as described above). The House membership would stand at 573 members in the next Congress, but would change with every census, or with the admission of new states. 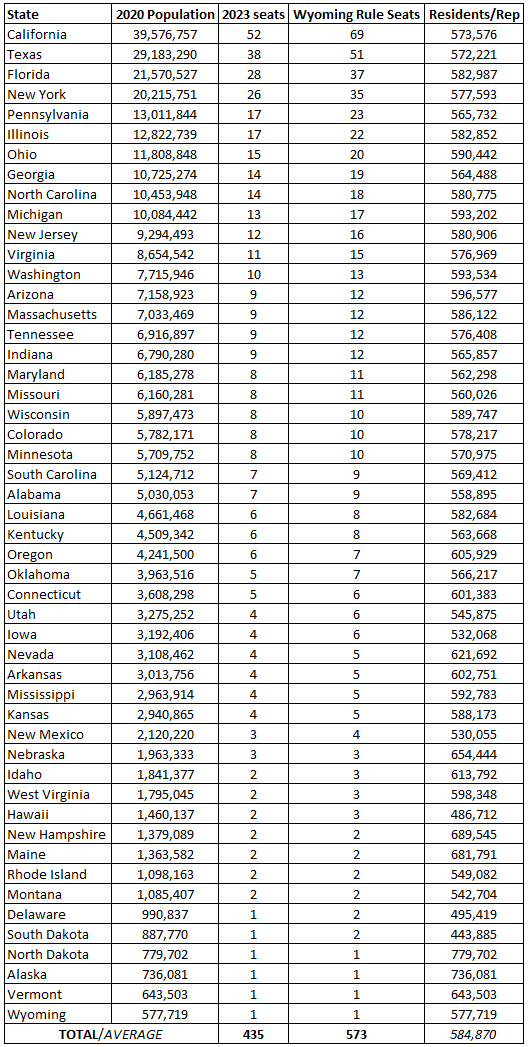 Growing the House size also introduces another potential hurdle: how many people are represented by each Electoral College vote? Once again, because the Constitution guarantees that every state will have at least one representative and two senators, it means the smallest state is guaranteed three votes in the Electoral College. With the current House membership, it means the electors of every state represent very different numbers of people. In the extremes, about 733,000 Californians are represented per each electoral vote; meanwhile, about 192,500 Wyomingites claim each of Wyoming’s three votes. The House can therefore be set so that, after excluding the two votes each state gets because of its senators, each Electoral College vote represents roughly the same people (it would employ the same principle as the Wyoming Rule in the previous example). Such a House would have 1,622 members, and would skew towards underrepresenting smaller states in the House, though they’d make up for it by having the opposite situation in the Senate, where their senators represent fewer constituents and thus overrepresent them when compared to more populous states.

The following table dives into this scenario. The third and fourth columns depict the current situation: the Electoral College as it will be for this decade’s two presidential elections. Columns 5 and 6 show a “Wyoming Rule” of Electoral College electors; that is: every state’s electoral vote will represent, on average, the same number of people as each vote from Wyoming. The final two columns subtract two votes (which represents the two senators) and leaves us with how many representatives each state is entitled to, and how many constituents each one represents. 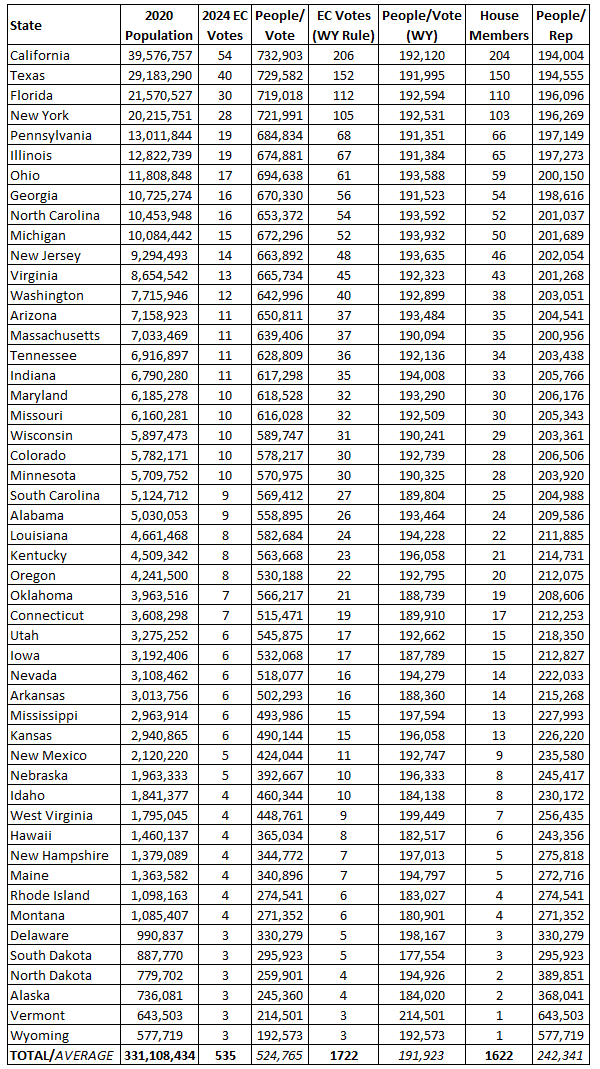 Another way to address representation irregularities is embracing an alternate allocation method whereby the House membership is doubled, with half the membership coming from districts (as it is now), but the other half being awarded proportionally to the total vote obtained. This second half can be kept as at-large members, with parties submitting a list of people they want to fill those seats as they obtain them, with the end result that the House membership will represent the voters’ preference. Some parliamentary systems use this method, also called Mixed Member Proportional (or MMP, for short). The basis is that each voter makes two votes: one for their district representative and one for the party they support.

This would severely negate the effects of gerrymandering, as each vote will count for the total House membership, not just for the district. Democrats in ruby-red Wyoming and Republicans in deep-blue Massachusetts may be enticed to cast a vote even if their candidate doesn’t win in the district, because their vote will also determine the at-large membership. This would also allow third parties to field candidates and enter the scene: Green and Libertarian voters, cognizant of the fact that their candidates will likely not win their districts, will vote strategically for one of the main parties for their local representative, but still list their party preference in the hopes that a few of the at-large membership seats are allocated to them.

The following figure shows how the House would be populated based on the 2020 House of Representatives election results under MMP rules. The seats without the dark outlines (clustered around the center) represent the current 435 House districts; the seats with the dark outlines (towards the edges of the diagram) are the at-large seats allocated to each party so that membership resembles the final voting results. 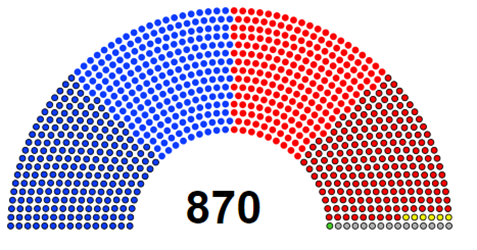 Source: Figure made with Parliament Diagram

For this scenario, and in order to ensure that no state is overrepresented, a rule could be made that bars the at-large members from participating in duties that district representatives are constitutionally bound to carry out (such as voting for president in case of an Electoral College tie or objecting to a slate of electors). It wouldn’t be far-fetched to imagine a scenario where one party purposely pads their list with candidates from states where it holds no seats in order to gain control of the delegations so while these at-large members enjoy immunity from state politics, they lose their right to represent them in the House. Because they don’t answer directly to the electorate, they could be term limited to discourage perpetual service. Such a system would also keep the Electoral College intact since no state delegation would change (though it wouldn’t address the problem of how smaller states are overrepresented versus larger states).

There are other solutions that vary in complexity and would require constitutional amendments (having districts cut across state lines, for example). And this all assumes that Americans everywhere are willing to have more people on the federal payroll. But as things stand right now, the best path forward to a more representative House is to repeal the 1929 law that caps the size, and decide whether the number should be static and set by law or allowed to float as well as whether each House member or each Electoral College elector should represent roughly the same number of constituents.