Skip to content
Home
/
The Electoral College in the 21st Century

— The United States is in an extremely competitive era of presidential elections.

— In the 6 elections this century, the popular vote margin has been less than 5 points in all but 1 of them.

— Many of the states have been consistent in their presidential voting since 2000, although there have been key shifts that have altered the roster of most competitive swing states.

— Relative to the nation, much of the West has become more Democratic over the past 2 decades, along with some other pockets of the country, while many states in the Northeast, Midwest, and Greater South have become more Republican.

A brief recent history of the Electoral College

At some point, either the Democrats or Republicans are going to win a true blowout in the Electoral College (and popular vote). But in an era defined by competitive elections, good luck guessing when that next will occur.

The United States has now had 9 presidential elections in a row (beginning in 1988) where neither side has won by a double-digit margin in the popular vote. That is the longest streak in the history of the current 2-party system (Democrats vs. Republicans, which dates back to just before the Civil War). While some elections in that timeframe — 1988, 1996, and 2008 — were still decisive victories for one side or the other, there have been some true nail-biters, with 2000 as the closest in terms of the Electoral College vote and the winning margin in the decisive state (just 537 votes out of nearly 6 million cast in Florida). Republicans won a pair of presidential elections (2000 and 2016) despite not winning the popular vote — 2 other such “misfires” happened in the late 1800s (1876 and 1888), the last time period where there have been many relatively close presidential elections in a row. Since 2000, the popular vote margin has been less than 5 points in 5 of the 6 elections, with only 2008 as an exception. This does not quite match the 6 elections between 1876-1896, when every election had a margin of under 5 points, but it’s close.

The current alignment of the Electoral College has arguably been in effect since 2000, in that there were several changes going from the 1996 to 2000 elections that have endured even as the respective party coalitions have evolved in subsequent elections. Let’s take a quick visual tour through the Electoral College from 1996 to 2020 to see how things have changed. (Our source for all results is Dave Leip’s Atlas of U.S. Presidential Elections.) 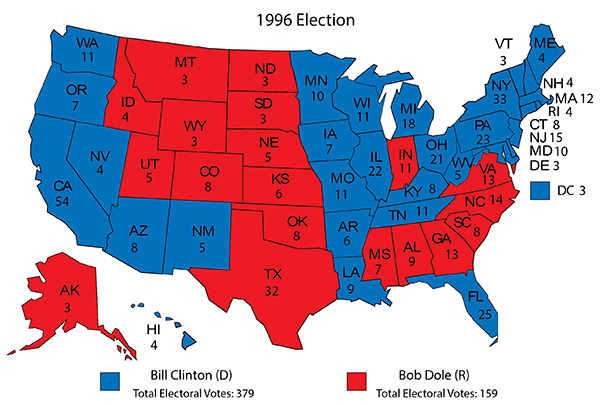 Bill Clinton’s second victory produced both a popular vote (8.5 points) and Electoral College (220) margin bigger than any we have seen in either category since. Clinton won a half-dozen states that have not voted Democratic in any of the presidential elections since, all in what one could consider as either Southern or as Border states: Arkansas, Kentucky, Louisiana, Missouri, Tennessee, and West Virginia. Despite his loss, Republican Bob Dole carried Colorado and Virginia, 2 states that have now become solid parts of the Democratic federal coalition.

In the 1990s, some of the trends we have become accustomed to were taking hold. In 1992, Clinton only got a majority of the vote in his native Arkansas (excluding the District of Columbia) — by 1996, he got a higher share in 6 other states. Several of those other states were in the Northeast, which, along with the West Coast, has been solidly blue in the 21st century. Much of the Great Plains and northern Interior West states were and are red. Indiana was Dole’s only victory in the states that touch the Great Lakes; the Hoosier State remains the most Republican of those states today. 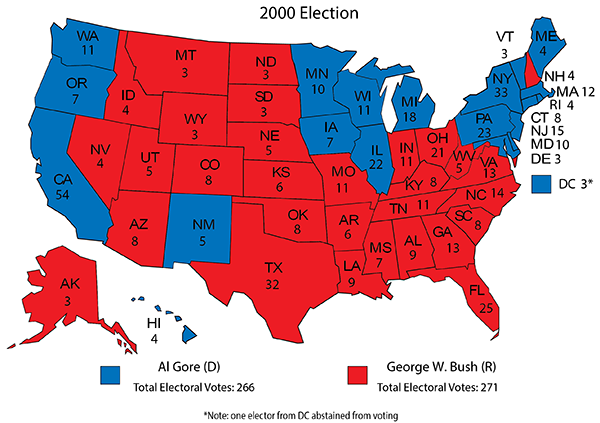 George W. Bush swept the South in 2000 and won a narrow Electoral College victory. Gore’s showing in Florida, despite his agonizingly narrow loss there, was stronger than any Democrat since: Florida voted very close to the national popular vote in 2000 but has since voted at least a couple of points to the right of the national vote. Despite Bush’s win, the Democrats retained much of the Great Lakes turf as well as the whole West Coast and nearly all of the Northeast. New Hampshire voted for Bush, the last time a Republican would win a state northeast of New Jersey. After a brief dalliance with Democrats in 1996, Arizona reverted back to being Republican — at the time, 1996 was the only time the Grand Canyon State had voted Democratic for president since 1948. 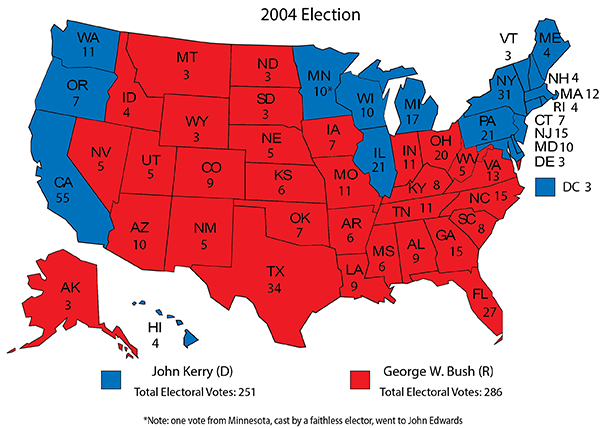 Bush’s second victory was substantially similar to his first victory, although there were a few changes. Bush, a Texan, flipped New Mexico, while Democratic nominee John Kerry, from Massachusetts, also flipped a neighboring state, New Hampshire. Iowa, one of the closest states of 2000, became the third state to change hands in 2004, narrowly flipping to Bush. This was the last time the now-lapsed bellwether state of Ohio was truly decisive in the election. Kerry actually did very slightly better there than he did in the national popular vote, one of the relatively few times Democrats have run better in Ohio than they did nationally. Had Kerry won Ohio, he would have won the election even if nothing else had changed. But Bush won Ohio by 2.1 points as part of a 2.5-point national popular vote victory — the most recent time a Republican won the popular vote. 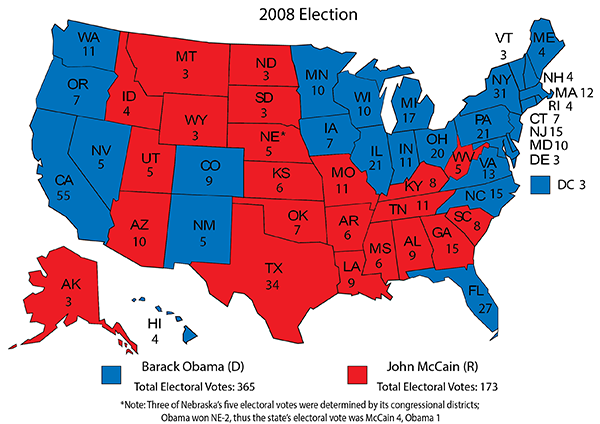 Barack Obama won a victory similar in size to Clinton’s 1996 win — the then-Illinois senator won the popular vote by 7.3 points and the Electoral College by 192. He failed to win back any of those half-dozen southern-ish states mentioned in the 1996 section as having voted for Clinton — in fact, he performed worse in several of them than Kerry had 4 years earlier. Obama barely lost Missouri, which formally shed its old bellwether status in this election and has sped to the right since. But Obama won a handful of states that didn’t vote for Clinton in 1996: Colorado and Virginia, which have since solidified as Democratic-leaning states, and Indiana and North Carolina, which Democrats have failed to carry since. 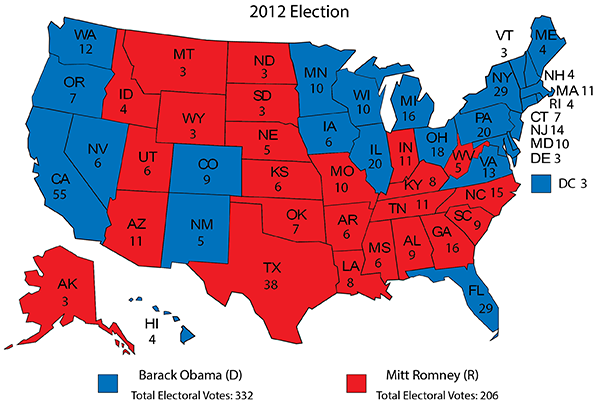 Obama fell off some in 2012, winning by just 4 points in the popular vote and shedding Indiana, North Carolina, and the single Electoral College vote he had won in Nebraska’s 2nd District (there is more on the 2 states that award some of their votes by congressional district, Maine and Nebraska, below). Otherwise, the results were identical to 2008. 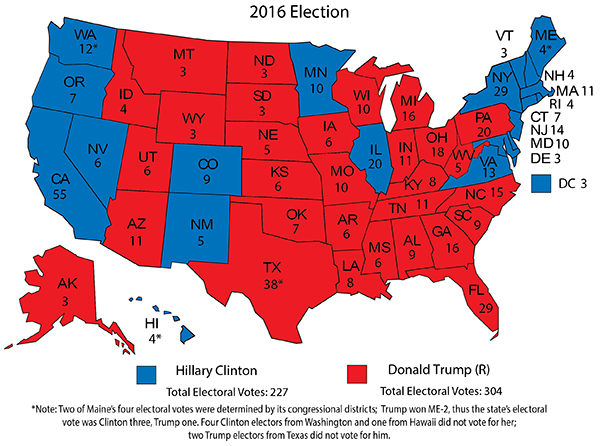 In his victory, Donald Trump became the only Republican in the 21st century to carry 3 key Great Lakes states: Michigan, Pennsylvania, and Wisconsin. He also pushed a couple of heartland states, Iowa and Ohio, from swing state to leaning Republican status. That said, a handful of non-Midwestern states that had voted once or twice for Bush but also twice for Obama remained blue: Colorado, Nevada, New Hampshire, New Mexico, and Virginia. 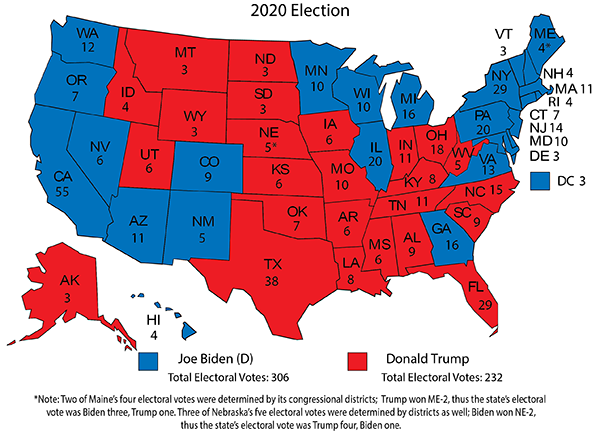 Joe Biden defeated Trump by winning back the Great Lakes battlegrounds of Michigan, Pennsylvania, and Wisconsin. He also flipped a couple of typically Republican Sun Belt states, Arizona and Georgia, that had not voted for Obama in either election and had each only voted for Clinton once apiece.

As we look ahead to 2024, remember that we have gone through another reapportionment cycle following the 2020 census. So the electoral vote allotments have changed slightly. California, Illinois, Michigan, New York, Pennsylvania, Ohio, and West Virginia all lost a single electoral vote; Texas gained 2, and Colorado, Florida, Montana, North Carolina, and Oregon added a single vote apiece. Had this allocation been in place in 2020, the Electoral College would have been 303-235, for a slightly smaller Biden edge. That new allocation is shown in Map 8; Maps 9 and 10 also include the new Electoral College vote tallies. 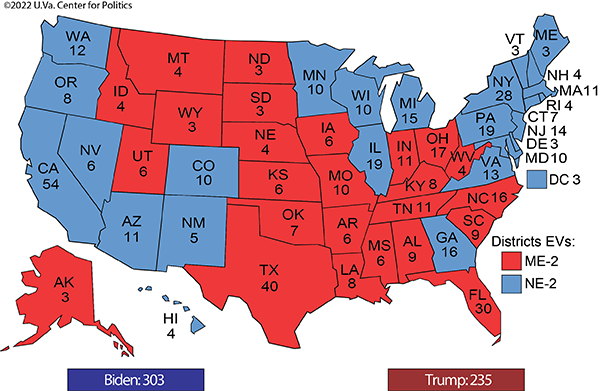 How the states have changed 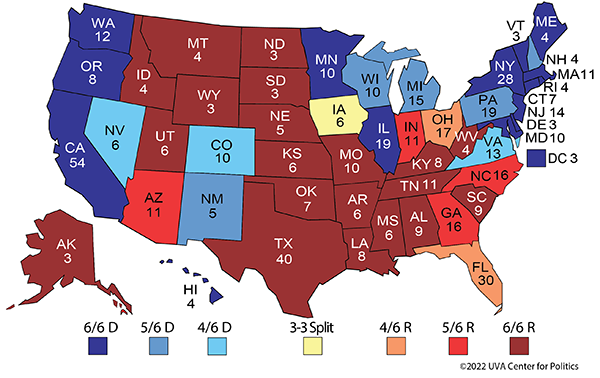 Interestingly, and despite the 3-3 split over the past 6 elections, only a single state has split 3-3 in that same time period: Iowa. But the state’s rightward turn suggests that it likely will not be a true battleground in 2024. The same is true of the only 4/6 Republican states on this map: Florida and Ohio, both of which have also taken a turn right in the Trump era. At the same time, many of the 5/6 states (both Democratic and Republican) appear likely to be the top battlegrounds in 2024. Seven states were decided by less than 3 points in 2020: Michigan, Pennsylvania, and Wisconsin, all of which have voted Democratic in all but 1 of the presidential elections since 2000; Nevada, which has voted Democratic in 4 of those 6 elections; and Arizona, Georgia, and North Carolina, all of which have voted Republican in 5 of these 6 elections. Indiana is decidedly the least competitive of either party’s 5/6 states — aside from 2008, when Obama’s Midwestern appeal and a huge campaign resource advantage likely helped him carry it, it has not been a top target. Similarly, while New Mexico was hotly contested in the early 2000s, recent Democrats have won there relatively comfortably.

One other way of looking at this is to see how the states have trended over the past 6 elections relative to the nation. Map 10 compares the change in what we call the “presidential deviation” from the 2000 election to the 2020 election. There is a longer explanation in this past Crystal Ball story if you want a fuller description, but here’s how it works in a nutshell: 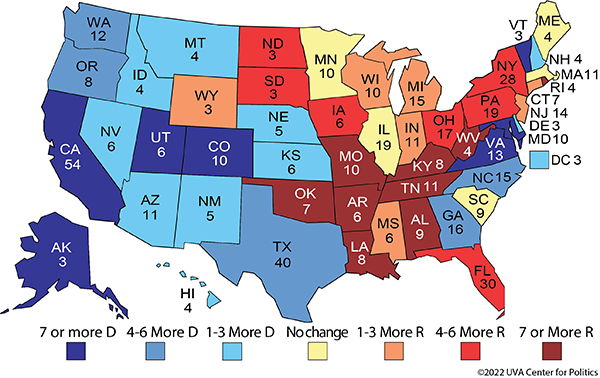 Notice that the western half of the country has largely moved left relative to the nation over the course of the last 2 decades, while much of the Northeast, Midwest, and Border state areas have shifted right. That doesn’t mean, obviously, that New York is gettable for Republicans or Utah is gettable for Democrats, for instance, despite the relative trends in each state. But it does help show the direction of some of the key states, like Arizona and Georgia, shifting from clearly Republican to swing states, as well as Republicans becoming relatively stronger in the key states of the Midwest.

Maine’s lean has been unchanged in Map 10, but its internal movements have had Electoral College implications — along with Nebraska, it splits its electoral votes, awarding some by congressional district. For the first 4 elections in this timeframe, both Maine districts voted Democratic for president. But its rural 2nd District has voted Republican since 2016, giving the GOP an extra electoral vote. In Nebraska, Democrats have benefitted from the split allocation in a couple of recent elections, as the Omaha-based NE-2 voted for Obama in 2008 and Biden in 2020.

The trend in each state over the past 2 decades shown in Map 10 adds a little bit of context to the overall voting records displayed in Map 9. Of the closest states in 2020, Michigan, Pennsylvania, and Wisconsin of the Great Lakes region have all gotten redder relative to the nation over the past 20 years despite voting Democratic in 5 of the past 6 elections. Meanwhile, the most electorally competitive states in the South and West — Arizona, Georgia, Nevada, and North Carolina — have all gotten bluer, even as Nevada is the only state among them to vote more often for Democratic presidential candidates in the past 2 decades.

How these states vote — and trend — in 2024 will help determine both the next election and the ones that follow.