— With the exception of a brief stint in 2009-2010 enabled by a string of improbable Democratic victories, no party has commanded a filibuster-proof majority in the Senate since the 1970s.

— Given the current partisan composition of the states, it seems nearly impossible for either party to gain 60 seats for the foreseeable future.

— The Republicans, absent any major proposals needing 60 votes, lacked an incentive to end the filibuster in 2017. The Democrats, in contrast, have several such proposals heading into 2020.

Is the end of the filibuster near?

With hopes of winning full control of Washington in the 2020 election, Democrats have proposed bold ideas from Medicare for All to the Green New Deal. Fearing potential roadblocks, some have sought structural changes to American politics recently, calling for abolishing the Electoral College, packing the Supreme Court, and radically transforming the composition of the Senate. However, perhaps the easiest-to-overcome procedural roadblock to progressive policy objectives is the filibuster in the U.S. Senate, which future Senate majorities could end with a majority vote. Ending the filibuster has been mentioned by Democratic presidential candidates such as Gov. Jay Inslee (D-WA) and Sen. Elizabeth Warren (D-MA), as well as former Senate Majority Leader Harry Reid (D-NV).

Of course, the Democrats (or Republicans) could overcome the filibuster by winning the requisite 60 Senate seats needed to invoke cloture.

But, as will be explored in depth below, there have been very few filibuster-proof majorities in recent decades, and there seems to be no realistic path for either party to get another one any time soon.

The filibuster has been a feature of the United States Senate since the nation’s early days. If a senator can talk ad nauseam, a piece of legislation will never come to a vote and thus fail. However, the Senate has slowly been weakening the filibuster’s power over the years. Initially, the Senate allowed unlimited debate, effectively requiring unanimous consent to vote on any bill, as any member could individually hold up a bill by launching a filibuster. However, in 1917, then-President Woodrow Wilson, annoyed at much of his legislation stalling and pressed by an impending entry into World War I, convened a special session of Congress, in which the Senate enacted Rule 22, enabling a two-thirds majority of the body to end debate and proceed to the vote. This threshold was further reduced in 1975 to three-fifths.

Ironically, while it takes 60 votes to kill a filibuster, it would only take 51 to stop filibusters forever, as it could be changed as a part of the Senate rules, which only requires majority support, every two years.

Thus, it may be only a matter of time until the practice ends for good.

It has been increasingly rare in recent years for a single party to command a 60-seat filibuster-proof majority in the Senate. In fact, since the end of the 1970s, it has only happened once: For a brief period from July 2009 to February 2010, Democrats held 60 seats. However, it was a very tenuous hold, only solidifying after Sen. Arlen Specter of Pennsylvania switched parties and Al Franken (D-MN) was declared the victor of a razor-thin Minnesota Senate race. Furthermore, the Democrats held many seats they likely would not have much of a chance to win today, including both seats in Arkansas, Montana, North Dakota, and West Virginia as well as a seat apiece in Alaska, Indiana, Louisiana, Missouri, and Nebraska.

Looking ahead, does either party have a reasonable path to 60 seats in the Senate? Probably not.

I find it useful to divide the states into six groups, shown in Table 1 and Map 1: the Dominant Democratic, the Ruby Red Republican, the Swinging Sun Belt, the Bush-to-Blue, the Moving Midwest, and the Non-aligned New England. Going through these regions will help illustrate the challenges both parties face in trying to win a filibuster-proof Senate majority. 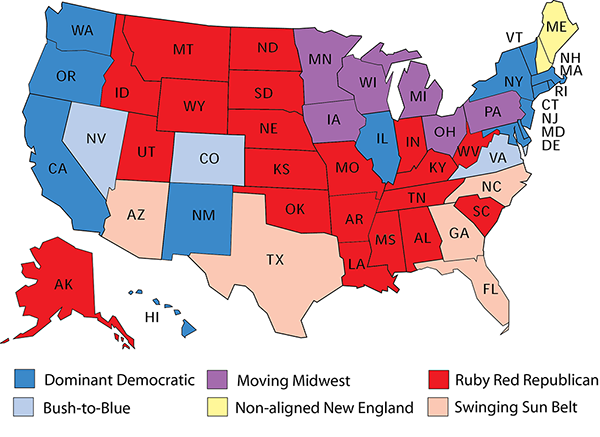 Note: Categorizes independent Sens. Angus King (ME) and Bernie Sanders (VT) as Democrats because they caucus with the Democrats.

The Dominant Democratic category includes the 14 states where Democrats can be expected to win consistently with little real opposition. Since 2003, only two Republican senators have won elections in these states, both in 2010. Scott Brown (R-MA) faced a disastrous opponent in state Attorney General Martha Coakley (D-MA) and eked out a close victory in the January special election. Mark Kirk (R-IL) also squeaked by in a Republican wave year. Neither man was reelected, and the Democrats now enjoy control of every seat in this category.

The Ruby Red Republican category encompasses the 20 states which are heavily Republican and show no sign of changing any time soon. In 2009, 14 Democratic senators hailed from these states. Now, only three — Sens. Doug Jones (D-AL), Jon Tester (D-MT), and Joe Manchin (D-WV) — remain, with Jones on very shaky ground going into 2020. While both Tester and Manchin were reelected last year, both men faced subpar opponents and won by less than four percentage points in a Democratic wave year. Every cycle, seemingly credible challengers in these states emerge but often fail spectacularly. In 2014, they were Kentucky Secretary of State Alison Lundergan Grimes and Kansas’ Greg Orman (who ran as an independent). Two years later, former Sen. Evan Bayh (D-IN) and then-Missouri Secretary of State Jason Kander (D) came up short. And in 2018, former Gov. Phil Bredesen (D-TN) lost a highly publicized race by double digits. Democratic underperformance in this group of states represents the party’s greatest challenge to the elusive 60 seats.

States in the Swinging Sun Belt category are growing and usually conservative states that have become more competitive for the Democrats in recent years. All of these states, with the possible exception of Florida, have been consistently moving to the left year after year. However, Republicans currently enjoy a 9-1 advantage in the Senate seats here. Thus, while Democrats certainly have potential in this group, it remains to be seen when and how effectively Democrats will be able to capitalize on it. Senate elections in Florida and North Carolina are frequently competitive, and the 2018 midterm elections saw competitive Senate elections in both Arizona and Texas (Democrats narrowly won Arizona, accounting for their single senator in this group, but narrowly lost Texas). The 2020 election, which features Senate races in four of the five states in this category, will offer a key hint to the partisan future of this group.

The Bush-to-Blue states were typically more Republican than the nation but switched from red to blue in 2008 and never looked back. As recently as 2004, Republicans held five of the six Senate seats in this category. Now, the numbers are flipped, with Sen. Cory Gardner (R-CO) as the only Republican in this category, and he should have a very hard race in 2020. However, Republicans may have underperformed their potential here. For example, subpar candidates almost certainly cost them winnable races in Nevada and Colorado in 2010, and former Republican National Committee Chairman Ed Gillespie (R-VA) found himself underfunded in his nearly successful challenge to Sen. Mark Warner (D-VA) and came up just short in 2014. Regardless, Republicans are on the decline in this category but outside chances of success still exist.

The Moving Midwest states represent areas with high concentrations of working-class white voters, who have been shifting to the Republican Party since 2010. After Barack Obama twice carried every state in this category, Donald Trump flipped all but Minnesota, and his loss there was very narrow. Senate Democrats currently hold a narrow 7-5 majority of the seats here, a noticeable drop from the 10-2 majority they held in 2009. Democrats swept the region’s Senate races in 2018 amidst a favorable national environment, but still underperformed expectations in Michigan and Ohio. While the short-term future here is murky, the long-term picture seems to favor the GOP, further imperiling Democratic chances at reaching 60 seats.

The Non-aligned New England states of Maine and New Hampshire are outliers. Historically Democratic Maine has been drifting to the right recently. New Hampshire has been a swing state and seems unlikely to lose that status in the near future. Both of New Hampshire’s senators are Democrats while Maine’s delegation is split between an independent who caucuses with the Democrats and a moderate Republican, Sen. Susan Collins, who may not be reelected in 2020. In the short term, Democrats seem to have the advantage, as both of New Hampshire’s senators are personally popular, and Maine has not yet drifted into swing state status. The long-term picture here is decidedly less clear.

Now we will at last consider the Democratic path to 60 seats. We start by gifting them all the seats in the Dominant Democratic and Bush-to-Blue categories, along with the four seats in Maine and New Hampshire, for a total of 38. To get the remaining 22 seats, Democrats would either need to completely sweep both the Swinging Sun Belt and the Moving Midwest or pick off enough Ruby Red Republican seats to make up for any losses in those categories. While possible, this remains unlikely barring a major political realignment.

The Republicans don’t fare much better. The Ruby Red Republican states start them off with 40 seats, necessitating 20 from the remaining categories. The battleground categories of the Swinging Sun Belt and the Moving Midwest collectively command 22 seats, so Republicans would need to nearly sweep these states, possibly supplementing losses with upset victories in Bush-to-Blue states or New Hampshire. While possible, and easier to reach than the Democrats’, this path remains unlikely in an age of large partisan swings between elections where every midterm seems to be a wave one way or the other. Hypothetically, Republicans may have had a shot at 60 seats in 2018 if Hillary Clinton had won the White House — they would have needed to net eight seats, which would have been a possibility on last cycle’s Senate map with the Democrats holding the usual presidential midterm handicap — but even if they would have done it, Clinton still would have held veto power over any Republican grand legislative designs.

In 2017, when Republicans had full control of both Congress and the presidency, the party lacked any legislative priorities requiring a filibuster-proof majority. Their two main initiatives, repeal of the Affordable Care Act and a tax cut package, both could be passed with 51 votes through the reconciliation process (the ACA repeal couldn’t win a majority in the Senate but the tax cuts passed). Thus, eliminating the legislative filibuster would not have advantaged them.

Democrats, eager to pass, among other things, gun control measures, legislation expanding voting rights, and immigration reform, may practically need the elimination of the filibuster to accomplish these and other major goals.

Thus, with an ambitious agenda and little chance at 60 seats, the next time Democrats enjoy full control, they very well may pull the trigger and put an end to the filibuster forever.