Skip to content
Home
/
The Future Shape of the Senate

— What about the class that faces the voters in 2022? Our analysis shows that this class is also favorable to the Democrats.

— If the Democrats manage to seize the Senate majority in 2020, the relatively pro-Democratic map in 2022 could insulate the party somewhat if Joe Biden is elected president and a midterm backlash benefiting the GOP emerges.

— The Democrats will need to run up the score in the Senate in both 2020 and 2022 if they are going to keep the majority past the 2024 elections, when the Republicans benefit from an extremely favorable map for their party.

As the nation gears up for a highly competitive cluster of Senate elections in 2020 — with handicappers rating as many as 10 seats competitive between the parties this fall — it may seem a little crazy to start focusing on the Senate races that will be on the ballot in 2022. But doing so can provide some valuable context about the longer-term partisan balance in the Senate.

As outlined by the Constitution, the Senate is divided into three roughly equal groups, with one of those groups facing elections each cycle. Class II, as it’s known, faces the voters in 2020. Class III faces voters in 2022. And Class I, having just been elected in 2018, will not face the voters again until 2024. (Special elections to fill vacancies can temporarily add to the elections for a given class.)

In recent decades, the partisan leanings of these groups have tended to diverge, putting one party or the other on the defensive each election cycle.

Class I has become the Democrats’ most problematic class.

For one thing, it currently includes 23 Democratic incumbents (if you count Independent Sens. Angus King of Maine and Bernie Sanders of Vermont), compared to just 10 for the Republicans. And even after losing seats in Florida, Indiana, Missouri, and North Dakota in the 2018 elections, the Democrats will still need to defend seats in 2024 in such solidly red states as Montana and West Virginia, as well as seats in the battleground states of Arizona, Michigan, Ohio, Pennsylvania, and Wisconsin.

Indeed, were it not for the pro-Democratic election environments of 2006, 2012, and 2018, the Democrats probably would have lost several of these seats to the GOP already, undercutting any hope of securing majority status in the near future.

The better news for the Democrats is that Class II, which is facing elections this year, is much more favorable to their party.

The Democrats’ only incumbent worries for 2020 are in Alabama, a solidly red state where Doug Jones won a fluky special election in 2017, and possibly Michigan, where the low-profile Gary Peters faces the voters for the first time as an incumbent.

By contrast, the GOP must defend the seats held by Cory Gardner in increasingly blue Colorado, plus seats in presidential battlegrounds such as those held by Susan Collins of Maine, Thom Tillis of North Carolina, Joni Ernst of Iowa, and David Perdue of Georgia. Additionally, appointed Sens. Kelly Loeffler of Georgia and Martha McSally of Arizona are defending their seats in special elections (and their seats will be back on the ballot in 2022).

So if Class I leans Republican and Class II leans Democratic — at least as far as the politics of today go — then what about Class III, the senators scheduled to face the voters in 2022?

In relatively good news for the Democrats, the GOP will once again be playing defense.

Below is a table showing the incumbents of each party who are slated to face the voters in 2022. Only one seat so far is currently on track to come open due to a retirement next cycle — the one held by Richard Burr (R-NC). But other retirements will almost certainly be announced beginning in 2021, and other vacancies could emerge if senators are appointed to a potential Biden cabinet and/or a sitting senator becomes vice president.

Along with each party’s incumbent senators, we’ve noted in this table whether they fall into any “vulnerability” categories.

None of these factors guarantee that an incumbent will be vulnerable, of course. But collectively, they offer a starting point for assessing whether an incumbent could become a potential target. Here’s what the table looks like: 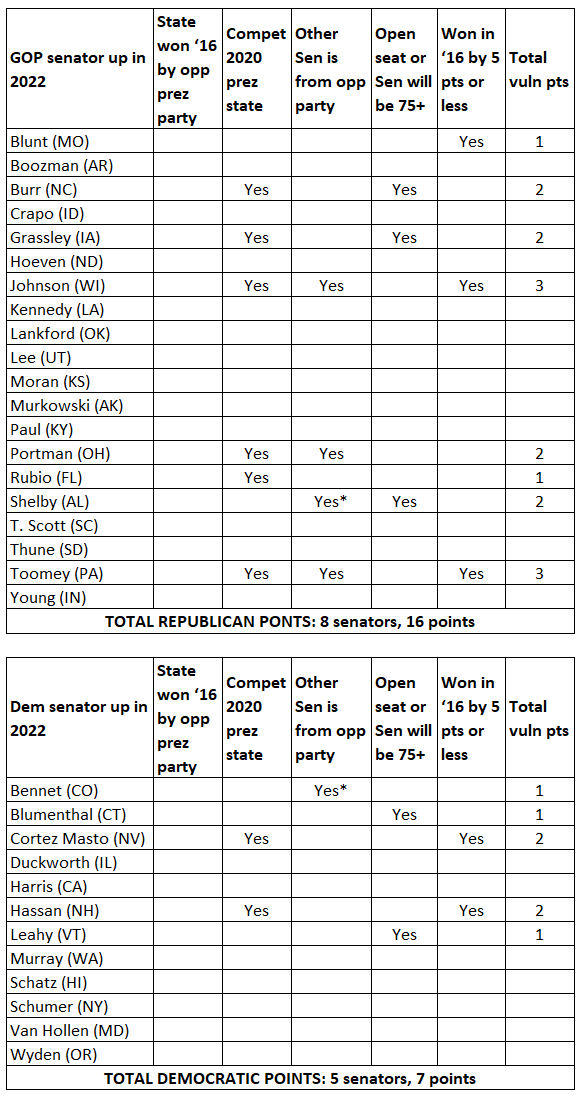 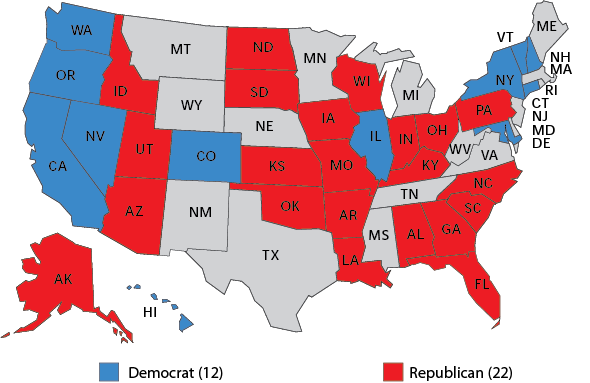 Note that two states have seats up in 2022 that are being contested in competitive 2020 special elections, so their impact cannot be calculated yet: the aforementioned GOP-held seats in Arizona and Georgia. They are not listed in the tables above, although their seats are shaded in Map 1 in Republican red. Depending on who wins this cycle’s special elections, those races would change the partisan calculus.

Still, the way things stand now, the Republicans will likely have more vulnerable turf to defend.

The GOP has eight senators with at least one vulnerability, and 16 total vulnerability points. The biggest targets for the Democrats are Pennsylvania’s Pat Toomey and Wisconsin’s Ron Johnson, with three points each. Similarly, the North Carolina seat that Burr is vacating — he previously suggested he would retire even before he was being investigated for his stock sales during the pandemic — could become an enticing target for the Democrats.

By contrast, the Democrats will have relatively little turf to defend in 2022. The Democrats will only have 12 seats at stake, compared to 20 for the Republicans (setting aside those two seats linked to 2020 special elections). And few Democratic incumbents should be vulnerable, as things look now. The Democrats have only five senators with any vulnerability points, and only seven points total.

For comparison, here’s the equivalent chart for the 2020 races. For this table, we’ve paired the open seat category with appointed senators, rather than senators who are 75 or older; if the incumbent is 75 and still running in 2020, they’re not at risk of retiring and creating an open seat. 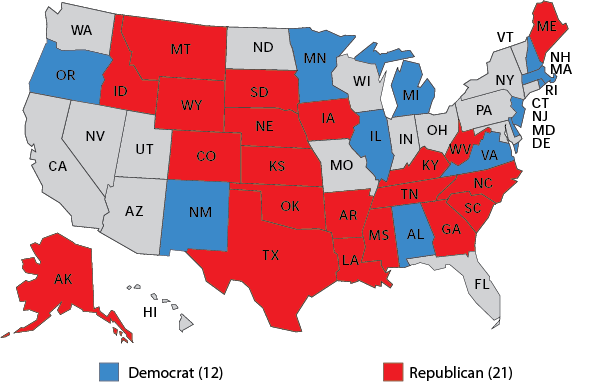 The 2024 election is when the Democrats’ Waterloo could arrive. Here’s how that class looks (though it’s admittedly far out from Election Day): 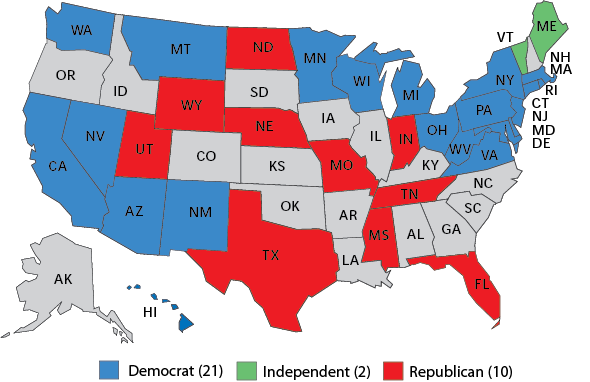 For the class facing the voters in 2024, Republican exposure is minimal. But Democratic exposure is broader than any party in any other class. In this class, Democrats have 16 senators with some vulnerability, with a collective 32 points. Some of the most at-risk Democratic seats are those held by Joe Manchin of West Virginia and Jon Tester of Montana. Several other Democratic incumbents also represent hard-fought presidential battleground states. These Democrats were fortunate to run in 2018 (and some of them in 2012 and 2006). But it’s far from certain that they’ll continue to be as lucky in 2024.

So what does this mean?

If the Democrats manage to take the Senate majority in 2020, which is possible given the GOP’s greater vulnerability this year, they’ll have a leg up keeping control in 2022. Having a favorable map for the second straight cycle could help the Democrats keep the Senate even if Biden wins the presidency and the Democrats face the challenge of a first midterm election under a new president, when the out-of-power party tends to make gains.

If the Democrats come close to taking the Senate in 2020 but the GOP remains in control, the Democrats would have a second bite at the apple in 2022.

However, any modest margin the Democrats could hold in the Senate through the 2022 elections would be at risk in 2024. The only factor in their corner could be that they might be running as the incumbent party in the White House, which sometimes provides a better environment than midterm elections do.