— A couple of high-profile gubernatorial races move further toward Republicans.

— In Georgia, Gov. Brian Kemp (R) appears positioned to win his rematch with Stacey Abrams (D), probably without a runoff.

— In Florida, the questions are more about the size of Gov. Ron DeSantis’s (R) margin and if he will run for president than whether he’ll lose to Charlie Crist (D).

The national battle for control of state governorships remains highly uncertain in several key states across the country. Democrats continue to be on track for a couple of fairly easy pickups in the open, blue states of Maryland and Massachusetts. Five Toss-ups remain: open, Republican-held Arizona; open, Democratic-held Oregon; and the second-term bids by Govs. Laura Kelly (D-KS), Steve Sisolak (D-NV), and Tony Evers (D-WI). All of these races, based on both private and public polling, remain close, although it’s not hard to imagine Republicans doing quite well in those races, given the broader national environment and our understanding of the dynamics shaping the individual races. As per Crystal Ball tradition, we will push all of these Toss-ups to a “Leans” rating sometime between now and Election Eve.

We are comfortable, however, upgrading the ratings for a couple of high-profile Republican incumbents in the Sun Belt.

Although they ultimately broke towards different parties, Florida and Georgia were a couple of the closer states in the 2020 presidential election. Next week, we are expecting their results to be more decisive — and the same party should take both.

Gov. Brian Kemp (R-GA) has, perhaps, been the governor who has most overperformed our early election cycle expectations. When the Crystal Ball issued our first set of ratings for this cycle, back in March 2021, Kemp’s state had just flipped from Donald Trump to Joe Biden. Likewise, the senator that he put into office, then-Sen. Kelly Loeffler (R), was just defeated. The state’s Democratic trend wasn’t the governor’s only cause for concern: Trump, who was upset about Kemp’s selection of Loeffler, and later about the validity of the 2020 election in Georgia, repeatedly trashed the governor. We started his reelection race off as a Toss-up.

But when a pro-Trump challenger eventually emerged, in the form of former Sen. David Perdue (R-GA), Kemp scored a smashing primary victory. Aside from carrying Trump’s water, Perdue didn’t seem to have much of a rationale for running. Importantly, after his landslide primary win, Kemp emerged as a seemingly rare Republican who was “free” of Trump. We wrote at the time that we expected Kemp’s perceived independence to pay electoral dividends — considering his consistent leads in polling, it has, at minimum, not hurt. We upgraded Kemp to Leans Republican immediately following his primary win.

Despite a national profile and brisk fundraising, former state House Minority Leader Stacey Abrams (D) has not quite been able to replicate the energy that underpinned her 2018 effort. To be fair to Abrams, some of the obstacles she faces in this rematch are structural: Kemp now has incumbency, and the national environment is simply redder now than it was 4 years ago.

Still, there may be some candidate-specific factors working against Abrams. After the 2018 campaign, she “acknowledged” Kemp had received more votes, but didn’t formally concede. While Abrams agreed to accept the results of next week’s election, her “denial” of the 2018 results has given Republicans a convenient comeback when Democrats have brought up threats to democracy. Republicans also point to how Secretary of State Brad Raffensperger (R) defended the integrity of Georgia’s 2020 vote (and appears to himself be on course for a second term).

Looking at FiveThirtyEight’s database, every poll with field dates only in October of this race puts Kemp at or over 50% — the threshold needed to clear a runoff. As Abrams typically registers in the mid-40s, it’s easy to see enough undecideds breaking to Kemp give him a few points’ worth of breathing room above the 50% line. Though we expect Kemp to run most ahead of Herschel Walker — the GOP’s nominee for Senate, who is very much not free of Trump — in upscale white-majority precincts, there are signs that, even in a state as racially-polarized as Georgia, that Abrams may underperform with Black men.

Our thinking remains that the Senate race probably goes to a runoff, but we think it’s reasonable to make Kemp a clearer favorite in the gubernatorial contest. Georgia is going to Likely Republican. Even if the gubernatorial contest went to a runoff (the presence of a Libertarian on the ballot makes the scenario a possibility), we would probably still favor the incumbent, although the dynamics of a runoff would naturally be different.

We have noted the potential importance of state Attorney General Josh Shapiro’s (D) apparent lead in the open Pennsylvania gubernatorial race and how it could help Lt. Gov. John Fetterman (D) in the much more competitive open-seat Senate race against television doctor Mehmet Oz (R). Kemp could end up having a similar impact on Walker in the Senate race: If Walker were to get over 50% and avoid a runoff — which we think is unlikely but possible — Kemp’s coattails probably would be a major reason for that happening.

Moving one state to the south, the Crystal Ball has had Florida rated as Likely Republican for the entire cycle, but we are making Gov. Ron DeSantis (R-FL) an even safer bet for reelection. Recently, parts of Florida were hit hard by Hurricane Ian. Though DeSantis’s antics have often been controversial, he has spent the last few weeks overseeing the recovery effort — and making positive headlines in the process.

According to Florida Atlantic University’s polling, over 60% of Floridians gave DeSantis positive marks for his handling of the hurricane’s aftermath. Though they could be running against each other for president in 2 years, DeSantis and President Biden seemed to, at least temporarily, work together on the recovery effort. For former Rep. Charlie Crist (D, FL-13), DeSantis’s party-switching opponent, this was a cruel twist, as Republican lobbyist Liam Donovan astutely observed. In 2009, Crist — then a relatively moderate Republican governor — famously embraced then-President Barack Obama, as the two were promoting the president’s economic stimulus package. Republicans never forgave Crist, who at the time had his eye on a Senate run. In 2010, Crist left the GOP and became an independent in the midst of his Senate campaign, but he lost to now-Sen. Marco Rubio (R-FL), who is favored to win a third term next week. In any case, a bipartisan dynamic between the state’s GOP governor and Democratic president is again a factor working against Crist.

The state’s partisan realities have not trended in Democrats’ direction, either. As state Democratic consultant Matthew Isbell pointed out in a recent blog post, 2022 will be the first general election where Florida Republicans can claim a registration advantage. Map 1, from Isbell, shows the change in Florida’s partisan registration since October 2020. 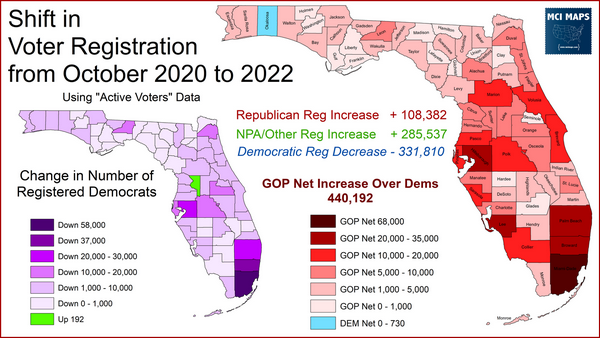 The only county where Democrats made a net gain was Okaloosa, which is still a deeply Republican county. Isbell sums up that, from the Democratic perspective, “every county is bad news.”

Aside from favorable registration trends, the early vote is also looking promising for Florida Republicans. According to numbers from Republican pollster John Couvillon, as of Sunday, close to 2.8 million ballots had been cast, and Republicans partisans have outvoted Democrats 42%-39%. In recent elections there, Democrats have tended to run better in the early vote than they do on Election Day.

At this point, the question is more about the size of DeSantis’s margin than whether he actually wins. If Republicans have a robust enough Election Day turnout, it’s possible DeSantis could win by a double-digit spread — that has not happened in a Florida gubernatorial race since then-Gov. Jeb Bush’s 56%-43% reelection victory in 2002.

At a debate last week, DeSantis, who is widely considered a potential 2024 presidential candidate, refused to say whether he’d serve out a full term if reelected — Democrats have been replaying that moment. In the wake of Hurricane Ian, Crist has also had some success in making property insurance a campaign issue. But Florida Democrats, as a party, have a lot of rebuilding to do — a reality that the results next week might make even more painfully clear. Florida goes to Safe Republican.