— Following the 2019 elections, Republicans retain a narrow 26-24 edge in governorships.

— Gubernatorial races are likelier to defy federal partisanship than House and Senate races.

Map 1 shows the current party control of the governorships. They are split roughly evenly, with Republicans holding 26 and Democrats holding 24. A majority of Americans, a little less than 55%, will live under Democratic governors once Gov.-elect Andy Beshear (D-KY) takes office next month.

Since mid-2017, when Gov. Jim Justice’s (R-WV) party switch left Democrats with just 15 governorships, the party has gained nine total, while in that timeframe the only GOP gain came in Alaska, where a Republican took over from an independent last year. This trend is in keeping with what happens when a party controls the White House: They often lose ground in down-ballot offices.

There are eight Democratic governors of Donald Trump-won states, and four Republican governors of Hillary Clinton-won states. Four of the eight crossover Democrats govern states that are very Republican at the presidential level (Kansas, Kentucky, Louisiana, and Montana), while the other four govern presidential battlegrounds (Michigan, North Carolina, Pennsylvania, and Wisconsin).

One of the four Republicans in a Clinton state holds a swing state (New Hampshire), while the other three are in dark blue states (Massachusetts, Maryland, and Vermont).

Party control of state legislatures, unlike the governorships, aligns almost perfectly along presidential lines. After Democrats captured both chambers of Clinton-state Virginia’s state legislature earlier this month, there are only two state legislative chambers out of 99 total — the Alaska state House and the Minnesota state Senate — that are not controlled by the same party that won them for president in 2016. There are asterisks with both: Alaska has a Republican majority, but it has an independent speaker — who is a former Democrat — thanks to a GOP split, and Minnesota’s Senate might have flipped to the Democrats if it had been contested in 2018 (Nebraska’s single legislative chamber is technically nonpartisan, but Republicans effectively hold the majority there).

This partisanship below the top of the ballot was reinforced in Kentucky and Louisiana. Despite losing the gubernatorial races, the GOP won every other statewide race in Kentucky (the state legislature was not on the ballot this year) and, in Louisiana, Republicans expanded their state legislative majorities, winning a supermajority in the Senate and narrowly missing out on one in the House. That failure to win a House supermajority could have an impact on redistricting next year, as Gov. John Bel Edwards (D-LA) could try to push for a second Democratic U.S. House district in the state. Republicans currently hold a 5-1 majority in the state’s U.S. House delegation, but the state could accommodate a second Democratic district. Republicans could’ve overridden an Edwards district map veto had they won a supermajority, although it’s hard to know how a redistricting fight will evolve following the 2020 census, and party-line votes on that issue cannot be assumed with certainty.

There are only a relative handful of gubernatorial races next year. The big prize is North Carolina, where Gov. Roy Cooper (D-NC) is a modest favorite to win a second term in the only large state that will feature competitive races for president, Senate, and governor next year. The GOP’s best target is the open seat in Montana, and that’s also the governorship likeliest to flip. 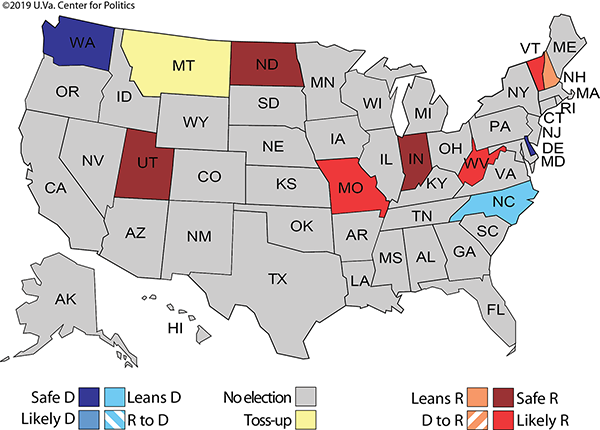