Skip to content
Home
/
The House: Democrats Would Have a Tough Slog Even Without Redistricting

— The reapportionment of House seats and pending redistricting has prevented us from releasing U.S. House ratings so far this cycle.

— While Republicans stand to gain from this process, they would be favored to win the House even if the district lines were not changing.

— Rating the House races based on the current lines shows many more Democratic seats in the Toss-up column than Republican ones. These hypothetical ratings are guided by developments in the 2022 campaign so far as well as the normal tendency for the president’s party to lose ground in the House in midterms.

Assessing the House if the maps were not changing

Every state with more than one U.S. House district will be redrawing their district lines this cycle to account for population changes, and that process is on hold because of delays in the U.S. Census. The Census Bureau won’t be releasing the granular data states need to draw new maps until later this year. While some states are trying to get a head start — Oklahoma, for instance, drew new state legislative districts using older data — we likely will not get a good handle on what new maps will look like until the fall. Among those delayed by the stalled census is us: We have not released House ratings yet as we await the new districts.

House Democrats are facing twin challenges next year: The overall consequences of reapportionment and redistricting, as well as midterm history. The combination of the two will be difficult for Democrats to overcome. But what if they only had to overcome one of these challenges? What if no district lines were changing? Could Democrats hold the House under the current map?

What follows is hypothetical Crystal Ball House ratings of all 435 House districts under the current maps and with the same apportionment as last decade.

Just so we’re clear: These are not real House ratings. We have not rated any 2022 House races yet this year, and we won’t until we start getting finalized maps.

These ratings also mix an alternate reality, in which no redistricting is occurring, with our actual reality, in which redistricting is occurring. This means we are taking into account developments that have happened in the real world that might not have happened in a world where no redistricting was happening. For instance, Reps. Charlie Crist (D, FL-13) and Tim Ryan (D, OH-13) have both announced statewide bids, and both of their seats are Toss-ups as open seats. It may be that the prospect of their districts being made more competitive (Crist) or being eliminated altogether (Ryan) is part of why these two members decided to run statewide. In an alternate reality with no redistricting, they would have nothing to fear from redistricting, so perhaps they would both be running for reelection instead of opting for statewide runs — in which case we would not have their districts as Toss-ups (both would probably be in the Leans or Likely Democratic columns). Redistricting may also be playing a role in what recent reporting has described as likely Senate bids by Reps. Val Demings (D, FL-10) and Stephanie Murphy (D, FL-7) in Florida and Rep. Conor Lamb (D, PA-17) in Pennsylvania. We took these likely bids for higher office into account when formulating these ratings (as open seats, FL-10 is Safe Democratic as currently drawn, while PA-17 is listed as a Toss-up and FL-7 as Likely Democratic).

With those caveats out of the way, here’s Table 1, our ratings for the House if no districts were changing. As per usual, the vast majority of the 435 House seats are not really competitive in general elections. Those districts not listed are rated safe for the incumbent party.

The overall takeaway from these hypothetical ratings is this: The Democrats would be underdogs to hold the House under the current district lines. 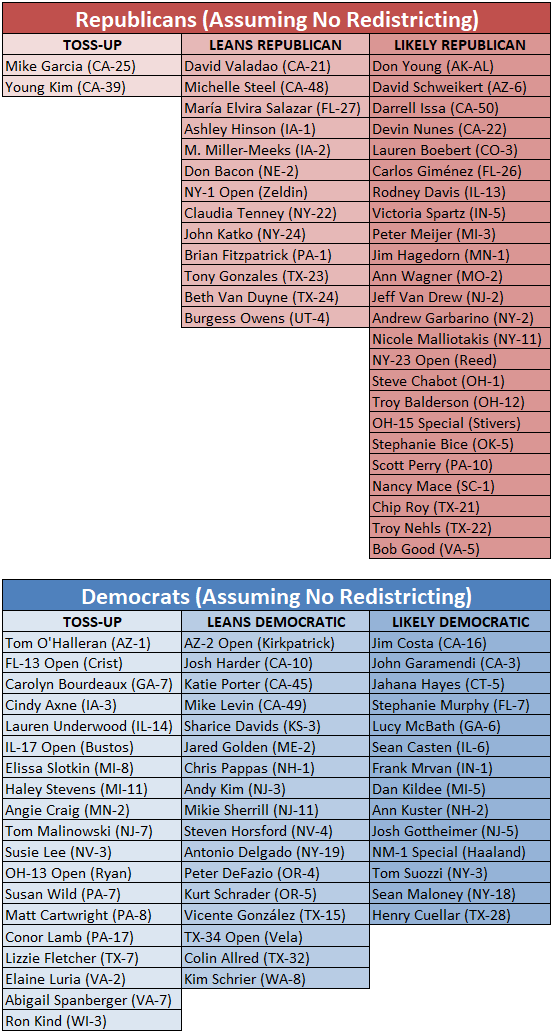 What stands out here is the tiny number of Republicans in the Toss-up column, just two, versus the large number of Democrats there (19).

The Democratic seats held by incumbents in the Toss-up column were all decided by four points or less with just one exception: Rep. Elaine Luria (D, VA-2) won by about half a dozen points in her swingy Hampton Roads seat. However, she has drawn a potentially strong challenger: state Sen. Jen Kiggans (R), who won a competitive state Senate race in 2019. The open FL-13 and OH-13 were mentioned above: Crist won by six points and Ryan won by eight. Several of the incumbents here did not face well-regarded challengers in 2020 but still had close races. Given that most of the members listed here won by roughly two-to-four points in 2020, they can’t afford much slippage, but it has been common in recent years for members of the presidential party to perform worse in a midterm compared to the previous presidential election year. Also included here as a Toss-up is IL-17, a Donald Trump-won district from which former Democratic Congressional Campaign Committee Chairwoman Cheri Bustos is retiring. It’s hard to know how redistricting may have played into her thinking: a Democratic gerrymander could have helped her, although she also may not have gotten much help. In this scenario, IL-17 probably would be a Toss-up even if Bustos was running for reelection: Army reservist Esther Joy King (R), who held Bustos to a four-point win in 2020, appeared poised to challenge her in a rematch and officially entered the race immediately after Bustos retired.

Speaking of rematches, some others figured into these ratings. A number of other Republicans who lost close races in 2020 have already indicated that they will run again, such as veteran Wesley Hunt (R). He challenged Rep. Lizzie Fletcher (D, TX-7) in 2020 and lost by three points. That is a district we might have called Leans Democratic if Hunt wasn’t running again. For the purposes of these ratings, we’re assuming a Fletcher-Hunt rematch. In the real world, a Texas Republican gerrymander could end up making Fletcher’s district safer as a way to shore up Republican chances elsewhere, which hypothetically could prompt Hunt to run somewhere else (or maybe Republicans will hurt Fletcher and improve Hunt’s odds of beating her). Rep. Tom Malinowski (D, NJ-7) holds the most Democratic district of any Democrat in the Toss-up column based on 2020 presidential results — Joe Biden won his district by about 10 points — but Malinowski only won by a little over a point against state Senate Minority Leader Tom Kean Jr. (R), who is not running for reelection to the New Jersey Senate this year and is widely expected to challenge Malinowski in a rematch. Assuming NJ-7 doesn’t change much in redistricting and Kean does in fact run, we’ll probably start this race as a Toss-up in our “real” ratings too (the same applies to the aforementioned VA-2).

Remember, though, that a Toss-up rating does not equate to “sure loser.” This is just a way of illustrating Democratic exposure in the House even under the current lines.

Let’s now turn to the competitive Republican-held districts. Republicans swept the closest House races in 2020: They won all seven races decided by less than 5,000 votes, including victories by six (IA-2), 109 (NY-22), and 333 (CA-25) votes. (Malinowski, the narrowest Democratic winner by raw vote margin, won by about 5,300 votes.) Yet we are starting most of these close GOP 2020 winners in the Leans Republican column.

Why? Because incumbents from the non-White House party very rarely lose in midterm general elections. No Democratic House incumbents lost in 2006 or 2018 when they won control of the House during Republican presidencies, and no Republican House incumbents lost in the 1994 general election, when the GOP won the House majority for the first time in four decades during Bill Clinton’s first midterm. Just two Republican incumbents lost in both 2010 and 2014 when Republicans flipped the House (2010) and then elected their biggest House majority since the Great Depression (2014). There were extenuating circumstances for those incumbents, as noted here. Even in 1998 and 2002, two cycles in which the presidential party bucked the usual midterm slide, only a few non-presidential party incumbents lost in the general election. Five incumbent Democrats lost in George W. Bush’s first midterm, 2002, but all five were hurt by redistricting — a factor we’re ignoring for the purposes of this article, but one that will end up contributing to incumbent losses in both parties in real life. Five incumbent Republicans also lost in 1998 during Clinton’s second midterm, although one of those five — Bill Redmond (R, NM-3) — was something of an accidental winner in a 1997 special election (for more, see our piece from last month on special elections). The other four were either first or second-term incumbents. So while Democrats will go after a number of Republicans, we wouldn’t expect many to lose if no maps changed.

Overall, we have just two House Republicans in the Toss-up column: Reps. Mike Garcia (R, CA-25) and Young Kim (R, CA-39). They represent two of the three most Democratic districts held by any Republican based on 2020 presidential results (Biden won each of their districts by 10 points). Rep. David Valadao (R, CA-21) holds the most Democratic district held by a Republican — Biden +11 — but he previously served in the House and won surprisingly easy reelections prior to a 2018 loss, so we’d give him an edge to start. Rep. Mariannette Miller-Meeks (R, IA-2), whose six-vote margin of victory was so narrow that her Democratic opponent, Rita Hart, tried to get the U.S. House to intervene in the contest, also gets the benefit of the doubt largely because she holds a Republican-leaning district at the presidential level (Trump +4).

A couple of open seats in New York — Rep. Lee Zeldin (R, NY-1) is running for governor and Rep. Tom Reed (R, NY-23) is retiring — also may have been impacted by real-world redistricting considerations: Democrats may be able to gerrymander the state, which could have endangered both members. However, allegations of misconduct also played a role in Reed’s decision to retire, and Republicans would be favored to retain both seats under the current lines.

Unsurprisingly, the 16 House members who represent districts carried by the other party’s presidential candidate — nine Republicans and seven Democrats — are all rated in the competitive Toss-up or Leans Democratic/Republican columns.

We don’t want to dwell too much on the reasoning behind every single rating: After all, these ratings are just hypothetical. If you have quibbles, we’d love to hear from you on Twitter or via e-mail at goodpolitics@virginia.edu.

The larger point of this exercise is that we would start many more Democratic-held seats as Toss-ups than Republican-held ones even if no district lines were changing.

In other words, Republicans already appear set up to significantly threaten the Democratic House majority, and the net impact of reapportionment and redistricting may make their task easier. Republicans are not guaranteed to win the House next year, but the majority is clearly there for the taking.