Skip to content
Home
/
The House’s Republican Bias: Does it Exist?

— Single-member districts, natural sorting, and gerrymandering are the origins of bias in the House of Representatives.

— One form of bias consistently helps House Republicans, vindicating liberal concerns of a structural imbalance. Another form of bias reliably benefits the party that wins control of the House, disrupting claims of a Democratic disadvantage.

Structural bias in the House

The Republican Party’s structural advantage in federal elections has been well documented in liberal circles. Democrats argue that Republicans have so heavily gerrymandered the House that the institution’s legitimacy is at stake.

The origins of bias

Single-member districts mean that a vote cast for a losing candidate will not be represented. Similarly, a vote cast for a candidate over the threshold needed to win is electorally useless. Both of these votes are, to use a harsh term, “wasted votes.” Democrats cast more wasted votes than Republicans due to an imbalance in how party members are distributed among districts. This imbalance is a result of both natural sorting and political gerrymandering.

Natural sorting describes how members of the two parties are distributed across the country. Democrats are heavily concentrated in cities and urban areas; Republicans tend to be scattered among rural, exurban, and suburban districts. There are more districts with very high concentrations of Democratic voters than there are districts with very high concentrations of Republican voters. This Democratic density makes it easy to win individual seats but creates lots of wasted votes. Research by political scientists Jonathan Rodden and Jowei Chen, as well as Rodden’s new book, Why Cities Lose, show that geography and natural sorting are the root of Democrats’ electoral challenges.

Political gerrymandering is the manipulation of electoral districts to favor one party over another. States where one party controls the process often attempt to maximize their party’s representation using tactics called “packing” and “cracking.” Packing is drawing districts to heavily overrepresent the opposition party, wasting as many votes as possible over the winning threshold. Cracking is the opposite: diluting the opposition’s voters into districts so they cannot reach the threshold. Most statewide gerrymanders are a combination of packing and cracking.

The Median District Bias estimates the margin by which a party needs to win the national popular vote (this analysis uses the overall House popular vote unless otherwise stated) in order to win control in the House. If you lined up all the districts from most Democratic to most Republican, the median House district would be directly in the middle: number 218 out of 435 if no third party or independent candidates won seats. This district would tip control of the House. The gap between this district’s margin and the national popular vote is the Median District Bias.

Uncontested districts change this analysis slightly. The national popular vote does not include voters who would have voted in the House elections but did not because there was no candidate from their party running. When these phantom voters are accounted for, Democrats still won the 2018 popular vote by 7.3%, which means Republicans had a 2.6% Median District Bias.

Another way to avoid the problem of uncontested districts is to use the presidential popular vote instead of the House popular vote. Democratic and Republican voters will always have a candidate to support in that election even if they don’t in their district’s House election. Research by David Wasserman of the Cook Political Report tracks the Median District Bias using the presidential popular vote and shows a consistent Republican advantage (and Democratic disadvantage) over the last 50 years. The edge has increased from 2%-3% in the 1980s and 90s to nearly 6% in 2016, vindicating liberal concerns of a structural imbalance.

The Republican Party’s efficient distribution of voters — a result of natural sorting and gerrymandering — is the root of their advantage in the Median District Bias. While Democrats run up big margins in deep blue districts, Republicans spread their votes out among swingier ones. In 2018, Democrats won 195 districts by 10% or more. Republicans won 151 such districts. Democrats had a disproportionate number of voters squeezed into 195 safe districts. While these voters drag the national popular vote leftward, they do nothing to change the median House seat’s margin.

A second possible explanation is voter turnout. If one party disproportionately wins districts with a low turnout, that would lower its popular vote tally without affecting the median district’s margin. The data show the opposite of what we would expect given the Republican advantage in the Median District Bias: Democrats win the districts with the smallest turnouts. In 2018, Democrats won all 30 districts with the fewest votes cast. This stems from the demographics of the Democratic coalition: the party performs better with low-wage, minority, and young people. Democrats win the votes of these low-propensity voters, meaning that they win districts filled with these low-propensity voters and therefore win districts with low voter turnout.

Another measure of House bias is the gap between each party’s share of the national popular vote and their share of seats. This gap is called a “seat bonus.”

In a perfectly proportional system, a party that wins 51% of the popular vote would receive 51% of the seats. The House, though, is decided by 435 individual elections rather than proportional allocation, making such a distribution of seats unlikely. In 2016, Republicans won 51% of the two-party House popular vote (which excludes third party and independent votes) and 55% of seats in the House (241 out 435). The Republican seat bonus, therefore, was 4%.

Figure 1 shows Democratic and Republican seat bonus in the House from 1972 to 2018 using the two-party vote. The 1972 election marked the first full redistricting cycle after the Supreme Court’s “one person one vote” rulings in the 1960s, making it a good starting point for House analyses. 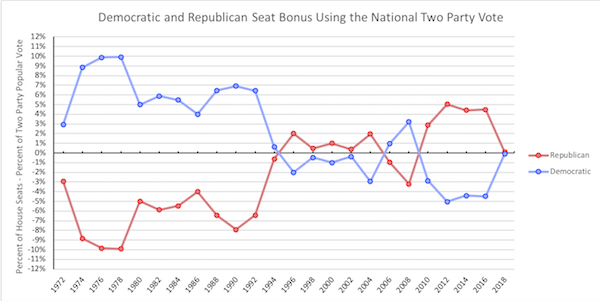 Source: Brookings Vital Statistics on Congress; All data in the graph is rounded to the nearest 1%.

Figure 2 is similar to Figure 1 above, but includes third party and independent votes.

Source: Brookings Vital Statistics on Congress; All data in the graph is rounded to the nearest 1%.

In this graph, the trendlines for both parties are consistently a few percentages higher. When third party votes are included in the national popular vote, both Democrats and Republicans get a bigger seat bonus. The reason for this is clear: third party votes increase the raw number of votes, but rarely translate to real representation in the House.

Democrats and Republicans both benefit from the Seat Bonus Bias when they win control of the House, disrupting claims of a Democratic structural disadvantage. The real penalty is on third parties and independents.

To explain the seat bonus, we need to know what dynamics boost a party’s share of House seats relative to its share of the national popular vote. Such explanations revolve around overperformance in swing seats. This is because small improvements in close races could push a party over the top to win these districts while barely registering in the national popular vote. Imagine that Democrats got a 3% boost in their 10 closest losses o­f 2018. They would have won each of those districts, increasing their House representation by 2% (10 seats out of 435) while boosting their national popular vote total less than 0.1% (around 40,000 votes out of 61 million): a seat bonus of 2.9%. So, what could cause this kind of overperformance in swing seats?

One lies in the sheer number of swing seats, defined here as those won by either party by less than 10%. This range — from +10% Democratic to +10% Republican — covers a scope of 20%. There were 88 such districts in 2018. Election margins on the whole can range from 100% Democratic to 100% Republican, a scope of 200%. Our definition of swing seats accounts for 10% (20%/200%) of all possible results. The 88 swing seats of 2018, though, make up 20% of all 435 House seats. This overrepresentation of competitive districts means that a small increase of a party’s national popular vote could flip a disproportionate number of close races.

Another explanation is the “elasticity” of these swing seats. FiveThirtyEight explains elasticity as “how sensitive [a district] is to changes in the national political environment.” These 88 swing seats of 2018 have a mean elasticity score of 1.03 (and a median of 1.02), meaning that for every 1% change in the national popular vote, these seats will move an average of 1.03% in the same direction. And while this .03% gap may seem trivial, eight seats in 2018 were decided by less than one percent. This amplification in swing seats could push the winning party over the top in competitive races, giving them a seat bonus.

Each of these factors — the incumbency advantage, the overrepresentation of swing seats and elasticity — and more contribute to the Seat Bonus Bias.

According to FiveThirtyEight’s aggregator and adjusting to exclude third party and undecided voters, Democrats lead the 2020 generic ballot 53.8% to 46.2%, a 7.6% margin. As I lay out on my personal blog, the generic ballot is pretty good indicator of the national popular vote. A 7.6% lead in the national popular vote would probably push Democrats past the Republicans’ Median District Bias, allowing them to hold onto the House. Democrats would also probably benefit from the Seat Bonus Bias, giving them more than 53.8% of House seats (234 seats). But it is still early. This number is bound to change over the next 14 months.

And remember, the House is decided by 435 single-member districts, not the national popular vote. With single-member districts come natural sorting and gerrymandering that inject bias and unpredictability into the system. Which brings us back to the original questions: does this bias always work against Democrats, giving them a structural disadvantage in the House? The Median District Bias says yes; the Seat Bonus Bias says no. As with everything in politics these days, the answer comes down to the nature of your bias.