Skip to content
Home
/
The Key to the Senate: Democrats vs. Biden Approval

— This article looks at the 2022 Senate races and compares current trial heat data to the president’s approval rating in these states.

— Historically, in-power incumbents outperform the sitting president’s job approval. This trend is continuing in 2022, and the average of this outperformance is consistent with recent history. On average, Democratic Senate incumbents are running 6.4 percentage points ahead of Biden’s current approval rating.

— Democrats in 4 open seats previously held by Republicans are currently outperforming President Biden’s job approval by 3.5%. This is the highest an in-party has exceeded the president’s approval rating since at least 2006.

— There are obvious signs in the data that GOP candidate quality is hampering their candidates in a number of key Senate races.

— At the same time, Biden’s approval is low enough that it may be hard for some Democrats to ultimately get over the finish line.

The state of play in the Senate

Table 1 includes all polling in states with Senate races with results both for President Biden’s job approval and the current trial heat from mid-August through last weekend. The data in this table contains only polls that have both job approval and trial heat polling (so not every Senate race this year is included). Click on the table to see a larger version with bigger print. 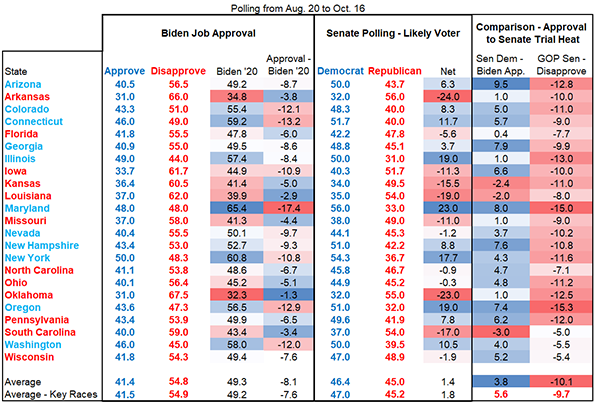 There is a lot of information in this table — here are some key takeaways:

Some have suggested that part of the reason might be the Hispanic vote. Table 2 below summarizes the Hispanic vote in Arizona and Nevada. There IS evidence both Cortez Masto and Kelly are underperforming among Hispanics, though the samples here are small and I would caution about reading too much into these numbers. I track Hispanic approval at the national level, and it is ambiguous overall as to whether Democrats are struggling with them. 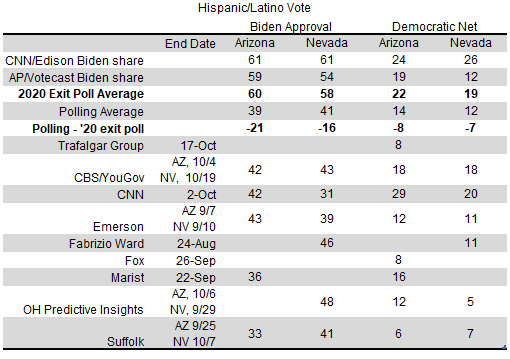 Note: The 2020 exit poll represents an average of the findings for Biden’s 2020 share of the vote and margin among Hispanic/Latino voters in Arizona and Nevada from 2 separate exit polls: Those reported by, among others, CNN, as well as those reported by the Associated Press/Fox News.

2. It is clear from these data that GOP candidate quality is an issue. The gap between Biden’s disapproval ratings and the GOP Senate candidate’s support is about 10% or greater in Arizona (Blake Masters), Georgia (Herschel Walker), and Pennsylvania (Mehmet Oz). These candidates are simply not consolidating the Biden disapproval vote in the way Sen. Ron Johnson is in Wisconsin or Rep. Ted Budd is in North Carolina.

3. Where will independents go? One of the largest sources of the gap between Biden’s disapproval and Republican candidate support is among independents. This gap is surely a surprise and presents the biggest unknown with respect to the Senate races. Given the national environment, can Democrats continue to run as well as they are, or will undecided independents break towards Republicans to articulate their unhappiness with the status quo? Table 3 shows what the polls say about independents. 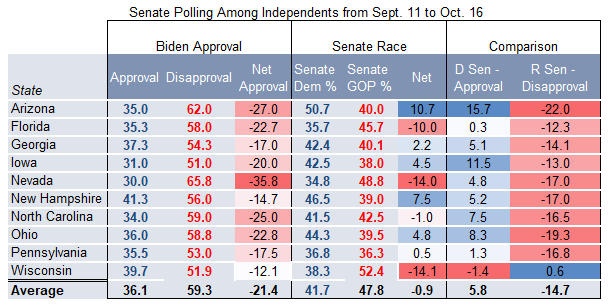 Based on this table, we see that Democratic incumbents are doing about as well as we would expect given Biden’s approval rating (note: the 2006 number for in-power incumbents is affected by 2 races that inflated their number). Surprisingly, Democratic challengers to Republican incumbents are doing significantly better than we would expect. Typically, challengers to out of power incumbents run behind their president’s approval rating. The same is true for Democrats in Republican seats that are now open.

What the data in what are currently Republican Senate seats suggest is this is not your typical midterm. There is little historical parallel for how well Democrats are doing in Republican seats (though the history here is admittedly limited). It is tempting to suggest that the Supreme Court decision in Dobbs is playing a part, and indeed it is certainly true that Dobbs had a significant effect on generic ballot polling, even as the Republicans’ lead appears to be reemerging. Given that inflation is at decades level highs, Republicans should be headed for a ‘94/’10/’14 landslide. That they may not be — at least based on the data we have now — speaks volumes about the state of American politics.