— Several national pollsters conducted surveys on the eve of the convention season in both 2016 and 2020. We compared them to see how the race was different from four years ago.

— Compared to four years ago, the parties are more unified; Biden is leading with independents after Clinton and Trump were tied with them at this point; and more poll respondents support the major party candidates overall.

— In other words, there are fewer undecideds and fewer voters saying they will vote third party.

— Overall, this is probably good for Joe Biden given that he is leading, but Trump still has time to catch up, and unlike Biden, Trump doesn’t really need to win the popular vote to win the election.

As we enter the final day of the Democratic National Convention, it remains to be seen whether either of these virtual conventions will change the presidential race all that much. Joe Biden, the current polling leader, probably wouldn’t mind maintaining the status quo. Donald Trump, who has been behind, needs the race to change.

Overall, though, the contest has been relatively stable. As Alan Abramowitz pointed out in the Crystal Ball earlier this summer, the national polls have been more stable than they were four years ago. And as we headed into the conventions, it appeared that there were fewer voters up for grabs than four years ago. Given that Biden has been leading – just like Hillary Clinton was – we thought we’d look at some of polls from the pre-convention period and point out some differences between the state of the race last time before the conventions compared to now.

Table 1 shows a comparison between four major national pollsters that 1) Conducted polls before the start of the 2016 and 2020 conventions and 2) Made crosstab information about how both partisans and independents were supporting.

For details on the polls, see the notes and sources under the table. The “other” category in Table 1 combines respondents who were undecided or indicated they were not voting for a major-party candidate. 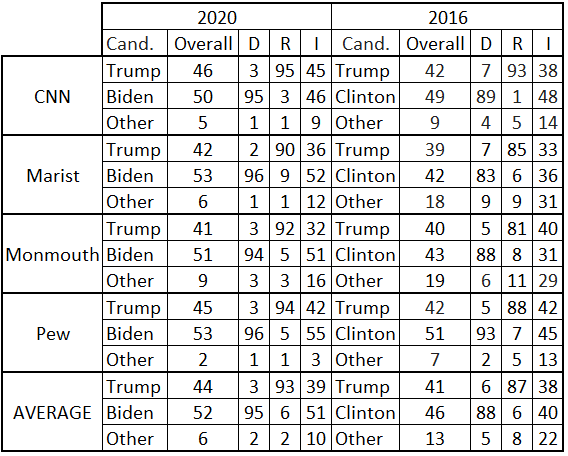 Notes: All polls are of registered voters. CNN’s poll was conducted by ORC in 2016 and SSRS in 2020. Marist’s 2016 media partner was McClatchy, and its partners are NPR and PBS NewsHour in 2020. CNN, Marist, and Pew polls used here in both 2016 and 2020 only named the major party candidates. The Monmouth polls in both 2016 and 2020 included the Libertarian and Green Party nominees by name. Columns may not add up to 100% because of rounding.

There’s a lot to digest here, but there are three key takeaways that we see:

1. The parties are more unified: Both Hillary Clinton and Donald Trump saw their command of their parties questioned at their respective nominating conventions. In Cleveland, Sen. Ted Cruz (R-TX) was booed off the stage after telling delegates to vote their conscience, a pointed non-endorsement of Trump. In Philadelphia, rambunctious Bernie Sanders backers made it clear that there was bad blood from the primary — and a WikiLeaks dump of internal Democratic National Committee emails days before the convention only fueled their discontent.

Still, the convention drama probably overstated party unity problems on both sides. As the average of the four national polls make clear, both Trump and Clinton were in the high 80s in party support. However, that is surpassed by the 95% support Biden is receiving among Democrats and the 93% support that Trump is receiving among Republicans. Convention polling bounces can sometimes reflect a party coming out more united than they were going in; by that standard, perhaps we shouldn’t expect much of a bounce for either candidate, because the parties are so unified already. Trump may have a little more room to grow if he can claw back a point or two of the self-identified Republicans who currently indicate they back Biden.

2. Biden is doing better with independents than Clinton: Independents in American politics can be a little deceiving, in that while they often make up a third or more of respondents in a national poll, many of them are hidden partisans who just happen to call themselves independents. Winning independents is also not necessarily decisive: Barack Obama was reelected in 2012, for instance, despite losing independents, at least according to the national exit poll. That said, independents can decide elections, and Donald Trump’s four-point advantage with them was one of the ingredients in his narrow victory.

In the 2016 polls, the independent vote was mixed: Clinton led, but only by a small two-point margin in aggregate, and more than a fifth of independents in these polls were not voting for Trump or Clinton. In the 2020 polls, Biden has a clear edge with independents in three of the four polls, and the fourth — CNN — is basically tied (it should be no shock, then, that CNN is also the closest of the four 2020 polls overall, with Biden leading by just four points). Note as well that the number of independents in the “other” category, just 10%, is about half that of 2016. And that leads to the final observation.

3. The major party candidates are attracting more support overall: Heading into the conventions, the electorate just seems more comfortable with their choices this time than in 2016, which is reflected in the smaller number of undecideds, third-party voters, and others that we’ve lumped into the “others” category. Overall, in the four 2020 surveys, just 6% of the voters are in the others category, and that might be even smaller had we not included Monmouth, which listed minor-party candidates as an option for voters (the other three polls did not in either year). Meanwhile, on average 13% of voters in the 2016 surveys were in the other category. Trump’s performance among late-deciding voters and voters who held an unfavorable view of each candidate helped him win the election. In general, there seem to be fewer of these kinds of voters this time.

One thing to watch: Does the number of “others” – essentially undecideds or third-party voters – go up, stay the same, or decrease? If Biden maintains the same lead, but the number of “others” rise, that could hypothetically mean that Trump is shaking lose some of his support and could capture it later. Likewise, if the number of undecideds stays the same or even falls, without a corresponding tightening of the race, Trump has an even smaller pool of non-Biden voters to convert.

If you’ve seen analysts — including us — assert that Biden’s lead going into the conventions was more solid than Clinton’s was four years ago, the data presented above illustrate why. Biden’s lead, at least in these polls, was bigger than Clinton’s, and there are a smaller pool of “others” for the two major party candidates to bring into the fold.

That said, the polls are still not at the point where we consider them strongly predictive of the eventual result, and there are all sorts of confounding factors, including turnout and the trajectory of the public health crisis.

We also know that national polls don’t tell the whole story. In 2016, the decisive state in the Electoral College — Wisconsin, a state we analyze in depth in this week’s Crystal Ball — voted about three points to the right of the nation. Trump doesn’t need to be leading national polls, or the eventual national popular vote, to win. But in all likelihood, he does need to get closer than the polls show right now, and the electorate may not be quite as fluid as it was in 2016. We will get a better sense of this after the dust settles from the conventions.